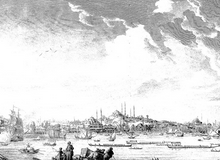 As 29th May 1453 dawned, after a spectacular, two-month siege, Sultan Mehmed II’s troops entered Constantinople, putting an end to the millennial Byzantine Empire. As the world shook, Constantinople became the new capital of the Ottoman Empire.

Extremely quickly, travel accounts dealing with the new capital multiplied and, once published, they became genuine best-sellers. In France, between 1480 and 1609, there were twice as many publications of books about the countries of the Ottoman Empire, wars against the Turks or “Turkish customs and manners”, than about the two Americas, which had recently been discovered. The Ottoman world they described is often reduced to its capital and its political organisation, and rarely seen in its status as an Empire.

In the 16th century, the French travellers who most marked the public’s minds were Pierre Belon, Jean Chesneau, Jacques Gassot, Pierre Gilles (Gilly), André Thévet, and Nicolas de Nicolay whose book appeared in 1568, accompanied by engravings depicting the costumes of the various nations of the Empire and of the state’s main agents. The common point between all these authors is that were connected to the embassy in Constantinople under Gabriel d’Aramon (1546-1553), during a brilliant period that saw the closest rapprochement between François I and Suleiman the Magnificent, accompanied by a remarkable cultural dimension.

German-speaking informers were also present, such as Hans Dernschwam, Ogier Ghislain de Busbecq, ambassador of Ferdinand de Habsbourg. Some of them were accompanied by artists, the most famous of them being Peter Coeck van Aalstet Melchior Lorichs who, for the first time, presented the city’s sites, as well as the Mœurs et coutumes des Orientaux.

Among the important 17th-century accounts mention must be made of those by Pietro della Valle, Michel Baudier, Guillaume-Joseph Grelot, Le Sieur Du Loir, and above all Jean-Baptiste Tavernier, Jean Thévenot, and the king’s botanist Joseph Pitton de Tournefort.

Some tales, in the form of lively accounts of the life in Constantinople, remained in manuscript form, such as the correspondences of Jacques de Germigny, Baron de Germolles, the ambassador of France from 1577 to 1584; or that of Father Robert de Dreux, a Capuchin and chaplain to the ambassador De la Haye-Vantelet, written during the 1660s; that of François Pétis Delacroix, secretary in the embassy in Constantinople from 1674 to 1679, or else Antoine Galland’s diary.

The century of the Enlightenment also witnessed just such a large number of perspicacious and observant travellers, among whom can be mentioned, with no attempt at being exhaustive, Aubry de la Mottraye, the Chevalier d’Arvieux, Jean-Claude Flachat, François Pouqueville, Guillaume-Antoine Olivier, Antoine-Laurent Castellan, Count Antoine-François Andréossy, and Antoine de Juchereau de Saint-Denys.

In the 19th century, the soldiers, diplomats and tradesmen were to be joined by a number of writers (Nerval, Flaubert, Gautier, de Amicis, Edmond About, Pierre Loti, Anna de Noailles, Pierre Benoît), painters (Jean-Baptiste Hilair, Louis-François Cassas, Amadeo Preziosi, Jean Brindesesi), photographers (Joseph-Philibert Girault de Prangey, the Abdullah brothers, Pascal Sebah, Iranian, Henri Duval), explorers, archaeologists, reporters and the first tourists, for Byzantium, Constantinople or Istanbul still attracted interest, admiration, and even covetousness. In 1923, Constantinople/Istanbul was replaced as the capital of the empire by Ankara, the capital of the new Turkey.

Alexandria
Maps and plans of Alexandria