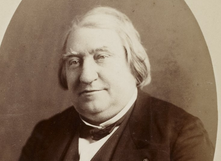 As a constant horizon of his research, the Orient occupied a prominent place in the literary and scholarly production of Ernest Renan, both in his large volumes covering the history of religions, and in his erudite works of linguistics, epigraphy or archaeology.

After entering the Seminary of Saint-Sulpice in 1843, this young Breton acquired a precocious passion for Oriental languages, thanks to the erudition and relative open-mindedness of his Hebrew teacher, Arthur-Marie Le Hir. He made such rapid progress that, the next year (he was 21) Le Hir entrusted him with the Hebrew grammar lessons for beginners. At the same time, he was allowed to take external courses, at the Collège de France and the Sorbonne. He thus attended the lessons of Eugène Burnouf (Sanskrit), Etienne Quatremère (Hebrew, Chaldean, Syriac, Persian), Joseph Toussaint Reinaud and Armand-Pierre Caussin de Perceval (Arabic). In 1845, Renan left the Seminary to begin an academic Orientalist career, which took off brilliantly: the Volney Prize of the Institut for his Essai historique et théorique sur les langues sémitiques en général, et sur la langue hébraïque en particulier – which opened the doors of the Société Asiatique to him in 1847 –, election in 1856 to the Académie des Inscriptions et Belles-Lettres (where, in 1867, he gave the impetus to the creation of the Corpus inscriptionum semiticarum, a collection of Semitic inscriptions on the model of the German corpuses of Greek and Latin inscriptions), and then the appointment to the chair of Hebrew, Chaldean and Syriac Languages at the Collège de France in 1862.

In 1860, he undertook his first journey to the Orient. In charge of the archaeological mission to Phoenicia, he crossed Lebanon, Syria and Palestine. During the final stage, Renan traced out in his notebooks the main lines of his Vie de Jésus (1863), the first volume of the Histoire des origines du christianisme. Through these travel notes, he aimed not only at making observations of the exotic setting for his history, for he also had a far more ambitious project: the instilling of life into his account of the origins of the Christian religion. A second journey to the Orient (1864-1865) took Renan and his wife, Cornélie Scheffer, to Egypt, where they visited Saqqara and the Pyramids in the company of Auguste Mariette, then they went back down the Nile from Aswan to Cairo (an account of this journey, "Les Antiquités égyptiennes et les Fouilles de M. Mariette", appeared in the Revue des Deux Mondes). The journey continued to Lebanon and Syria, and then Asia Minor and Greece. While his first visit to the Holy Land, which gave rise to the Vie de Jésus, was a sort of supplement to his mission, this time Renan’s trip had been programmed: the writer followed in the steps of Saint Paul and the apostles who had founded the first Christian churches, by visiting the lands that they crossed and lived in, so as to give his history “all its colour and life”.

“I shall see Antioche, Tarsus, Patmos, Ephesus, Colossae, Thessalonica, Athens and Corinth” – he wrote to Henry Harrisse on 2nd November 1864 – “The focal point of the effort made in my research will be the study of the environment, the ambient mood, in a sense, in which Christianity developed. I need an Ephesus, Corinth and Thessalonica that have their own characteristics and are unalike. My Churches, which I aim to make the interest and life of the tale, need each to have its own existence”. Renan exploited these notes made during his second journey in the Middle East by extending them in volumes 2 and 3 of his Histoire des origines du christianisme, Les Apôtres (1866) and Saint-Paul (1869). But images and memories of these places also resurfaced in the subsequent volumes: L’antéchrist (1873), Les évangiles et la seconde génération chrétienne (1877), l’Eglise chrétienne (1879), and Marc-Aurèle et la fin du monde antique (1882).

Right up to the end of his life, Renan’s attention remained fixed on the Orient. From 1885 to 1892, the year of his death, he worked tirelessly on the “serious work” of his old age, “the arch of the bridge […] between Judaism and Christianity”: the Histoire du peuple d’Israël, of which three volumes came out between 1887 and 1891, and the last two posthumously in 1893. On several occasions, Renan tried to arrange a third journey to the Orient, with a view to “breathing life” into the protagonists of his new work, but these projects never saw the light of day.

For Renan, as a geographically real territory, but also an ideal place, rooted in the past, the Orient was one of the two principles around which his philosophy of history developed. Thus – not without a certain essentialist determinism, which is often expressed in axiological judgements– the East and the West viewed one other in their different incarnations: Semitic languages and Aryan languages, monotheism and polytheism, Jerusalem and Athens, spiritualism and materialism, religion and science. Human civilisation is a product of the “parallelogram” of these two forces, the heritage of confrontations and the struggle between these two sources.