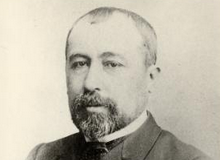 After studying the Coptic language and Egyptology under Eugène Grébaut and Gaston Maspero, Emile Amenlineau took part in the French archaeological mission to Cairo in 1883-1885.

From 1895 to 1898, he conducted the Abydos excavations in Egypt. He taught the Egyptian religions at the Ecole pratique des Hautes Etudes and left behind a number of texts on the Copts. His catalogue of Coptic manuscripts at the Bibliothèque nationale has remained in handwritten format.