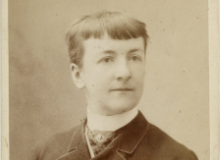 Jane Dieulafoy deservesd, just like her husband Marcel (1844-1920), to stand out in the annals of archaeology. They both became archaeologists in Persia during the initial exploratory mission in 1881-1882, then in 1884-1886 to inaugurate the first large-scale excavations of Susa.

As “indissociable companions” in the eyes of Camille Saint-Saëns, and for the Parisian society that frequented their salon on Rue Chardin in Passy, they both became archaeologists in Persia, which they discovered during the initial exploratory mission in 1881-1882, then revisited in 1884-1886 to inaugurate the first large-scale excavations of Susa. During the primary expedition, which they financed themselves, they crossed the country from north to south on horseback, covering thousands of miles, to make a monumental photographic inventory of Iranian patrimony; it was Jane who took the shots, thus putting together a  record of exceptional quality for publications by Marcel and herself. The Susa mission was officially and financially supported by the Louvre and the Ministry of Public Instruction, under the authority of Jules Ferry, who was aware of the benefit that France could derive from such an enterprise in both diplomatic and economic terms. Nasr-al-Din Shah also gave his permission for the excavations of the site. For the archaeological exploration of Susa, Marcel, who had himself trained as an engineer at the Polytechnique and Ponts et Chaussées, brought in two young men, Babin and Houssaye, the former an engineer, the latter a naturalist, thus forming a genuine team capable of directing large-scale work, while following a rational method. As for Jane, she became a field archaeologist and, as she put it herself, Marcel’s “collaborator”, in particular responsible for all the photographic work, the direction of several sites and holding the excavation’s log book. Above all, she managed the exhumation of the extraordinary friezes of Lions and Archers, and recorded methodically their enamelled bricks, with a view to reconstituting these gems of Achaemenid art at the Louvre, which also housed one of the capitals of leaning bulls that crowned the monumental columns of the Apadana in the palace of Artaxerxes.

Furthermore, Persia brought forth in Jane the vocation to be a writer, which developed constantly after her return to France. So it was that, in 1883 she published in the review Le Tour du monde an account of their first tour (entitled La Perse, la Chaldée, la Susiane, Hachette 1887). The lively interest among a broad public created by this narrative was confirmed in 1888 with A Suse, journal des fouilles. She thus showed herself to be not only a talented story-teller, but also a sociologist, anthropologist and journalist, unveiling to the public the drastic living and working conditions of the Europeans who had set about examining the Orient, so as to reveal its origins. From that moment on, until the end of her life, she pursued the literary career that she had begun with the publication of Parysatis (1890), a historical novel crowned by the Académie Française, set in Susa, which brought to life the monstrous queen depicted by Plutarch. As for Marcel, his five-volume Art antique de la Perse, published between 1884 and 1889, allowed him to start a brilliant scientific career, leading to his election to the Académie des Inscriptions et Belles-Lettres in 1895; the iconography, made up of photographs taken by Jane, attracted the admiration of the international scholarly community.

The renown of the Dieulafoy couple increased even more after the opening of the Persian rooms in the Louvre, which were inaugurated on 20th Octobrer 1886, and when President Carnot gave Jane the cross of the Légion d’honneur, thanks to her contribution to her work in Susa. It also probable that this decision was made in order to honour the newly-wed fighter in the Franco-Prussian War who had decided to join Marcel in the Army of the Loire as an irregular –a critical moment when, for the first time, she adopted male clothing, and which displayed her commitment to a life of action, adventure and creativity. These Persian experiences were confirmed in the dress choices that she continued to make once back in Paris, and which made of her a highly visible “emancipated” woman, an intellectual with an intense life as a writer, lecturer and journalist, who helped to set up the Prix Femina. She thus led a career which was independent from Marcel’s, and apparently fought off the huge disappointment of not being able to pursue the work that had been started at Susa. For, after a long period of uncertainty, the powers that be rejected the Dieulafoy couple, replacing them by Jacques de Morgan (1857-1924), also an engineer, and who in 1889 received from the Ministry of Public Instruction a mission to Persia during which he went to Susa. After successfully directing the Service of Antiquities in Egypt from 1892 to 1897, he was chosen to lead the French Archaeological Delegation in Persia, the greatest archaeological project ever to have been organised by a European country.

Jane and Marcel were to have many opportunities to work together, given that they made numerous research tours of Spain and Portugal, after which Marcel published L’Art de l’Espagne et du Portugal (1903), and Jane a series of monographs about certain Spanish provinces, as well as a biography of Isabelle la Grande, published posthumously in 1920. When war broke out in 1914, Colonel Dieulafoy asked to be reappointed to the Engineers and was sent to Morocco, under the orders of General Lyautey, the Governor General. Jane was no more hesitant than in 1870 and, resolved to illustrate her project for the employment of women in the army, she left Paris with Marcel on 10th September. In Rabat, Marcel Dieulafoy submitted to General Lyautey a proposition for an archaeological exploration of the site of the Hassan Mosque, as part of the policy for highlighting the monumental and historical heritage of Morocco, as conducted by the Governor General. Overworked by the Engineers, Marcel put Jane in charge of the excavations, and she successfully brought to light all the ruins of this 12th century mosque (M. Dieulafoy, La Mosquée d’Hassan à Rabat, Paris, 1920). Furthermore, the exploration of Volubilis was also being considered, and Marcel was asked to draw up a project for the future excavations. As for Jane, the aid which she gave to the local dispensary and to the ambulance service led to her death in Pompertuzat, near Toulouse, on 25th May 1916. In August 1916, Lieutenant-colonel Marcel Dieulafoy went back to the northern front and active service under the orders of General Foch.