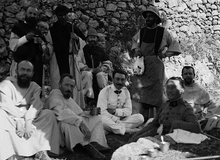 Antonin Jaussen, who arrived in Palestine in the late 19th century, was a companion of Père Lagrange, the founder of the Ecole Biblique et Archéologique Française of Jerusalem, and a witness to and sometimes an actor in the major historical events that marked the Near East from the end of the Ottoman Empire to the era of Nasser.

Born on 27th May 1871, into a modest family in Ardèche, Jaussen lived out his adult life in the wide world, far away from his provincial origins. His secondary education in an Apostolic school in Poitiers, run by Dominican monks, led him to pursue his studies at Rickholdt in Limburg (Netherlands), after the initial expulsion of the monks from France in 1880. He then left for Jerusalem where Père Marie-Joseph Lagrange was preparing to open a new Biblical School in Jerusalem, set up on the request of the Holy See and the Dominican Order, in order to confront the crucial questions that scientific progress was posing about the historicity of the Bible.

In Jerusalem, Jaussen was in the company of other young monks, some of whom were very promising, such as Louis-Hugues Vincent and Raphaël Savignac, who were to form with him and Lagrange the kernel at the basis of the foundation of the École biblique de Jérusalem. Before long, Jaussen displayed a genuine gift for languages and also a practical sense and a taste for the Orient, which led Père Lagrange to entrust him with the “Biblical caravans”, those visits to biblical and archaeological sites which the school regularly offered its students.

A passion for the Bedouin world

Jaussen took an interest in the life of the Bedouins, about which he wrote his first book in 1907: Coutumes des Arabes au pays de Moab. With his colleagues, he then conducted expeditions in the entire region: to Petra and Palmyra, ancient Nabataean cities, but also further afield, for in 1907 he launched an exploration of Northern Arabia. This was a risky venture because the Muslims of the Hejaz did not like to see “infidels” coming anywhere near Mecca. Provided with firmans by the Sublime Porte, Jaussen and his companion Savignac, an epigraphist and photographer, conducted three expeditions to Meda’in Saleh (1907, 1909 and 1910), which led to the publication of five volumes which are still reference works today: Mission archéologique en Arabie. When he was back in Jerusalem, he gave language lessons and had several pupils who were destined to brilliant futures, such as the future Cardinal Tisserant.

An intelligence officer during the First World War

When the First World War broke out, Jaussen was one of the monks whom the Turks attempted to deport to Asia Minor, but Pope Benedict XV managed to get them repatriated to Europe. No sooner had he left the shores of Palestine, than his destiny was transformed: the purser of the British ship that inspected them at sea was aware of Jaussen’s work on the Bedouin tribes, and suggested putting him at the service of the British Admiralty in Port Said as an intelligence officer. He readily accepted and started with a masterstroke: thanks to his network of informers, he warned the British that the Turks were about to attack the canal de Suez from the desert, which everyone thought to be impossible. But this is exactly what happened on 5th February 1915. Forewarned, the Allies had had the time to organise their defences and saved the canal, the control of which was strategic in this region. As a man of action, Jaussen did not remain sitting in his office: he acted as an intelligence officer on a number of ships in France’s 3rd Squadron in the Mediterranean.

The meeting with T.E. Lawrence

For this reason, he was to witness some major events, for he was at El Oujdi, a port on the Red Sea, during the negotiations that took place in February 1917 to prepare the secret Sykes-Picot Agreement. It was here that he met the famous Lawrence d’Arabie, who he advised about the right places to blow up the Hejaz railway, which the Turks were constructing with the assistance of Germany. A taste for the desert and a love for the Bedouins brought them together. French military archives have conserved a large number of notes drafted by Jaussen and which are, in the opinion of Professor Henry Laurens who has studied them: “a capital source of information about military operations in Palestine, the situation in Transjordan and above all the political evolution of Palestine and the beginning of the political confrontation between the Zionists and Arabs”. “His political perception was remarkable,” Laurens continued, “and his reports provide information that cannot be found anywhere else about the history of Palestine and Transjordan during those troubled times.” Meanwhile, during his travels, Jaussen continued to collect academic notes which he published in the Revue biblique, for he remained both a monk and a scholar.

On returning after the Great War, he had problems finding a place in the biblical school, for a younger generation had taken over. The brilliant Assyriologist Paul-Edouard Dhorme became the school’s director in 1922. In 1920, on the request of the Académie des Inscriptions et Belles-Lettres, the École Biblique became also the École Archéologique Française, because of the quality of the work it conducted, to which Jaussen had contributed.  As for Jaussen, he took refuge in Nablus, a traditional Palestinian town, as yet untouched by Zionism, but whose land was starting to be bought up by the first Jewish colonists. His study, published in 1927 as Naplouse et son district, drew the attention of anthropologists who hailed its author’s perceptiveness and accuracy.

In Cairo, a witness to the rise in Arab nationalism

That same year of 1927, Jaussen left for Cairo, at Lagrange’s request, to found a branch of the École Biblique to train students in archaeology and Egyptology. This project worried certain people, who feared that it would compete with the Institut Français d’Archéologie Orientale, founded in 1890. Jaussen, who had quite a character, had to struggle to get himself accepted, find funding and build what was to become, by the late 1940s, the Institut dominicain d’études orientales du Caire (IDEO), of which Jaussen can also be considered to be the initial founder. For, he rapidly noticed the rise in Arab nationalism and the interest of living in this country, studying it and frequenting its elites. Jaussen spent the last 25 years of his life in Alexandria and returned to France only to die, on 29th April 1962. He had been a witness and sometimes a player for almost a century, living at the heart of history as it was unravelling.

L'École des Jeunes de Langue : at the origin of dynasties of dragomans
Bills of exchange: “The perfect merchant, or general instruction….”