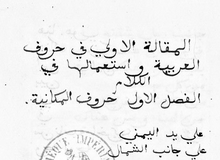 Studying under Silvestre de Sacy, from 1806 he took up duties as a dragoman and consular official first in Cairo and then in Alexandria.

He built up a collection of some 1500 manuscripts, including a significant corpus of Koranic parchment leaves harking from a collection at the Mosque of Amr ibn al-As in Old Cairo, personally chosen for the variety of their writings with a view to developing an Arabic palaeography.

His collection, also comprising Arabic manuscripts, a few Persian and Turkish manuscripts from different periods and texts written at his request in their language by students at Al-Azhar from various backgrounds, was acquired by the Bibliothèque Nationale (then known as the Royal Library) from his heirs in 1833.