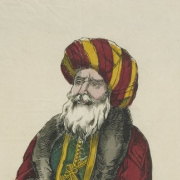 Middle Eastern politics, since the end of the 19th century, have often been described as the age of access to “modernity”. The political modernity in question here is not singular, but multiform and paradoxical, based on ideas and crises, it radically transformed the region, from the Empire to nation states.

Ideas, first of all. What is called the Arab renaissance (Nahda) was a multiform intellectual and artistic movement which also led to the elaboration of a certain number of key concepts in the modern politics of the region: reforms, freedom, autonomy and rights. In the throes of what some have called the “liberal era” there was a creation of categories in which the politics of the region were formulated for some time.

The era of reforms (Tanzimat – 1839-1909) was a series of transformations which were also administrative and technical. They affected the very organisation of the imperial Ottoman state, from the management of taxes to land distribution, without forgetting the structure of the army and the establishment of a modern police force. These different registers were backed up by the transfer of technologies and borrowings from the European corpus (the Napoleonic code is the best-known instance, but mention should also be made of the organisation of gendarmeries and commissariats, or conscription). This also concerns the Constitution (Kânun-u esâsî), which the Empire adopted in 1876, thus rounding off its reform by becoming a constitutional Empire, guaranteeing basic freedoms to all of its subjects, who were now “indistinctly called Ottomans”.

Alongside these transformations of the central state and its provincial incarnations, there was also a development of nationalisms. Firstly came claims for autonomy and the elaboration of new forms of relations between the regions and the centre in the context of the empire – especially in the form of an important discussion about administrative decentralisation. The definition of nationalities is a variable one, which means that they were linked to confessional, regional or even linguistic identities – often with a combination of these elements). The link between these national claims and the changes associated with the reforms was initially quite direct, but above all extremely dialectic, given that the artisans of the reform subsequently worked in favour of separatisms and decentralising reforms, conceived as an extension of the Tanzimat. So it was that the primary basis of Ottoman reform was constituted by the Hatti-cherif of 1839 that guaranteed the goods, life and honour of all the Empire’s subjects without distinction, and organised tax collection under the authority of a multi-confessional Divan. This was a first step towards the transformation of the status of the Dhimmis, hitherto protected by the Empire and powers, without accessing a genuine legal equality, towards that of Millet, or constituted communities. The transformations that affected the status of minorities, especially the Christians, accompanied the growth of “inter-confessional violence” (Damascus in 1846, Lebanon and Syria in 1860, massacres in the Vilayets of Armenia in 1895-1896). They also lie behind the first independencies won in the Balkans (Serbia and Rumania in 1878, Bulgaria in 1908). These apparent contradictions were the fruit of events that shook up the Empire at the time, affecting the adoption of reforms, and revealing the dysfunctions of the imperial machine when confronted with its own transformations.

A certain number of crises and key events should be mentioned to gain a better understanding of what was then at stake. The period of reforms was punctuated by crucial episodes, which were not all of the same nature, but which helped to forge the Middle East, as we know it today.

The expedition of Bonaparte to Egypt is traditionally considered to be a major turning point for the region. It was the first act in the direct European presence in the Ottoman Empire, if we exempt the interventions made in the name of the system of Capitulations and the “protection” of minorities. It is also thought to have opened up a period of development and openness for the region itself, in particular allowing the local dynasty to become independent in relation with Istanbul. The launch of public works, urban development, travels and translations, and the reception of a European immigrant work force (mostly Italian and Greek), all contributed to the arrival during the course of the 19th century of what might be termed a cosmopolitism in port towns such as Alexandria, Beirut or Haifa. An Ottoman merchant bourgeoisie came into its ascendancy, organising trade – especially textiles – between the “country” and establishments situated overseas. And it was Cairo that welcomed both intellectuals and political opponents after 1876, as well as in 1908.

Thanks to its status as a new modern capital, and its military power, the Egypt of Mehmed Ali Pasha took over some of the Arab provinces between 1831 and 1841. This brief occupation above all affected Bilad al-Sham, accelerating the development of a more open and modern economy. It can also be said that it led the imperial authorities to take a more direct interest in reforming the Empire, under the pressure of both internal and external influences.

Despite the adoption of reforms, the authoritarian nature of the Empire remained striking, and freedoms were suspended in 1878. The Young Turk revolution of 1908 demanded the reintroduction of the Constitution. It put into power a new generation of government officials, with new military and civil elites. It also made more visible the oppositions and separations between nationalities, while the central elites of the Committee of Union and Progress progressively put into place what was increasingly a police state, crossed with a growingly aggressive Turkish nationalism. This authoritarian trend became felt as early as 1909. Already visible during the Balkan wars, the divorce between the populations of the Empire and the central government widened during the First World War. While many provinces and communities were mistreated and deliberately weakened or aggressed (famines, assassinations of opponents in public places, purges of the army or institutions), it was the Armenian population that was most directly concerned, in what became the genocide of 1915-1916. The large-scale massacres that occurred during the war come over as major echoes of the inter-confessional violence that had thrived since the early 20th century, mainly aimed at the Armenians but also occasionally other communities.

The end of the First World War, and the treaties that attempted to give it resolution, confronted what was now being called the “international community” with some serious questions: giving justice to martyred peoples, while providing room for a Turkish state buoyed up by a new revolution, built on the ruins of the Empire. It was also a way for imperial European powers to share zones of influence in a classic way (especially thanks to the “secret” agreements of Sykes-Picot in 1916), thus sidestepping promises for recognition and the desires for independence expressed by the inhabitants of the region. Between exchanges of populations, the settling of scores and revolutions, the mid-war period was marked by an agitation which was the fruit of dysfunctions and disappointments caused by the fall of the Empire.