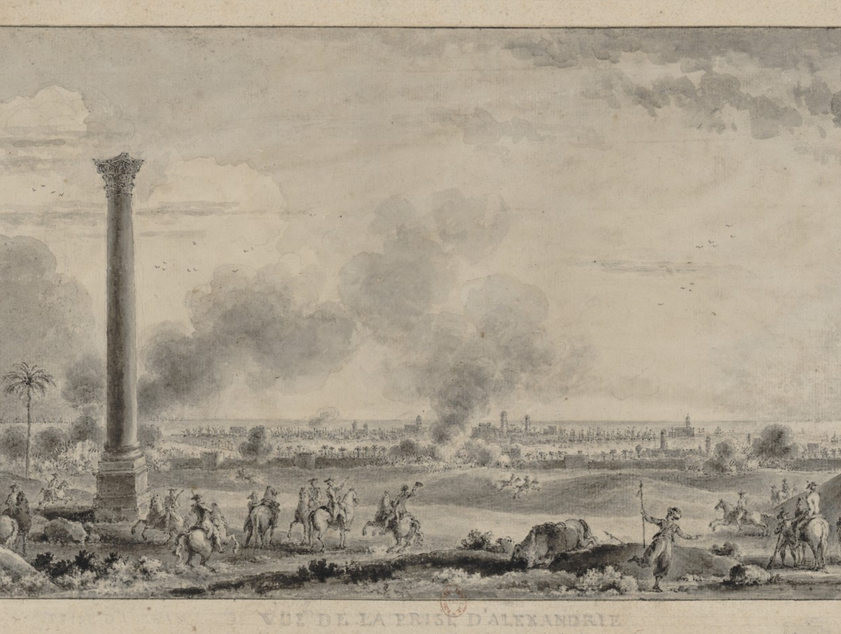 The Egyptian Campaign
Charles-Eloi Vial, palaeographic archivist, doctor of history, curator at the Department of Manuscripts at the BnF
Access to documents

As a major turning point in the relations between France and the Orient, the Egyptian Campaign, undertaken by the Directory in 1798, was the concretisation of a dream of conquest, which went back to the reign of Louis XIV.

The diagnosis of French diplomats and soldiers, confirmed by the accounts of 18th-century travellers, was that Egypt was a country drawn between the distant authority of the Ottoman Empire, and the more violent domination of the Mamelukes. Deprived of any organised army or strong administration, this faraway land was thus considered by the Directory to be an easy conquest, in a context of a European war, in which it was thought to be necessary to open a fresh front against England. From an economic point of view, Egypt would provide France with an opening towards the trade routes of the Far East, given that French tradesmen had previously had difficulties establishing themselves in Cairo or Alexandria. Furthermore, ancient Egyptian art and culture had fascinated Europe ever since the publications of accounts by scholarly travellers in the 17th century. Finally, the appointment of the young General Bonaparte to lead the Army of Egypt allowed the Directory to rid itself of an ambitious soldier, capable of planning a coup d’état. The expedition that took sail from Toulon on 19th May 1798 included 40,000 soldiers and 10,000 sailors, on over 400 ships, without forgetting about 150 scholars.

After taking Malta in June, on 2nd July Bonaparte and his fleet arrived off the coast of Alexandria, which was soon taken from the Janissaries. On 21st July, during the Battle of the Pyramids, Bonaparte defeated the Mamelukes under Murad Bey. The next day, he set up his base in Cairo, from where he intended to organise the methodological conquest of the country. On 1st August, the first Battle of Aboukir witnessed the destruction of the French fleet by a British squadron: the French army were now prisoners in Egypt. Behaving like a genuine sovereign, Bonaparte set about reforming the country according to the French model: celebration of republican holidays, the opening of newspapers, reorganisation of the local administration, reform of tax collection, led by the French, but with the help of local notables. The foundation of the Institut d’Egypte, with the scholars who had come from France with Bonaparte, allowed for the launch of research into the topography, history, art, archaeology and culture of modern and ancient Egypt.

Meanwhile, the army had suffered heavy losses, and the Cairo Revolt on 21st October showed that the submission of the country was not complete: the Mameluke leaders Ibrahim Bey and Murad Bey took refuge in Upper Egypt, while a guerrilla war raged in Lower Egypt. Once these disturbances had been put down, Bonaparte learned that the Ottoman Empire had declared war on France and that Jazzar Pasha had occupied the fort of El-Arich, on the frontier with Palestine, thus forcing him to lead a military expedition there. When the fort had been taken, the French army marched on Gaza, and then the highly strategic site of Jaffa, where violent combats against the Ottoman troops took place from 3rd to 7th March. The conquest was followed by an outbreak of the plague. Nevertheless, Bonaparte failed to take Acre from its Ottoman garrison, supported by reinforcements from the British Royal Navy. Thus, this four-month campaign ended in failure.

Exhausted, the Army of Egypt returned to Cairo in June, before leaving again at once for Alexandria, where the Second Battle of Aboukir took place on 25th July, with Bonaparte finally managing to defeat the Ottoman army, supported by Sidney Smith’s British fleet. This victory gave the French a little respite, but a lasting conquest of Egypt was clearly untenable. Bonaparte secretly embarked for France on 23rd August. He left General Kléber in command, and returned to Paris to seize power. Despite a further victory at Heliopolis on 18th March, the assassination of Kléber on 14th June destabilised the French. His successor, General Menou – who had converted to Islam – held onto Egypt until 31st August 1801, when he surrendered. He obtained from the British the right to repatriate his army to France.

Though a military failure, the expedition was successful from a scientific and cultural point of view. The discovery of ancient Egypt fascinated artistic and scholarly Europe. Legends surrounding the campaign became part of the imperial regime’s propaganda, before nourishing the Napoleonic myth. This discovery of Oriental civilisation was a shock for many of the French: the “return from Egypt” style became all the rage under the Consulate and the Empire, while Orientalism flourished in the French arts for several decades. Research into the civilisation of the pharaohs also thrived, from the monumental Description de l’Egypte (1809-1829), down to the decipherment of hieroglyphs by Champollion (Précis du système hiéroglyphique des anciens égyptiens, 1824), without forgetting the opening of the Egyptian museum by Charles X in the Louvre in 1826, or the unveiling of the obelisk of Luxor on Place de la Concorde in 1836. For decades, competition between French and British Egyptologists was rife. France and Egypt kept up a special relationship throughout the entire century, concretised by travel, trade and diplomatic exchanges. The expedition to Egypt, a bloody conflict, of uncertain utility, nevertheless allowed Egypt to open out to the world and to begin the exchanges with Europe that were to develop throughout the 19th century.

Politics
The Missed Opportunity of the 1936 Franco-Syrian Treaty