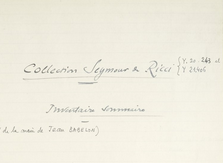 Egypt featured most prominently during the first part of Seymour de Ricci’s career, when this man of letters, art historian and collector served as representative for the Ministry of Public Instruction (now the Ministry of National Education) there in 1905, and again in 1908-1909.

Later, he went on to leave a number of publications on the history of books. He bequeathed part of his collections, including a series of papyrus, to the Bibliothèque Nationale.