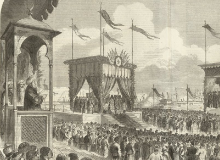 The Suez canal
Caroline Piquet, associate doctor in history, lecturer in modern history at the University of Paris-Sorbonne
Access to documents

As early as Antiquity, the Suez isthmus was a zone of exchanges between the Mediterranean Sea and the Red Sea. Over the course of history, there were several projects to pierce it.

In the 16th century, the project was above all raised by Venice, to facilitate its trade with the East. However, it was only with Bonaparte’s expedition to Egypt in 1798 that the first studies were made. In 1801, the expedition went home, but the surveys between the two seas made by its engineers, even though erroneous, concluded that a canal was feasible. In the 1840s, the boom in exchanges in the Indian Ocean and the Far East, associated with the development of steam navigation, revived interest in a maritime link between the two seas. This would provide the huge advantage of shortening the distances between Europe and Asia, compared to the route around Africa via the Cape of Good Hope. To such technical and commercial arguments, the Saint-Simonians added the idea of a rapprochement between the East and the West, as well as the harmonious development of the world’s wealth thanks to trade. In 1846, they founded the Société d’Études sur le Canal de Suez; however, they failed to obtain the agreement of Abbas Pasha, the Viceroy of Egypt. A good ten years later, the diplomat Ferdinand de Lesseps, a close friend of the new Viceroy Muhammed Sa’id, confronted the hostility of Great Britain and of the Sultan of Constantinople, and obtained a Firman for the concession. He could thus set up a company devoted to digging and exploiting the future canal between the two seas for a period of 99 years.

On 25th April 1859, the work began. Because of its amplitude, the difficulties and the site ˗ desert land on the confines of the Sinai ˗ the excavation of the isthmus of Suez is one of the 19th century’s major construction projects. Man’s mastery over nature, the creation ex nihilo of urban centres, and the installation of populations are all factors that made this project exceptional. Within ten years, the Suez isthmus was transformed: around the construction sites, camps appeared, which soon took on the dimension of towns – Port Said on the banks of the Mediterranean, Ismailia half way along the canal, and Suez at its outlet into the Red Sea – which were not yet very well organised, but which also affirmed their cosmopolitan character. On 18th August 1869, the two seas were linked at the Bitter Lakes. The opening ceremony of the canal to navigation was arranged a few weeks later; on 17th November 1869, the inauguration of the canal was a world event, where France was the guest of honour, with the presence of the Empress Eugénie.

After the opening of the Suez Canal to navigation, a new era began for global exchanges. Great Britain, hitherto hostile to the project, recognised its mistake: as soon as the canal opened, it became its main user, and remained so until the 1950s. For Egypt, the canal thus opened a new chapter in its history. During the inauguration, the country celebrated its creation ostentatiously. And yet, a few years later, the canal became a symbol of the financial dispossession of the country by the great powers. Egypt had greatly contributed to its financing, paying half the costs, thus increasing its debt in a disturbing way. In 1875, on the verge of bankruptcy, Khedive Ismail was forced to sell to Great Britain his 44% interest in the shares in the Suez Canal Company. In 1882, the British occupied the country and declared themselves as the de facto guardians of the canal’s security. Finally, the Egyptian’s sovereignty over the canal received its coup de grâce in 1888, when the Convention of Constantinople gave it the status of an international sea route. Three years later, Ernest Renan, while celebrating Ferdinand de Lesseps’s work before the Académie Française, summed up the dispossession of Egypt’s rights over the canal, to the profit of the western world, as follows: “A land that is so important to the rest of the world could not belong to itself; it has been neutralised to the profit of humanity”.

The canal then became a major issue among Europe’s capitals. For Great Britain, it stood as the essential factor in the mastery of the Mediterranean and the control of the passage to India. Its strategic position thus placed it at the heart of the battles on the Eastern front during the two World Wars. But the canal also stood as a considerable commercial preoccupation; in the last quarter of the 19th century, it established itself as one of the main routes for the globalisation of exchanges. By reducing the distances between Europe and Asia, it accompanied the development of sea trade and the expansion of colonial empires.  For, the canal lessened by one half the journey between Europe and India: Marseilles to Bombay, via Port Said, now measured 4,553 nautical miles, against 10,424 via the Cape of Good Hope; the London to Bombay trip had been reduced from 10,721 nautical miles via the Cape, to 6,260 via Suez. For travellers, this saving of time was greatly appreciated: in the early 1870s, when two or three months were required to travel from Marseilles to Bombay via the Cape, now just one month was needed via the isthmus.

Thus, at the end of the 19th century, the Suez Canal participated actively in the diversification of exchanges and the growing integration of markets. To celebrate this new era, a colossal statue of Ferdinand de Lesseps was erected at the end of the jetty in Port Said where ships came into the north entrance to the canal; the plinth bore the following inscription: Aperire terram gentibus (to open the earth to the nations).Half a century later, the statue was blown up when, in 1956, Colonel Nasser decided to nationalise the Suez Canal Company, thus bringing to an end Europe’s political and commercial domination over the Middle East and Asia.

Image caption : Opening of the Suez canal : blessing the canal at Port Saïd, in presence of the imperial and royal visitors. 1869