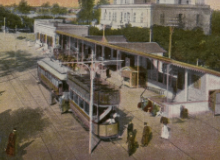 Shortly after the opening in Cairo of Egypt’s first electric tramway, in 1898 Alexandria acquired a similar network in the town centre, before the railway which had, since 1860, served Ramleh, a holiday resort to the east of the city, was also electrified.

In 1800, the sandy coastline to the east of Alexandria which is called Ramleh (“sand” in Arabic) was a desert land, and yet several wealthy Alexandrine families gradually started building holiday homes there, thus transforming it into a little Riviera.

On 6th August 1860, the Egyptian government took on a British engineer, Sir Edward St. John Fairman, to build a railroad between Alexandria and Ramleh and, on 31st October, the Egyptian Ministry of Foreign Affairs awarded him a concession.

The Strada Ferrata tra Alessandria e Ramleh company was founded in Alexandria on 16th April 1862. Messieurs S. O. Schutz, J. B. Seffer, B. Fleming, H. Bulkeley and C. Tortillia, members of the board, are considered to be the founders of this line, and accordingly several stations bear their names.

The first rails were laid in September 1862, in the city, by the terminus for Ramleh, which was built near the so-called “Cleopatra’s Needles”. The first train, pulled by four horses, left the station on 8th January 1863. In August that year, horse teams were replaced by steam locomotives.

On 1st October 1865, the company concluded an agreement with the postal service for the transportation of mail to the offices set up in the new stations.

The Alexandria and Ramleh Railway Company Limited, which ran the line as of March 1883, included members from the great Alexandrine families, of Greek or Armenian descent, as well as foreigners.

Little by little, the network was extended eastwards and, by 1901, included twelve stations as well as the main terminus, as indicated in tourist guides and depicted in many post-cards.

As of 2nd June 1898, the board of the Alexandria and Ramleh Railway Company Ltd decided to replace the locomotives with electric engines but, for financial reasons, this operation was carried out only five years later. On 31st December 1903, the first electric trains went into service and the overall electrification of the network was completed on 25th January 1904. The post offices then disappeared from the stations, and were repositioned close-by.

In the years 1900-1920, post-cards also show the transformations of the city of Alexandria and the development of public transport, as a symbol of modernity. The network was regularly used by the Alexandrine wealthy who had holiday homes in Ramleh and wanted to remain in touch with the city and its social events. Tourists and dilettantes could easily access all the coastal resorts served by the tramway, while students and teachers took it to go to Victoria College which, as of 1909, marked the line’s terminus.

Still today, the “Blue” trams of the Alexandria-Ramleh line carry hundreds of thousands of Alexandrines every day.