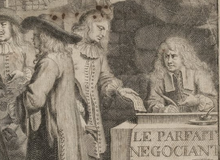 In the 17th and 18th centuries, Le Parfait négociant de Savary, republished eight times between 1669 and 1775, was the reference work when it came to trade practices, especially concerning bills of exchange which, since the Middle Ages, had made it possible to transfer funds throughout Europe. For each financial centre, the book specified the ways to calculate exchanges and commissions on bills of exchange.

The exercise of trade in the Levant was disrupted by the lack of financial structures. European merchants had to take to the Ottoman Empire metal coins, forged in gold, while the Ottoman currency was forged in silver. For the French, the exportation of metal coins to the Levant was forbidden because of the mercantilism practised by the French monarchy. So, trade had to be carried out through the exchange of merchandise. This procedure soon showed its limitations and the need for metal coins became vital. Bills of exchange mitigated this difficulty.  In the Échelles of the Levant, given the absence of moneychangers and merchants who were sufficiently wealthy, French merchants had just one go-between: the Pascha who was master of the region and of the Échelle.

The transfers by sea or land of taxes due to the Miri, or state treasury in Istanbul, were regularly looted by corsairs, in particular from Malta. But now, the Pascha could transfer funds to the capital in complete security. A bill of exchange issued in Acre by the Pascha for a French merchant could be banked in Istanbul by one of his counterparts. This practice, which was simple in principle, turned out to be far more complicated. Negotiations for a bill of exchange could last up to two years. The sometimes dishonest behaviour of merchants when banking a bill of exchange could anger the Pascha, who would then turn against the French merchants who had issued it. The introduction into the Levant of fake metal coins was another cause of violent reactions from Ottoman officers.

In the 19th century, the Ottoman Empire was threatened by dislocation because of centrifugal forces associated with nationalities which were undermining it, and the territorial ambitions of such great powers as Austria and Russia. The Porte needed to reform and modernise its states. Everything required attention because of the under-development of the Empire, when it came to administration, education, the army and infrastructures  The first reforms, which were initially timid, only reached a greater amplitude with the policy of Tanzimats or reforms adopted between 1839 and 1878.

When it came to bills of exchange, the French merchants in the Levant during the first half of the 19th century no longer came under the responsibility of Ottoman officers, but instead Levantine merchants whose prosperity thus increased. The activities of French residents were favoured, by the abrogation in 1835 of the legislation dating from the Ancien Régime, which governed the presence of the French in the Levant. However, contrary to the report that recommended their abrogation, care was taken to conserve the Capitulations, which guaranteed exterritoriality for French citizens, just as they did for other European nations. The Ottoman Empire’s need for capital provided the Europeans with the opportunity to impose biased trade agreements which were entirely to their advantage. The first was the treaty signed between the Porte and Great Britain in 1838, to be followed by others, including France. To conduct its reforms, the Porte borrowed from Europe and it was in this context of a virtually new country that capital flooded into the Levant. However, these loans were granted to the Porte under draconian conditions and their usurious interest rates were ruinous for the Ottoman State. These loans, as well as the concessions granted to Europeans (various monopolies, leasing of State revenues etc.) favoured the establishment of a banking system in Turkey. The Ottoman Bank, 50% of whose capital was French in 1856, became the Imperial Ottoman Bank in 1863, which was both a private and an Ottoman State institution. Subsequently, local banks appeared, with mixtures of regional and European capital. They were often ephemeral and called “Galata Bankers”. The European powers, especially Britain and France, established their banking subsidiaries in the Ottoman Empire. The question of the negotiation of bills of exchange had thus been solved for the French merchants. However, the system of Ottoman loans was disastrous for the Porte. The investments concerned only education, the administration and the army, and little if at all its infrastructures, with each loan being used in great part to pay off the previous one, until the Ottoman State went bankrupt in 1875-1876.  This allowed the main European powers to take control of the Porte’s finances as well as 25% to 30% of the Empire’s revenues.