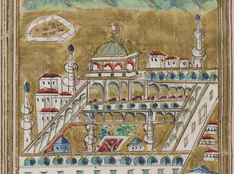 Thanks to the 19th-century contacts and confrontations between the states of Europe and the Near East, publications concerning Islam took off, produced by those who were then called Orientalists.

It might be said that the religious landscape of central Islam had not changed very much at the dawn of the modern era. This was to a large degree due to the interior stability of the empires, which had lasted since the 16th century, whether it be the Ottoman Turks, the Iranian Safavids or, more to the east, the Indian Moghuls. The Ottoman empire, the oldest of the three, had dominated the entire Levant, then Egypt after 1516-1517. Often engaged in external conflicts, it had at the same time managed to conserve a remarkable religious plurality, even though Islam of course remained the official religion. A large number of the Jews, who had been expelled from Spain by the 1492 decree, had found refuge in Ottoman lands. As for the various religious strains within Islam itself, including legal, theological and mystical elements, which had been born during the first five or six centuries of Islam, often in a mood of conflict and polemics, they had become institutionalised within the imperial administration.

When it came to exchanges, the “Echelles du Levant”, in other words ports having significant commercial and legal privileges, had run relations with the Kingdom of France since 1536. The so-called Capitulation agreements, associated with ports, but also a few inland towns such as Aleppo, Damascus or Cairo, were denounced only as late as 1914 when, during the chaos of the First World War, the last Ottoman sultan allied himself with Germany, after being confronted by major territorial losses over the previous decades. French interventionism had begun in the early 19th century with Bonaparte’s expedition to Egypt (1798-1805). The British then took on the mantel during the second half of the century. Before this brutal clash with modernity, the eastern ports had welcomed all kinds of travellers. A typical example would be Antoine Joseph du Caurroy (1775-1853), who was the director of the Language School in Constantinople, where the future interpreters for the Kings of France were trained. These famous dragomans were often efficient intermediaries for the transmission of the manuscripts needed by the Orientalists who had remained in Europe, for example Silvestre de Sacy (1758 – 1838). A specialist in Arabic and Persian, he corresponded with Du Caurroy. It was by these same channels that there arrived in France the 9th and 10th century Koran leaves acquired by Jean-Louis Asselin de Cherville (1772-1822) who was a consular agent based in Egypt. Doctor Antoine Clot, or Clot Bey, (1796 –1868), who had founded a hospital in Cairo, also transmitted a large number of manuscripts.

Apart from these collectors of documents, there were also observers who left behind studies. Two main trends stand out. One of them extends the questions that 18th-century authors had about the lands of the Orient. For example, Jules Barthélemy Saint-Hilaire produced in 1865 a Mahomet et le Coran with an introduction about the mutual duties of philosophy and religion. Pacifique-Henry Delaporte did likewise in 1874, with his Vie de Mahomet. As for Kasimirski, a Polish dragoman, originally from Hungary, in 1840 he produced what is considered to be the first modern translation of the Quran. The other trend consisted in not studying institutional Islam, but rather its minority strains. For example, in 1818 Jean-Baptiste Rousseau published his Mémoire sur les trois plus fameuses sectes du musulmanisme, les Wahabis, les Nosairis et les Isamelis. While the second and third of these two movements, the Nusayris (currently the Alawis) and the Ismailites, above all established in Syria, go back to the medieval period, Wahhabism is a more recent arrival. It was born in the mid-18th century in Eastern Arabia. But this movement, which immediately attracted attention because of its radicalness, was temporarily repressed at the start of the 19th century by the Khedive of Egypt, on the request of the Ottomans. Another point of interest for many authors were the Druze, who had long been present in the coastal mountains of the Levant, given that their origin goes back to the 10th century. Jean-Michel de Venture de Paradis (1739-1799) wrote a Mémoire pour servir à l'histoire de Druses, peuple du Liban. As for the diplomat Eugène Poujade (1815-1845), he took an interest in the secret texts of the Druze, in the first volume of his work, La Syrie et le Liban.

When it comes to the productions of indigenous authors, it was necessary to wait for the end of the 19th century to see a real break from the past. Given the growing influence, and even the control of European states over the lands of the Near East, a reaction which was at once ideological and religious arose during the second half of the 19th century. This was to drive forward the current of Pan-Islamism, organised around such wandering figures as the Iranian Jamāl al-Dīn al-Afghānī (1838-1897). In particular, he was in Egypt from 1871 to 1879. There, he influenced some of the doctors at Al-Azhar University, such as Muhammad Abduh (1849 -1905). There can be no doubt that the current religious radicalisms, nourished by the recent wars that have shaken the Islamic countries of the Near East, which became independent in the mid 20th century, do not derive their arguments from the early historical Islam of the 7th century, but instead from the late 19th-century religious ideologies which invented Salafism as a return to an ideal, foundational past.