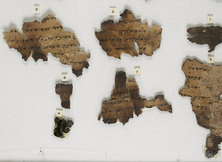 This discovery, which was considered to be the most important archaeological find in the 20th century, continues to question the foundations of Judaism and Christianity, which are now more than ever conjoined by this mysterious library, buried in the desert.

History tells how, one fine spring day in 1947, a young Bedouin goatherd looking for one of his lost charges discovered some terra cotta pots in a cave, full of scrolls covered with ancient writings. Was it really an animal being chased by Bedouins? Did they know about the existence of this hidden scrolls? Were they really in pots? What was inside them? Who did they belong to? Who wrote them, or copied them? … All of these questions are part of the extraordinary saga of the discovery of the Dead Sea Scrolls, a saga raising multiple issues, which for almost sixty years has created debates and posed questions which are constantly being renewed as the research progresses. For, this discovery, considered to be the most important archaeological find of the 20th century, continues to question the foundations of Judaism and Christianity, which are now more than ever conjoined by this mysterious library, buried in the desert.

Before long, the Bedouins sought to profit from their finds. They showed them to two merchants from the Church of Syria, who in turn showed them to the Superior of the Monastery of Saint Mark in Jerusalem, the Metropolitan Mar Athanase Samuel. Meanwhile, via another intermediary, other manuscripts discovered by the Bedouins came to Professor Eleazar Sukenik of the Hebrew University of Jerusalem, who, at once convinced of the importance of this discovery, sought to acquire all the scrolls that had been found, in particular those in the possession of Metropolitan Mar Samuel. He, however, thinking that he could benefit more from selling them abroad, decided to keep the scrolls and try his luck in the USA. But, having failed to sell them, he published an advertisement in a newspaper in 1954.  It was then that the son of Sukenik (who died in 1953), Yigael Yadin, bought them under an assumed name so as to not raise suspicions. It was only two years after the initial discoveries, in 1949, that the director of the École Biblique et Archéologique de Jérusalem, Father Roland de Vaux, as well as Gerald Lankaster Harding, the director of the Department of Antiquities in Jordan, were informed of the discovery by an American publication. They immediately organised some excavations, and a real manuscript chase started up. The archaeologists of the French, British and American schools in Jerusalem struck up a genuine competition against the Bedouins in the hills of the site. This race also started up on the market of antiquities with, as a backdrop, the tensions associated with the creation of the state of Israel.

Between 1947 and 1955, among the hundred or so caves that were examined, eleven revealed their secrets, bringing to light some 900 manuscripts, in the form of hundreds of thousands of fragments. This figure no doubt represents just a tiny part of what was originally there. For, over the centuries, many of them must been destroyed by the climate, while others were found, stolen, then scattered. At the beginning of the 2nd century, the great Biblical scholar Origen claimed to have found an unknown version of the Psalms in a pot. In the 12th century, it was Timothy, a patriarch of Bagdad, who told how an Arab hunter came across a cave full of books, while looking for his dog. So it was that such caches of manuscripts had regularly been found. Furthermore, other caves near the eleven in question contained broken pots and fabrics, suggesting that they too probably contained scrolls.

These writings all belong to the Jewish religious literature from before the destruction of the Temple of Jerusalem (70 CE). No other type of writing (administrative, commercial, correspondence or a private archive...) has been found, except a strange copper roll, whose real meaning remains elusive. The first decipherers initially separated the manuscripts into categories, “Biblical” and “non-Biblical”. But as the decipherment continued, the proportion of Biblical manuscripts, in other words texts identified as belonging to the canonical Hebrew and Christian Bibles (the Old Testament), dropped (to about 25 % overall) compared to the mass of religious texts which are not part of the Bible, are termed “apocryphal”, meaning “hidden”, and are not included in the Bible’s canon. All the same, most of these texts can be associated with Biblical books, and provide different readings or versions of them. While they have disappeared from the official version, traces of them can be found in popular traditions. So it is that some of them have come down to us in Jewish or Christian medieval manuscripts. But some of them were completely unknown.