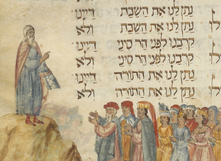 As a religion born in the Orient, Judaism has followed the course of world and Mediterranean history from antiquity to our times. Its encounter with Islam has been as rich as it has been eventful.

Anchored in the Orient, Judaism entered history in the second millennium BCE. According to Genesis, it was in the Nile valley that the Israelites became aware of their singularity. Freed from slavery by Moses, they crossed the Sinai towards the land of Canaan, the modern Palestine, the land promised by God to Abraham. They established themselves there and, after many tribulations, adopted a monarchy under the house of David, with a capital, Jerusalem and a Temple destined to become the symbol of their religious and political unity.

After becoming divided, they fell under the yoke of Assyria, and then of the Babylonian King Nebuchadnezzar who destroyed the Temple and deported a part of the population into Mesopotamia. As the new masters of the region, the Achaemenid Persians allowed them to return to Judaea in 540 BCE and rebuild the Temple. However, many Jews stayed on in Mesopotamia and Persia, as well as in Egypt and Syria.

Coveted both by Ptolemaic Egypt and Seleucid Syria, Judaea experienced a brief period of political independence under the Hasmoneans which reached its zenith under Herod the Great (37-4 BCE). After 43, the country became a protectorate of Rome. Ravaged by deep social and religious divisions, the population finally rebelled in 66. This insurrection was crushed, at a terrible cost of human life. Jerusalem was reduced to ashes and the Second Temple destroyed (70). The loss of its very name was the ultimate fate of Judaea, which has since been called Palestine.

After contact with the Hellenic and then Roman civilisations, Judaism experienced several major transformations: firstly, the arrival of a new religious elite of “scribes” ( soferim, sing. sofer) or rabbis, whose renown came from their erudition; subsequently, the appearance of the synagogue as a place of instruction and recruitment for this new elite; and finally the division of society into three main political and theological currents – to which would later be added Christianity – the Sadducees, or defenders of the established order, the Pharisees, who were rigorous adepts of a dynamic vision of Judaism, based on the written Torah as well as “oral law”, and the Essenes, established in Qumran, in the caves of the Dead Sea, who dreamed of a Jewish society purified from its stains, while preparing for Messianic times.

After the destruction of the Temple, and being confronted by the ferocious opposition of the Church, as of the 7th century the Jews gathered in Muslim lands, where they benefitted from the legal status of being “dhimmi” which, in accordance with the clauses of the Pact of Omar allowed them to practise their religion freely. As a result, after its encounter with Islam, and thanks to the Arabic language, Judaism became enriched with new frames of reference and new legal, philosophical and economic concepts, which were given a purely Jewish content. The intellectual effervescence in which the Karaites played a crucial role and which was to continue when, attacked from all sides, the Muslim world folded back onto itself after the 11th century, proceeded from a more rigorous application or discriminatory rules contained in the Pact of Omar.

In the 16th century, the arrival in the Ottoman empire and the Levant of thousands of Jews and Marranos expelled from Spain and Portugal, gave a new dynamic to Oriental Judaism. The contribution of Iberian Jews was particularly remarkable in Safed, Galilee, which became the greatest centre of Jewish mysticism in the world. This activity contributed to the explosion of the Messianic Sabbatai Zevi movement which, in the mid 17th century, spread like a line of gunpowder across all the western and eastern communities. Alerted by the agitations that this Messiah of Izmir inspired, the Turkish authorities demanded that he convert to Islam in February 1666. Several hundreds of his disciples did like him, by continuing to practise in secret certain Jewish rituals: the so-called Donmeh.

This dramatic event brought in its wake both discouragement and disenchantment. It left deep scars in communities that had long been declining, while the centre of gravity of the Jewish world inexorably shifted towards Western Europe.

Aware since Bonaparte’s expedition to Egypt in 1798 of the urgent need for reforms, the powers that be in the Ottoman Empire published in 1856 the edict of Gülhane proclaiming the equality between Mulims and non-Muslims. Legal emancipation and European interventionism, clearly tainted by ulterior imperialist motives, sharpened the tensions not only between Christian and Muslims,  but also between Jews and Christians. So it was that, during the Damascus Affair in 1840, the consul of France solidly supported the Syrian Catholics who had accused the Jews of having murdered one of their priests. This form of accusation of ritual murder was to be reproduced over the following years, in all the cities of the Ottoman domains with a large Christian population, despite the frequent denunciations of the Muslim authorities.

Taking such events as a pretext, as well as the generally terrible situation of Jews in the Levant, the Alliance Israélite Universelle, founded in 1860 in Paris, decided to provide its support by helping them become French, and facilitating their inclusion in world society. For this reason, it opened in Syria, Turkey, Egypt, Iraq and Palestine schools of general and professional instruction, with the vocation of playing a major role in the education of new Jewish elites in Muslim countries.

Never standing at over 3% of the overall population - except in Palestine – the Jews of the Levant experienced a rapid demographic growth between the two world wars, thanks to the gradual improvement of sanitary conditions and the drop in the rate of child mortality, but also immigration, coming from the Maghreb, Syria, Italy and Greece, towards Egypt whose population rose from 5,000 in 1800 to 65,000 in 1947. This immigration came above all from the countries of Central and Eastern Europe, towards Palestine where the number of Jews progressed from 85,000 in 1914 to 136,000 in 1925, then to about 600,000 in 1946. Remaining minor until the end of the 18th century, the Jewish population of Iraq also increased considerably throughout the 19th century, thanks to migrations coming from Kurdistan, Persia and Aden. It was also from these countries, as well as Afghanistan, that the first Jewish migrations left for northern India and China, after 1830.

In political terms, the First World War led to a deterioration of the relations between Jews and Muslim because of the rise of nationalisms and the intensification of Zionist immigration to Palestine after the Balfour Declaration in 1917. This situation could also be felt in Iraq, where the Jews had nevertheless shown a genuine desire for integration into Arab society and culture, backed up by the myth cunningly kept up by King Faisal (who died in 1933) of a multi-confessional Iraqi state. Seriously undermined by the massacre of the Assyrians in 1933, this myth, now an inaccessible dream, was to be finally buried after the slaughter of the Jews of Bagdad, in June 1941, by the Iraqi army, as it fled before the troops of General Wavell.

At this time, the Palestinian question was reaching one of its decisive points: the creation of the state of Israel and the beginning of the Israeli-Arab wars which marked the end of a Jewish presence in Islamic territories.