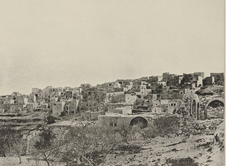 “Holy places” can be defined as sites where events in the history of salvation as told in the Bible took place. They are in part shared by the three monotheisms.

“Holy places” can be defined as sites where events in the history of salvation as told in the Bible took place. They are in part shared by the three monotheisms. For the Jews, it is the Biblical history of the people of Israel that determines this geography. For the Christians, these places are above all attached to the passage of Christ in the world, in Palestine. Lebanon and Jordan can also claim to have witnessed an episode in the gospels, while a short paragraph in Saint Matthew, subsequently amplified by apocryphal gospels, makes Egypt a holy place, consecrated by the passage of the Holy Family. Mataree, to the north of Cairo, is the most prominent of the 55 Egyptian sites that are currently reputed to have welcomed Jesus and his parents.

But pilgrims in the Holy Land also encountered on their itinerary traces of the saints of the Old and New Testaments, such as Elijah on Mount Carmel or Paul in Damascus, or else the heroes of early Christianity (Saint Jerome in Bethlehem, or Saint Antony in the desert of Egypt). Furthermore, as can be seen in the Journal of Thomas Roux (1913) the journey and its stopovers (Malta, Alexandria, Constantinople…) and the hazards of navigation often take up more space in tales of pilgrimage than visits to holy places themselves.

It was only after Christianity had been made official by the Roman Empire (4th century) that the practice of gathering and praying on the Mount of Olives or in the grotto of Bethlehem became attested. The sites in the gospels were then identified thanks to local traditions, or else “invented”, sometimes thanks to miraculous inspiration. Some of them, such as Mount Sion, progressively brought together several episodes (the Last Supper, the appearance of the resurrected Christ, Pentecost, the Dormition of the Mother of God). The sites of the Old Testament were also introduced into this sacred topography, with a will to dispossess them from Jewish and pagan traditions. Excavations brought to light the tomb of Christ, near which Constantine had a complex built (326 – 335), on the site of the current Church of the Holy Sepulchre. The Church of the Nativity in Bethlehem, built at the same time, and restored under Justinian (527 – 565), still retains its original Byzantine form.

The conquest of Palestine by the Arabs did not put an end to these pilgrimages and did not change radically the Christian topography of Jerusalem. It added to its Christian and Jewish sacredness that of Islam, with the construction of the Dome of the Rock on the esplanade of the Temple by the Umayyads (late 7th century), and placed Christian pilgrims under Muslim authority. Cairo and Damascus then became important gathering places for the annual caravan of the Hajj towards the holy places of Arabia.

By putting an end to an exclusively Byzantine control, Muslim sovereigns opened up the access to these holy sites for other forms of Christianity. The Abbasid Caliph Harun al-Rashid allowed Charlemagne to establish hospices for the Franks there. More and more western pilgrims arrived, despite the destruction of the Holy Sepulchre by the Fatimid Caliph Al-Hakim in 1009. The spiritual renewal of the 11th century put believers on the road for their final journey, in the hope of awaiting the imminent Parousia in the earthly Jerusalem. Subsequently, devotion to Christ’s humanity created the desire to walk in his footsteps, and to suffer with him. The conquest of Jerusalem by the Seljuqs over the Fatimids in 1071, which had consequences for the safety of the sacred itinerary, was doubtlessly one of the causes of the First Crusade. Urban II militarised pilgrimage, making the crusader an armed pilgrim. After the Franks had taken Jerusalem in 1099, the Latins became the masters of the Holy Places. There then arose a well-established ritual for visiting them. But, as of the end of the 12th century, the Latin ardour for pilgrimages started to wane. The city was taken back by Saladin in 1187, and the last Frankish footholds were obliterated by the Mamluks in 1291.

For western pilgrims, visiting Palestine did not just mean discovering Muslims and Jews: it was also often their first contact with the various Eastern Christianities. They were welcomed by the Franciscans, who in 1343 had become the Guardians of the Holy Land, and who were patiently reacquiring most of the holy places lost by the Franks, while having to accept the fact that they would have to share them with Eastern Christians, in particular Greeks and Armenians, in a climate of tension which was to worsen, and which has still not fully cooled even today. The Latins then considered the Easter festivities in the East as intolerable “superstitions”. What is more, the Gregorian reform of the calendar in 1582 introduced a difference in the dates of the celebrations of Easter between the West and the East. The restoration of buildings led to costly competitions between the Churches to obtain the sultans’ authorisation. After 1516, the Ottoman conquest favoured the ever-growing number of Eastern pilgrims, while the number of Latin visitors was extremely reduced. And yet, nostalgia for the Holy Places did not completely desert the western imagination. Guides and narratives of the Holy Land preserved its memory, and provided a spiritual pilgrimage as a compensation for a physical one.

However, Custody of the Holy Land still remained a solid institution, bringing together the alms of the entire Catholic world in favour of the Holy Land. This money was in great part spent in order to buy the favours of the Ottoman authorities, with the support of the Catholic powers, above all in France, whose protection of the Holy Places was part of the prerogatives obtained thanks to treaties with the Sublime Porte (Capitulations). The Greeks benefited from alms from the Orthodox world and the generosity of Byzantine emperors, Serb and Rumanian princes, and the Tsar.

It was then the industrial Europe of the 19th century that made the Holy Land sacred once more. The Greek War of Independence (1815 – 1830) and the occupation of Palestine by the Viceroy of Egypt Muhammad Ali (1830 – 1840) favoured the intervention of rival powers. Britain, encouraged by Protestant Millenarianism, arrived as a protector of the Jews, more and more of whom were moving to Palestine. An Anglo-Prussian Protestant Bishopric was set up in Jerusalem in 1842. Russia supported the return of the Greek Orthodox Patriarch to his town of residence in 1845, then the considerable real estate acquisitions that he made there. As a reaction, the Catholic Church re-established the Latin Patriarchy of Jerusalem, which had disappeared after the Crusades (1847). The conflict between France and Russia for the protection of the Holy Places was one of the causes of the Crimean War (1854). The establishment of Catholic and Protestant institutions multiplied in Palestine in the second half of the 19th century. Travel to the Holy Land, made easier by steamships and railways, greatly expanded, firstly among the Orthodox (mainly Russians), followed by the Catholics, with an annual French pilgrimage organised by the Assumptionists (starting in 1882). Around the same time, the scientific study of the Bible developed (founding of the École Biblique de Jérusalem, 1890), which brought to light a large archaeological heritage. The Mytilene Agreement (1901) confirmed by the Treaty of Constantinople (1913) determined the rights of pilgrims, as well as of the French and protected establishments in the Holy Land.

These texts, which remained in vigour on the founding of the state of Israel (1948), are still the basis of the status of Catholic institutions in Palestine today. Pilgrims and Christian institutions suffer from the consequences of the Israeli-Palestinian conflict, and complain of the harassment of the Israeli administration. The Vatican is favourable to the internationalisation of the Holy Places, but its concern to keep good relations with Jews and Israel, as well as its preoccupations about Palestinian Christians, have led it to remain rather discreet about this subject. The future of the Christian Holy Places does not seem to be a priority in the current international attempts to end the conflicts between Israel and its Arab neighbours.