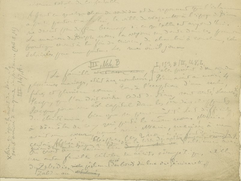 Ernest Renan and the Origins of Christianity
Domenico Paone, docteur of the EPHE, director of the Renan Group in ITEM (UMR 8132 CNRS / ENS)
Access to documents

Ernest Renan’s La Vie de Jésus was born during a journey to the Middle East. A study of its  manuscripts enlightens us about the circumstances of this genesis and this scholar’s working methods.

During his archaeological mission in Syria, Lebanon and Palestine from 1860 to 1861, Ernest Renan filled four black moleskin notebooks with annotations (Bibliothèque nationale, Papiers Renan, NAF 11483, 11484, 11485 and 11488). Made up of often brief fragments, these pencil-written notes set his thoughts down on paper, born from his experience of places – monuments or villages, natural or man-made landscapes – encountered during his trip.

The true nature of these notebooks, in which travel impressions are mingled with personal remarks and artistic or historical observations, emerges from a comparison with the manuscript of the first draft of La Vie de Jésus, (NAF 11448). On sheet 86 of this volume can be read, written in pencil and underlined, the word “Répertoire”. It is the beginning of a kind of skeleton scheme of the work, already divided into chapters, made up of brief paragraphs marked with alphanumeric codes, for example: “II, 148, K” or else “III, 144, B”. What is more, the notes in these books bear traces of the successive interventions of Renan so as to sort and organise them. Given that a single sheet often has several different notes, no doubt written at different times, Renan adopted a classification system that allowed him to identify each note unambiguously, by marking it with a Roman letter. Thus, the code “II, 148, K” refers to note K on sheet 148 of notebook II.

He had already used the same working method in his Notes d’Italie (NAF 11492 et NAF 11492bis), taken down during his research mission among the manuscripts of Italian libraries in 1849-50. As the young researcher had no notebooks at the time, he jotted down his thoughts on more varied media: loose sheets of all sizes, the backs of letter drafts or transcriptions of manuscripts, or else torn scraps of paper. In this case, these notes, classified using the same system, form the pre-text of a novel that remained unfinished (Patrice) but also certain parts of L’Avenir de la science and of his thesis on Averroès et l’averroïsme.

During a subsequent trip to Asia Minor from 1864 to 1865, when he visited Egypt, Lebanon, Syria, Turkey and Greece, Renan took more travel notes in two notebooks (NAF 11486et NAF 11487) with the same sorting method. The corresponding repertory has not been found, but these notes were apparently used as a “reservoir of ideas” during the drafting of Les Apôtres (1866) and Saint-Paul (1869), volumes II and III of his Histoire des origines du christianisme.

Thus, the first of the “Oriental notebooks” contain the genesis of La Vie de Jésus, one of the greatest bestsellers of the 19th century (an estimated 400,000 copies had been sold by 1947). Published by Michel Lévy Frères in 1863, the book gave its author sudden fame, but not without certain scandalous nuances: the negation of the supernatural and miracles, a philological reading of the gospels – interpreted as legends – and finally, and above all, the portrait of an historical Jesus, “an incomparable man” but not “divine”, which triggered a genuine counter-offensive from the Catholic Church, backed up by hundreds of brochures and volumes refuting the work of this “apostate”, which came out in France and abroad. It was at the same time that Renan became one of the flag-bearers of a science of religions practised according to the historical method, emancipated from the dogmas of religious orthodoxy.