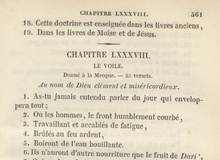 Kazimirski, the lexicographer and translator of the Quran in the 19th century, who has still not gone out of fashion.

Albin de Biberstein Kazimirski (1808-1887) is one of the few 19th-century authors whose works are still in common use today. Firstly, there is his Arabic-French dictionary, published in 1860, which remains precious for the study of Classical Arabic. The other work, which is accessible to a broader public, is his translation of the Quran. A strange story lies behind this translation. It was commissioned from Kazimirski by a sinologist, Jean-Pierre Pauthier, who had conceived a project of bringing together what he called the Sacred Books of the East: Confucius, Manu the Indian legislator, and the Quran.

Kazimirski, who was born in Poland, fled his country at the age of 23, after being involved in the 1830 political revolt. Having studied oriental languages, above all Arabic and Persian, first in Poland, then Berlin, he was recruited as an interpreter and attached to the “Echelles du Levant”. The new translation “requested”, as Jean-Pierre Pauthier put it, from this “young exile”, appeared in book form in 1840. The preface, signed by the publisher, drew up a panorama of this “new religion” and the life of its “founder”, according to the state of knowledge of European Orientalists at the time.

However, Jean-Pierre Pauthier also pointed out a fact of some importance. The translator, summoned to Persia to carry out his function as a dragoman, had not been able to revise his translation before publication. As soon as he returned to France, Kazimirski set about making a revised version, which appeared from the same publisher, Charpentier, in 1841. This was followed by further revisions. Those of 1844 and 1865 are preserved in the BnF, as is the 1840 edition.

Apparently, no comparison has ever been made between these different revisions. But, as we shall see, this would be of considerable interest. Kazimirski wrote the introductions for each of his revised translations. The point was to situate himself in terms of older translations, such as the one in Latin by the Italian Ludovico Maracci (1698) or the English version of Georges Sale (1734), which he judged to have been the best before his own translation. At the same time, he took care to distance himself from Claude-Etienne Savary who was his immediate predecessor (1783), when it came to French. As Jean-Pierre Pauthier had already pointed out, in his preface to the 1840 edition, this translation was an “unfaithful beauty”. Following the example of Jean-Pierre Pauthier, Kazimirski also provided a "notice biographique sur Mahomet" preceding his translation. As one republication followed another, the contents of this notice evolved. When Armand-Pierre Caussin de Perceval (1795-1871) published his Essai sur l'histoire des Arabes avant l'islamisme, pendant l'époque de Mahomet et jusqu'à la réduction de toutes les tribus sous la loi musulmane (1847-1848), it at once became Kazimirski’s reference work. The translation was republished several times in the 20th century, but without any of the notices written by Kazimirski, which preceded his translation in its 19th-century editions, and instead with modern prefaces, the best known being by Mohamed Arkoun (1928 -2010). It is also strange to observe that the translation as republished seems to be that of the 1840 edition, and not the version that Kazimirski revised himself the next year. To see this, it is enough the compare – as we recently noticed quite by chance – the versions of verse 19 of surah 87, in which oddly enough we find Jesus, instead of Abraham as in the Arabic text, and the revised 1841 translation.