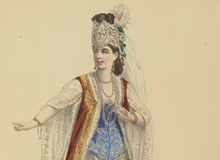 The Orient of Musicians
Pierre Larcher, emeritus professor of Arabic linguistics at the University of Aix-Marseille
Accéder aux documents

The Orient of musicians is no less vast than that of painters and writers, to which it is closely linked, and, of course, of scholars who, via writers, were often the first sources of inspiration. It could be near or far, ancient or modern. It is thus too vast for a real overview of it to be made here.

We shall limit ourselves here to the Mediterranean Orient on the one hand, and musicians who were French or linked to France, even for just one opus, between 1800 and 1945, on the other: this is generally accepted to be the golden age of orientalism, even if its roots actually lie in the far distant past.

If we stand back a little to take in the production of the period, what is immediately striking is the large number of works that were produced, and the very small number that are now remembered. Their intrinsic quality is sometimes blamed, but so must be changing fashions and tastes, aggravated by the highly ideological, somewhat masochistic criticism of all forms of “Orientalism”. Periodical exhumations are reminders that some of them have been unjustly forgotten. The second striking point is the recurrence of themes and characters, forming genuine chains down the centuries, with each era offering its own interpretation of them. In musical terms, however, it can be noted that the Orient’s musical traditions contributed little, even if note can be made of more or less effective pastiches, and some happy exceptions: such as the lamento in Bizet’s Djamileh (1872).

The Ancient Middle East was entirely dominated by two characters. One of them, a woman, is Semiramis, the subject of a large number of tragedies, operatic or otherwise, among which stands out that of Voltaire (1748), the original behind Rossini’s Semiramide (1823), his last Italian opera before he arrived in Paris, in 1824, where it was to be staged the following year. The other, a man, is Sardanapalus, whose death was described by Byron (1821), then painted by Delacroix (in 1827) (something like a pictorial manifesto for Romanticism!), before being the “subject” of a cantata for the Prix de Rome, won by Berlioz in 1830. In 1901, it was the turn of Myrrha, the favourite who had accompanied him in death, to be the subject of another cantata also for the Prix de Rome, this time won by Ravel, among others.

The same goes for the Biblical Orient, dominated by two antithetical figures. One is a major figure in the Old Testament: Moses, the subject of Rossini’s Mosè in Egitto (1818), which received a French adaptation in 1827, under the title Moïse en Egypte ou Le Passage de la Mer Rouge, but also of Félicien David’s oratorio Moïse au Sinaï (1846). The other is a minor figure in the New Testament. Simply designated as the daughter of Herodias in the Gospels, she gradually eclipsed her mother in later literature. It was still on the mother that Hérodias, one of Flaubert’s Three Tales (1877) was based, from which Massenet derived his Hérodiade (1881). But it was on the daughter, many times painted by Moreau since the 1870s, that Oscar Wilde based his Salomé, directly written in French, and the source not only of Richard Strauss’s Salomé (1905) (a French version exists), but also the opera by Mariotte (1908), which was itself preceded by one year by Florent Schmitt’s ballet La Tragédie de Salomé. This of course did not exclude the fact that other Biblical episodes might be evoked, as in Saint-Saëns’s opera Samson et Dalila (1877).

The Christian Middle East was illustrated by Massenet’s Thaïs (1894), adapted from the novel (1889) by Anatole France, which recounts the crossed destinies of Thaïs, an Egyptian courtesan who became a saint, and the Cenobite Paphnuce (Athanaël in the opera), who dooms himself while trying to save her.

Finally, the last arrival on the historical scene, Islam, burst into the Mediterranean world in the 7th century. At least one work, Vincent d’Indy’s opera Fervaal (1897), evokes the so-called “Sarasin” incursions into the south of Gaul during the High Middle Ages. But it was two other episodes in the conflictual relations between Islam and Christianity that most frequently acted as a setting: on the one hand, the crusades (11th to 13th centuries), on the other, commerce raiding (16th- early 19th centuries). The former were in particular evoked in Il crociato in Egitto (1824) by Giacomo Meyerbeer, the last opera he created in Italy, and whose triumph took him to Paris, in the steps of Rossini, in 1825, where he stayed. It was a Meyerbeer-style “grand opera” that Verdi staged in Paris with Jérusalem (1847), the French adaptation of his opera I Lombardi alla prima crociata (1843).

However, as of the second half of the 17th century, under the incontestable effect of humanism, Islam became an object of intellectual curiosity. Interest was taken in its various productions. One of them, thanks to Antoine Galland, was to have a considerable destiny: The Thousand and One Nights.

In a lighter vein, mention can be made of Boieldieu’s Le Calife de Bagdad (1800), inspired by Haroun al-Rashid (Isaoun in the opera), which the Nights depict as wandering around incognito in his capital at night. In an even lighter vein, one of the most famous tales in Galland’s version, but which did not belong to the Arabic corpus of the Nights, Aladdin of the Wonderful Lamp, inspired the librettists Hector Crémieux and Adolphe d’Ennery with a “féérie nouvelle” (1863), which we would now call a musical comedy, it being a play intercut with dances and songs. Crémieux, still known for being the librettist of Offenbach’s Orphée aux enfers, is also responsible, along with Adolphe Jaime, for an opera-bouffe, Les Turcs, with music by Hervé.

More seriously, another famous tale in Galland’s version, but not part of the Arabic corpus of the Nights either, the Story of Prince Ahmed and the Fairy Paribanou, lies at the origin of the vogue for the Peri, leading to two ballets: La Péri (1843), on a libretto by Théophile Gautier, by the German composer Friedrich Burgmüller, who was living in Paris; and La Péri ou la fleur d’immortalité (1912) by Paul Dukas. At the end of the 19th century, Galland’s version ran up against competition from that of Mardrus, the source of Henri Rabaud’s Mârouf, savetier du Caire (1914).

The Nights have also given to the world of letters and art the character of the narrator, Scheherazade. She inspired Ravel with a féérie ouverture (1898) for an opera that was never to see the light of day, before being adopted as the title of three poems by Tristan Klingsor (1921): Asie, La Flûte enchantée, and L’Indifférent.

Many other themes, characters and genres took part in this Orient of musicians. Many of them were inspired by Egypt, which in French Orientalism benefitted from a particular status, as the direct consequence of Bonaparte’s expedition (1798), evoked for example in the opera-melodrama La Bataille des Pyramides ou Zanoubé et Floricourt (1803), whose composer and librettist cannot be identified with any certainty!): the Almées, “educated” female singers of poetry, who appeared in this opera were later the subject of several piano pieces, sometimes with a sung text; then there was Le Désert (1845), a symphonic ode by David, who has already been referred to, and a Saint Simonian who had stayed in Egypt; or else, the cantata Les Plages du Nil (1846), from the Halévy brothers, who also had Saint Simonian sympathies, with Fromental for the music and Léon for the lyrics, with, as an additional curiosity, an Arabic translation by Alix Desgranges; or else Saint-Saëns’s Piano Concerto N° 5 (1895), known as “Egyptian”, because it was composed in Egypt, and thanks to its (subtly) “Orientalising” 2nd movement. We also owe two pieces of military music to this same Saint-Saëns, Orient et Occident (1884) and Sur les bords du Nil (1908), the latter dedicated to the Khedive.

There can be no doubt that this site and the digitization of some of the elements of its very rich heritage will help to prevent it falling into obscurity.

Oriental studies
The Volkoff Album: panorama of the public and private architecture of Cairo during the first half of the 20th century