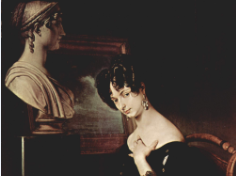 An important figure in the first phase of the “Risorgimento”, Princess Belgiojoso, author and philosopher, was forced into exile in the Ottoman Empire because of her support for the “Carbonari”. Once there, she drew up a sensitive, striking portrait of the Turks’ everyday lives.

While male travellers to the Orient are legion, the female travellers who visited these regions by taste in the 19th century remained more discreet. The Italian Princess Cristina Trivulzio di Belgiojoso (1808-1871) was a pioneer out of obligation. Her departure for the Orient was not due to passion but political banishment. The two works that were inspired by her exile, written in French, Emina. Récits turco-asiatiques (1856) and Asie mineure et Syrie. Souvenirs de voyages (1858), are all the more original thanks to this fact.

Sure enough, reports made by female voyagers to the Orient are relatively rare compared to their male counterparts. In this section devoted to the Orient of writers, it would be a pity to overlook Turkish Letters (1763) by Mary Wortley Montagu, the pioneer of variolisation; Suzanne Voilquin’s Souvenirs d’une fille du peuple ou La Saint-Simonienne en Égypte (1866); La Perse, la Chaldée et la Susiane (1887) and À Suse. Journal des fouilles (1888), by the archaeologist Jane Dieulafoy whose historical novel Parysatis (1890), set in the court of the Achaemenids, was set to music by Saint-Saëns on the author’s libretto; or else Les Pays Lumineux. Voyage en Orient (1879) by Louise Colet, who was not just the companion of Flaubert.

Born in Milan, at the time the capital of Napoleonic Italy, in an old aristocratic family, Maria Cristina Beatrice Teresa Barbara Leopolda Clotilde Melchiora Camilla Giulia Margherita Laura Trivulzio was not predestined to an adventurous life. But that is precisely what she had. In 1824, after losing her father, this rich heiress married Prince Emilio Barbiano di Belgiojoso. They separated a few years later. It was through her drawing  teacher, Ernesta Legnani-Bisi, a partisan of Italian independence and close to the “Società delle Giardiniere”, which brought together women committed to Carbonarism, that Cristina joined the conspirators’ movement, causing a scandal among the Milanese elite, whom she fled by going to Paris, where she frequented Franz Liszt, Heinrich Heine, George Sand, Alfred de Musset, and Augustin Thierry with whom she had a close friendship. Balzac, in the study he made of La Chartreuse de Parme in 1840, affirmed that Princess Belgiojoso had inspired the character of La Sanseverina, which Stendhal formally denied. In his Soirées du Stendhal Club, in 1905, Casimir Stryienski told of “the devastating split between Musset and Princesse Belgiojoso”, which the poet immortalised in a sketch, exaggerating her thinness, and in a ferocious poem, Sur une morte, in which he dwelt on her extreme paleness, which led her to be nicknamed “the green woman” in society and which, still according to Stryienski, inspired the wit of a peasant: “She’s so lazy that she can’t even be bothered to get herself buried!”. Envy also inspired a masterpiece of nastiness from Daniel Stern (the pseudonym of Marie d’Agoult, Lizst’s companion), in 1880 in her Souvenirs: “Never has a woman exercised the art of the effect to the same degree as Princesse Belgiojoso. She has sought it, and found it in everything; today in a negro and in theology; tomorrow in an Arab whom she had laid in her carriage to astonish the strollers in the Bois; yesterday in plots, in exile, in the eggshells of the omelette that she turned over herself on her fire, on the day when she saw fit to appear ruined. Pale, thin, bony, with blazing eyes, she played on the effects of a spectre or a ghost. She willingly accredited certain rumours which, for greater effect, put into her hand the cup or the dagger of Italian treasons at the Court of the Borgia.”

And yet nothing was less futile or further away from effect than the life of this passionaria. After having published, in 1842, an Essai sur la formation du dogme catholique, and translated in 1844 Giambattista Vico’s Scienza Nuova, from September 1848 to January 1849 she gave a long serial to the Revue des deux mondes, concerning “L’Italie et la révolution italienne de 1848”. Once back in Lombardy, after visiting Louis Napoleon Bonaparte in England, under the influence of Fourierism, Cristina Belgiojoso transformed her palace into a phalanstery. In Naples, at the moment of the Five Days of Milan which expelled the Austrians, she returned to her native city with two hundred Neapolitans, whose journey she financed. The return of the Austrians made her flee to Rome. In the first line of the instauration of the Roman Republic in 1849, the liberals entrusted her with the task of organising hospitals. Once this revolt had also been quashed, with the help of France, despite the promises of the future Napoleon III, Cristina was forced to take ship for Malta, with a scattering of companions in adversity. Her flight then led her to Anatolia, to Çakmakoğlu near Ankara, where she set up a farm with other exiles and her daughter Maria, born in 1838 of an unknown father. She lived in Turkey until 1855, when the Austrian authorities allowed her to return to her house in Locate. During the five years she spent in Asia Minor, the Princess drafted her memoires and wrote several mostly autobiographical texts, which she once again sent to the Revue des deux mondes, where they appeared under the name Christine Trivulce de Belgiojoso, before being brought together in book form: “La vie intime et la vie nomade en Orient” (February-September 1855) and “Récits turco-asiatiques” (March-September 1856, November-December 1857 and April 1858). These “scenes of Turkish life” stand out from all the male accounts of travels in the Orient. Firstly because Cristina, even if she did frequently leave her property to explore the region, was not a traveller in the same sense as other Westerners looking for local colour: having set up home in Turkey, she worked there and, as opposed to Lamartine who failed in his agricultural projects in Tire, she stayed there. Secondly, and above all, thanks to her twofold quality of resident and woman, she gained access to interiors and households, where she gathered the confidences and observations that can be found in her narratives, which have no equivalent in Romantic literature. However, her name is rarely mentioned in literary history. The political world showed her the same ingratitude. Cristina Belgiojoso died in 1871, ten years after the unification of Italy: none of the members of the government, which owed its existence to her struggles, attended her funeral.