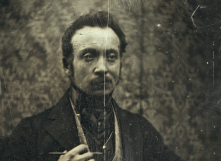 As an artist, scholar and early daguerreotypist, Joseph-Philibert Girault de Prangey became renowned as a pioneer of photography a century and a half after his journey to the Middle East.

In the spring of 1842, Joseph-Philibert Girault de Prangey (1804-1892), a rich scholar and artist, enthused by Arabic-Islamic archaeology and architecture, after devoting two works to Moorish and Arab sites in Spain and Sicily, set off to the Orient equipped with a daguerreotype. Before him, in October 1839, Horace Vernet, Frédéric Goupil-Fesquet and Joly de Lotbinière had also been there, but none of their daguerreotypes has come down to us. Just like Gérard de Nerval, who left for the Orient with same equipment, he returned to Marseille in December 1843, without having benefited from this technology. He even wrote to his father to explain how he preferred the drawings of his artist friends to daguerreotypes.

While Girault de Prangey shared this viewpoint, he had nonetheless made the necessary effort to train himself in its use, which required real knowhow, especially when travelling. The more than 800 daguerreotypes that he brought back from his journey (unique, unreproducible, extremely fragile plates) stand as exceptional visual documents, especially given the fact that they allow us to discover sites that have since been transformed, or even destroyed.

After a stay in Rome, at the Villa Médicis, Girault de Prangey went to Greece, then Cairo and Alexandria. After that he visited Constantinople and the archaeological sites of Asia Minor, while “keeping as far as possible away from the beaten track”. He continued his trip, which was to last three years, by going to the Holy Land, Baalbek, Damascus and Aleppo.

For Girault de Prangey, the daguerreotype was just a tool in the service of drawing, and precious because it provided exact reproductions of monuments and architectural details. He carefully filed way his countless shots, writing on their backs the dates and places where they had been taken, but he never thought about exhibiting them. In the same way, when he published Monuments arabes d’Égypte, de Syrie et d’Asie Mineure, then Monuments et paysages de l’Orient, he made no mention of the fact that his lithographs had been produced based on his photos.

In 1846, his writings led to him being elected as a member and correspondent of the Royal Institute of British Architect. However, the commercial and editorial failure of his last two books, which were expensive and published at his own expense, put a stop to his long-distance travels and work on architecture. He withdrew to his property of Les Tuaires, in the Haute-Marne, while continuing to produce daguerreotypes until the 1850s, as can be seen in shots taken in Switzerland and in his splendid Oriental-style house. He devoted the rest of his life to growing exotic flowers and fruit in his greenhouse, having no problem about coming over as an eccentric and taciturn misanthropist.

About three decades after his death, the Comte Charles de Simony acquired this abandoned villa and discovered in a lumber room some boxes containing the daguerreotypes of its former owner. Ironically enough, over a hundred and fifty years after his travels in the Mediterranean and the Middle East, Girault de Prangey, who saw drawing as the real summit of his art, became renowned as a pioneer of photography. Over the past fifteen years there have been constant publications, exhibitions and auctions (sometimes with record sales). His precise but also daring framing is admirable, as well as his pared-back shots, composed with power and simplicity.