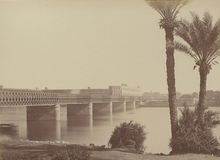 Emile Bechard
The new Cairo in 1874
Mercedes Volait, doctor of history and research director at the CNRS (InVisu laboratory of the Institut National d'Histoire de l'Art)
Access to the document

In 1874, the photographer Émile Béchard provided a detailed panorama of the first buildings in the new quarter which the Khedive Ismail had started to create in Cairo, modelled on new Parisian housing developments.

Working in Egypt from 1870 to 1880, the photographer Émile Béchard (1844- ?) is above all known for his genre scenes and cunningly composed Egyptian views, as well as his carefully constructed versions of Egypt’s cultural heritage, ancient or medieval, which his brother Hippolyte sold from La Grande Combe in the Gard. Béchard also produced work of a more documentary nature, including the collection illustrating the first collections of Egyptology that were brought together in the  Bulaq museum, which he made for Auguste Mariette in 1872, along with his associate Hippolyte Délié. His photographs of new Cairo belong to the latter trend. Brought together in 1874 in an album, of which just a few rare copies still exist, they provide a detailed panorama of the first buildings in the new quarter which the Khedive Ismail had started to establish on the western rim of Cairo’s historic neighbourhoods, modelled on new Parisian housing developments.

This operation started in 1868, with the levelling of former orchards so as to make room for the plots to be constructed. La Société des Eaux du Caire, under the direction of Baron Delort de Gléon, was responsible for the road works. A former pond, which was dried out, was transformed into a hilly park by the French landscape gardener, Jean-Pierre Barrillet Deschamps, with rocks (f. 56), a bandstand, a lake, a restaurant and gas lighting provided by lamps shaped like tulip trees (f. 48). It was called the Garden of Azbakiyya (Ezbekieh in older sources). Beside it was an Opera House, which was completed in 1871 (f. 36), as well as a “French Theatre” and a circus for equestrian shows. A hippodrome was opened in the heart of the neighbourhood (f. 14 and 24). Long, leafy streets forming a grid led to circular public places, and plots ready for houses surrounded by gardens. The land plots were given freely to anyone who agreed to build rapidly good-quality housing. Dignitaries of the Egyptian court, high-ranking European civil servants and bankers were among the first owners of these concessions. Several of them appeared in the album, including that of Serif Pasha (f. 21-22), Ismail’s minster of foreign affairs, or else that of Delort de Gléon himself (f. 30-34). These photographs allow us to discover the agrarian environment in which this quarter was established. It was called Ismailia, in homage to the Egyptian sovereign, Khedive Ismail. The Egyptian capital’s centre of gravity gradually moved in that direction. The quarter then became known as Wast al-balad (literally “the middle of the city”).

Béchard also recorded the large-scale public constructions being made at the same time, such as the Abdeen Palace, where the sovereign set up his court (f. 17-18), or the so-called “École des Filles nobles” (f. 15-16), for the education of the princesses of the Khedive’s family. He depicted the bridges that were built to connect Cairo to Gezira Island (f. 4-7), and then to the Nile’s left bank (f. 8-10), or else to cross the fresh-water canal that was dug in 1865 in order to supply the building site of the Suez Canal. The album also provides a view of the destructions resulting from the openings that were cut into the older parts of the town (f. 42-43). The one covering 2km from the gardens of Azbakeya to the Citadel to the south of the city led to the demolition of 398 buildings, including a mosque, and the reduction of the constructions that obstructed the pathway.

Béchard’s album is an extraordinarily unique visual and also documentary source for the genesis of modern Cairo. It stands as the photographic counterpart of the map made by the civil engineer Pierre Grand that same year, at a 1/4000th scale. Taken together, these two exceptional documents allow us to obtain an extremely accurate idea of the process of the native transformation of a great Middle-Eastern capital, before its colonial occupation by the British in 1882.