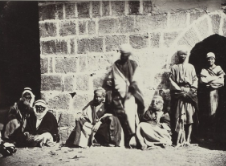 Albert Goupil (1840-1884)
Sylvie Aubenas, director of the department of Stamps and Photography, BnF
Access to document

These documents are the work of a mediocre amateur who barely mastered the techniques of photography, but was unconcerned by this, given that they were reserved for private use, with no intention of publishing or exhibiting them.

Albert Goupil was the youngest son of the great merchant of stamps, painting and photographic reproductions of canvasses Adolphe Goupil (1806-1893). He was associated with the direction of Goupil & Cie from 1872 to his early death in 1884. Despite his high rank in the company, in 1884 he effectively became the underling of Boussod, Valadon & Cie, which succeeded Goupil & Cie, where he no longer had any specific function. But the family fortune allowed him to indulge his taste for art collections. A first journey to Italy in 1858, in the company of the painter Charles François Jalabert, marked the beginning of his collection of Renaissance works. But it was his second journey in 1868, with his brother-in-law Jean Léon Gérôme, who had married his sister Marie in 1863, that gave him a taste for Middle-Eastern art objects, which were still relatively unappreciated by the great European collectors at the time.

This trip to the Orient, Gérôme’s third, brought together seven painters and Albert Goupil, who played the role of their photographer. Their five-month itinerary, which took them from Alexandria to Beirut, via the Sinai, Petra, Jerusalem, the Dead Sea and Damascus, is very well recorded. We have Gérôme’s notes, Famars Testas’ travel diary, Paul Lenoir’s book and numerous studies and sketches made on the way. The photographs taken by Albert Goupil were mentioned by his travelling companions, but it was only in 1996 that an album made up of seventy-nine shots was acquired by the Department of Stamps and Photography of the BnF. It is inscribed to one of the painters, Ernest Journault. It seems probable that Goupil gave a similar album to each of the members of the expedition, and a more complete volume to his brother-in-law Gérôme.

These documents are the work of a pitiful amateur who barely mastered the techniques of photography, but was unconcerned by this, given that they were reserved for private use, with no intention of publishing or exhibiting them. The streaks and lines that appear on many of the shots attest to the difficulties Goupil encountered in the use of glass collodion plates. In others, the tones are too dark, with looming skies because of the high luminosity. Groups are poorly framed, often taken from too far away. However, despite all the possible technical criticisms of this corpus of images, they still remain a precious record. Intimate and candid, such photographs are rare. They show an Orient as seen by a group of artists with no attempt at the facilely picturesque, with no concern for an archaeological examination or a scholarly compilation. This freshness, heightened by the clumsiness of certain shots, can be seen in the prints. Some of them teach us a lot about the painters’ travels and their use of photography. For example, on 15th February in Cairo, Famars Testas brought in a young model, Fatma, for himself, Goupil and Journault (the others having gone out on an excursion): “We made a study, and Goupil took a photograph”. What can above all be found in this album are landscapes, the Sinai, Saint Catherine’s Monastery, Petra, the travellers’ Arab escort, groups, the travellers’ camps, the Dead Sea, all of which precisely match the watercolours and drawings amassed by Bonnat and Gérôme. Goupil’s view of Madinet el-Fayoum was later used by Gérôme for a painting produced in Paris in 1870: Fellah Women Drawing Water. Gérôme, who clearly possessed this photograph, borrowed its entire setting and background: the houses, group of palms and other trees, and turned it into a genre scene by adding women beside the water.

On returning to Paris, Albert Goupil started to organise a collection of Oriental objects in his flat at 9 rue Chaptal, not far from the studio of his brother-in-law Gérôme, who lived on rue de Bruxelles in the New Athens quarter. As a member of the direction committee of the Musée des Arts Décoratifs, in 1880 Goupil took part in reorganising the Oriental Room. Until his death, he encouraged exhibitions allowing the public to become familiar with the arts of the Middle East.

Image caption : Journey to Egypt, in the Sinai, Jordan and Palestine. A. Goupil, 1868.