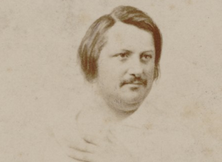 Honore de Balzac (1799-1850)
Andrea Del Lungo,professor of French literature at the University of Lille 3, member of the Institut Universitaire
Access the documents

La Comédie humaine “will be like a Western Thousand and One Nights”: thus did Balzac announce his work in his famous letter to Madame Hanska in October 1834, which for the first time described its overall plan. This comparison reveals the influence of the oriental tale, with its charge of sensuality and philosophical scope, on Balzac’s writing, while at the same time announcing the immense, plural nature of the work, which aimed at a full description of mankind and society. A few years later, the parallel with the Thousand and One Nights was also used to affirm the complexity of the modern social state, the material for Balzac’s writing, in comparison with the society described in oriental tales, in which “women are locked up in walled houses”, (preface to Une fille d’Ève, 1839). Such comparisons thus reveal a subterranean dialectic between civilisations, opening up a space in Balzac’s depictions, which were apparently limited to contemporary France.

During his life, Balzac never left Europe, even if the countries of the East –Russia and Ukraine, where he travelled to join his diletta Madame Hanska – stood for him as a “meeting point between Europe and Asia” (La Cousine Bette); and evocations of the Orient are rare in La Comédie humaine. The failure of a cycle of oriental stories, planned as part of the “Scenes of Military Life” under the title Les Français en Égypte, and never written, shows in the words of Guy Barthèlemy that: “it was not so much the Orient that interested Balzac than the perspective it gave on the West”, (Dictionnaire des orientalistes de langue française). More specifically, its evocation had the vital function of revealing the vices of western civilisation of which La Comédie humaine announced – and denounced – the decline.

The major example is La Peau de Chagrin (or “Skin of Sorrow”) an oriental talisman, whose magical power resisted the rational explanations of a dominant positivism. The novel’s hero, Raphaël de Valentin, acquires it after losing his last penny in a gaming house, and deciding to drown himself in the Seine. While he wanders through the town, his destiny changes when he enters by chance an antiques shop, containing an exceptional bric-a-brac, the long description of which is fantastical: the vestiges from all the civilisations of the past are piled up there, in a mess, like “a mirror full of facets, each one representing a world”, and without any hierarchy, with worthless objects neighbouring inestimable works of art. Finally, the antiquarian presents Raphaël with his most precious object, a skin hanging on the wall, which has the power to fulfil all the desires of its owner, while also endangering his life: after each desire, it will shrink, just like his lifespan. Such is the meaning of the inscription in Arabic engraved into the skin, which Balzac included in his text, after the illustrated edition published by Delloye and Lecou in 1838, and for which he sought out the aid of Baron Hammer-Purgstall, an Orientalist whom he had met in Vienna in 1835. In the previous editions, the first one going back to 1831, the inscription appeared only in French, in a triangular form inspired from a tale in the Thousand and One Nights, the “original”  version of which the hero manages to decipher thanks to his knowledge of Sanskrit; but, when Balzac included the inscription in Arabic, he forget to correct this allusion to Sanskrit, which remained in the text up to the final edition...

However, the main point, of course, is less the referential accuracy than the symbolic value of this skin: it provided the novelist not only with a way to illustrate his philosophical theory about the dangerous, and even fatal, nature of excessive passions, but also to stage the failure of science before a magical object coming from a different civilisation. Raphaël is a scholar (the text actually presents him as being an Orientalist): attracted by the strange light that the skin projects in the darkness, he studies the particularities of its grain so as to demonstrate “mathematically” the reason for the phenomenon as described by the old antiquarian; furthermor, he makes no bones about showing his scepticism about the “superstitions of the Orient”. However, when he tries to cut into the skin with a blade so as to understand how the inscription has been placed there, it resists, disturbing the young man for the first time. What happens next is well known: this incomprehensible skin acquires a fundamental role as a disruptive element undermining the era’s basis of knowledge, which fails to get to the bottom of its secrets and, above all, in respect of Raphaël’s sole ungranted wish, to become extended, even by using mechanical presses and chemical solvents; in the same way, by the bedside of the dying hero, we witness the defeat of medicine by this incurable illness. This talisman reveals both the corruption of a materialistic society (as in all Raphaël’s wishes which are granted by the skin) and the illusion of a positivist approach to the world, which becomes the emblem of a crisis of values.

A dialectic between civilisations also runs through another text presented here, Une passion dans le désert, a short story published in December 1830, and then included in the “Scenes of Military Life” and meant to be part of the series of Les Français en Égypte. It tells the story of a young soldier in Napoleon’s army who, during the Egyptian campaign of 1798, is imprisoned by the enemy, and “taken to the deserts situated beyond the cataracts of the Nile”. In this unknown space, the prisoner escapes during the night and starts wandering alone in the desert: at the same time, he also leaves behind history (that of the Napoleonic conquests) and the territories that are identifiable thanks to geographical knowledge. The Orient, here figured by the desert, is a genuine void, in which the young soldier, nameless and deprived of combat, loses his social status, as well as his perceptive capacities before the immensity of space.

The desert thus seems to stand for the overall collapse of culture, in the broadest sense of the term: the codes of knowledge, social, historical and geographic determinations, empirical or even scientific knowledge, as can also be seen in the unfortunate adventure of Armand de Montriveau in La Duchesse de Langeais, with his exploration of Upper Egypt, aimed at resolving geographical problems which “excite so much interest among scholars”, will result in a terrible crossing of the desert in captivity, leaving behind in general just “shapeless memories”. Une passion dans le désert presents such a crossing as a genuine experience of the infinite, in a space where codes are inverted: for it is here that the young soldier has a romantic experience – his passion in the desert – with a panther.

While Balzac never visited the Orient, he turned it into a metaphor for an unveiling, using it as a kind of chemical reaction which, like sunflower paper, makes visible the critical state of western society