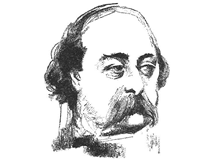 Gustave Flaubert (1821-1880)
Sophie Basch, professor of French literature at the University of Paris-Sorbonne
Access the documents

Even though his Voyage en Orient was published posthumously, the great novelist Gustave Flaubert contributed to his century’s passion for the Orient with his Temptation of Saint Anthony, Salammbô and Herodias.

When he set off for the Orient, the novelist Gustave Flaubert (1821-1880) had already visited his native Normandy, Paris, Versailles, Fontainebleau, the Pyrenees, Corsica, Provence, Italy and Switzerland. He had completed the first draft of a long philosophical prose poem, The Temptation of Saint Antony, a burlesque, disenchanted meditation on this anchorite who had retired to the Egyptian desert, where the Devil tempted him, in the form of voluptuous earthly visions; he was to publish it only in 1874. The manuscripts of the first three stages in the drafting of The Temptation of Saint Antony (1848, 1856, 1870-1872) and a projected oriental tale, Anubis, a prefiguration of Salammbô, can be consulted on Gallica, as well as the three fragments that Flaubert published in the review L’Artiste, which have also be digitized (21 and 28 December 1856, 1st February 1857).

In 1843, the year when he began the initial version of Sentimental Education, the future author of Madame Bovary met the writer and photographer Maxime Du Camp, with whom he went on an excursion to Brittany in 1847. Flaubert started his oriental travels on 29 October 1849. He visited Egypt, Palestine, Rhodes and Asia Minor, before returning to France in 1851, via Greece and Italy. Flaubert did not publish his narrative of this journey, whose exoticism gives a particular savour to his charges against clichés and bourgeois stupidity, which are particularly virulent in his letters to his mother and his friend, Louis Bouilhet: his correspondence can be read alongside his narrative, which was published for the first time by Louis Conard in 1910. It was then necessary to wait until 2006 to see in Claudine Gothot-Mersch’s edition, published by Gallimard, the complete text of this Voyage en Orient. The travel notes, preserved at the Bibliothèque Historique de la Ville de Paris, can also be consulted on Gallica (Carnets n° 4, 5, 6, 7, 8 et 9).

From April to June 1858, Flaubert travelled in Algeria and Tunisia, for his future “Carthaginian novel”, Salammbô, “Thebaid, where disgust for the modern world had pushed him”, in which the critic Émile Faguet sees a material pessimism, answering to the abstract pessimism of The Temptation of Saint Antony. Intentionally realistic, to counter romantic impulsions (Flaubert said of Victor Hugo that he was the man who had made his heart beat fastest since his birth), the writer embarked on an historical novel set in the 3rd Century BCE, in Carthage during the Mercenary wars. He spiced up his usual material with a Carthaginian sauce. For example, in early May 1861, he invited the brothers Jules and Edmond de Goncourt to dinner: “At 7 o’clock, oriental dinner. You will be served with human flesh, bourgeois brains and tigress clitorises fried in rhinoceros butter; after coffee, renewal of the Punic oration until the listeners pass away. How does that sound?” After 5 years’ work (as can be seen in the manuscripts, drafts and notes preserved by the BnF), in April 1862, Flaubert finally completed Salammbô which, after being published in November, sold a thousand copies a day, despite criticisms of his archaeological documentation. Jealous of his success, the critic Sainte-Beuve and the scholar Guillaume Froehner baited him about his archaeological documentation, as though the novel’s value depended entirely on its historical accuracy. As well as reading ancient texts, Flaubert had also turned to his scholarly friend, Ernest Feydeau, who had also advised Théophile Gautier for his Roman de la momie: Feydeau imposed on him an exactitude in the mood, more than in the facts. To his detractors, Flaubert victoriously opposed the credo, as confided to Feydeau in 1857: “I shall tell nothing of Carthage before the last line has been written, because I have enough doubts of my own, without adding to them others that you might give me. Your observations would make me lose my wits. As for the archaeology, it will be “probable”. That is all. Just so long as it cannot be proved that I have said anything absurd, that is all that I demand. When it comes to botany, I really could not care less. I have seen with my own eyes all the plants and trees that I need. What is more, this matters little, it is a secondary side. A book can be full of enormities and errors, and still remain extremely beautiful.” The novel’s success was to be consecrated by posterity. Its spectacular character Salammbô, daughter of the Carthaginian Shophet Hamilcar, the general of the mercenaries who have revolted because they have not received their pay, after their participation in the first Punic War, and who dies on the day of her marriage with the King of the Numidians, on seeing the execution of her Libyan suitor Mathô, cursed for touching the cloak of the goddess Tanit, has inspired musicians (Ernest Reyer, Modest Mussorgsky, and more recently Philippe Fénelon), numerous painters and sculptors (Théodore Rivière, Alfons Mucha, Gaston Bussière), without forgetting countless literary and university essays.

Flaubert’s final contribution to literary orientalism, set in Palestine under Roman domination, is Herodias, a short story taken from an episode in Mark’s Gospel, and published in Le Moniteur universel before being included in 1877 in Three Tales: prisoner of Herod Antipas, on the demand of his wife Herodias, Iaokanaan (Saint John the Baptist) criticises the tetrarch for having married his own niece, who hates him. During his birthday festivities, Herod promises to give a very young dancer, Salomé, whatever she desires: on the request of her mother, Herodias, what she asks for is Ioakanaan’s head. In 1881, Flaubert’s tale inspired an opera by Jules Massenet, Hérodiade. The figures of Herodias and Salomé also influenced the poet Stéphane Mallarmé, the painter Gustave Moreau and the dramatist Oscar Wilde. As an admirer of Flaubert, Anatole France, who had just published Thaïs (an oriental tale which Massenet also adapted into an opera in 1894), wrote the preface to a 1892 re-edition of Herodias, illustrated by Georges-Antoine Rochegrosse.

The manuscript of Herodias was donated on 11th May 1914 by the author’s niece, Mme Franklin-Grout, to the BnF where it was referenced N.A.F. 23.663. The manuscripts of Trois Contes are accessible on Gallica: vol. I and vol. II.