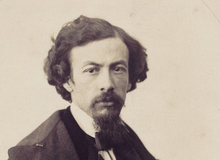 Born in 1820 in the milieu of Parisian tradesmen, Le Gray soon abandoned his law studies, which his parents had desired, to devote himself to painting. In the studio of Paul Delaroche, he met two great future photographers, Charles Nègre and Henri Le Secq.

Born in 1820 in the milieu of Parisian tradesmen, Le Gray soon abandoned his law studies, which his parents had desired, to devote himself to painting. In the studio of Paul Delaroche, he met two great future photographers, Charles Nègre and Henri Le Secq. He stayed in Italy from 1843 to 1847 and it was only on returning to Paris with his family, after having married an Italian woman in rather vaudeville-like conditions, that he started taking photographs. He opened a studio at 110 rue de Richelieu then, in 1849, at 7 chemin de ronde de la Barrière de Clichy on the outskirts of Paris. At around this period, he started frequenting painters, such as the renowned Orientalists Jean-Léon Gérôme and Eugène Fromentin.

His extremely advanced knowledge of the techniques of photography on paper and the decisive advances he made, allowed him to benefit from high society’s enthusiasm for what had become a fashionable hobby. He thus gave photography lessons to a large number of rich amateurs. Among them were such pioneers of photography in the Middle East as Maxime Du Camp, before his trip to Egypt with Gustave Flaubert, Auguste Salzmann and John Beasley Greene. He took part in the 1851 Heliographic Mission, conceived under the aegis of Prosper Mérimée, and brought back from it a corpus of exceptional works. He regularly went to the Fontainebleau forest in the years between 1849 and 1855, thus drawing even closer to the world of artists.

His participation in the Société Héliographique (founded in 1851) then in the Société française de photographie (which succeeded it in 1854) was vital for the development of photography. He revealed his technical discoveries in numerous articles and in manuals.

In 1855, borne up the wave of prosperity at the start of the Second Empire, he opened, with the financial support of a family of Normand aristocrats, a luxurious studio at 35 boulevard des Capucines. This was the period of his greatest commercial successes: seascapes which captured the enthusiasm of all Europe, imperial commissions (album of the Camp de Châlons, portraits of the Empress, etc.). He also took part in a very large number of exhibitions in France and abroad.

In 1860, because of the poor financial management of his studio atelier, he was abandoned by his backers and went bankrupt. He abruptly left France, leaving behind his family to follow Alexandre Dumas on a Mediterranean cruise aboard the yacht L’Emma. Dumas was gripped by Garibaldi’s cause and he and his friends arrived in Palermo where Le Gray became a war reporter, sending his photographs to the illustrated press in Paris. A falling-out then occurred, caused by Dumas’s young mistress: Le Gray and two others were literally abandoned in Malta on 13th July 1860. He then wandered through Lebanon and Syria, which was in the throes of massacres between the Druse and the Maronites. Le Gray then set up his studio in the ruins of the temple of Jupiter in Baalbek. In 1861, he finally arrived in Alexandria.

Unable to return to France because of his debts and a court case with his backers, he settled his affairs, but very poorly, at a distance without giving any news to his family. He set up home in Egypt, where he received commissions from Ismail Pasha, for example accompanying his sons on a trip along the banks of the Nile, or photographs of travellers such as the Comte de Chambord or the Prince of Wales, before finally moving to a fine Arabic house in Cairo, just as other Orientalist artists did at the time. He struck up a friendship with the architect Ambroise Baudry, the great figure of the protection of old Cairo against the assault of westernisation. He obtained a post of drawing teacher at the Ecole Polytechnique in Cairo, and continued to photograph and paint.

In 1883, he tried to marry a young Greek woman, with whom he had just had a son, thus reproducing his Italian misadventures, forty years later, but as there was no proof that his first wife had died, the marriage was annulled under a suspicion of bigamy.

Le Gray died in Cairo in July 1884 at the age of 64, but it is not known of what, or in what circumstances. The contents of his house and studio were scattered a few weeks later among a general indifference.

Only Nadar, with whom he had a rather ambiguous relationship of friendship and rivalry, mentioned him in his memoires, which were published in 1900: Quand j’étais photographe. It was then necessary to await the 1980s for the amplitude and importance of his work to be understood, and for the silence that grown up around him and his memory, after his failure and flight, to be broken.

The work he produced in Egypt is far less well-known and distributed than his French work. His inventory after his death consisted of two hundred and twenty-two negatives, which is not much for twenty years spent in Egypt. And yet, the number of his known images is even smaller. The BnF possesses some of them.