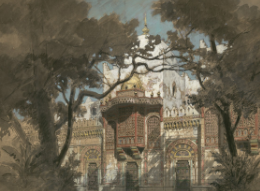 Translated from a Persian original, arabicized and modified under its new title, The Thousand and One Nights, this multi-layered work permanently enters Western culture thanks to Antoine Galland, its first adaptor. Provoking real enthusiasm, it also gives birth to many adaptations.

The Arab poet’s ode starts with a journey, an expedition in the footsteps of his departed beloved. Its many parts open up many meaningful poetic themes. Likewise, the history of the Thousand and One Nights is a long journey tracing through multiple layers. Its various stages give rise to many metamorphoses. Origins go back to the Hindu East reaching the Arabic world between the end of the 8th and the beginning of the 9th century, thanks to the translation of A Thousand Tales, a collection of Persian stories. The content then changes, taking on an arabicized hue, while its new title announces a nocturnal narrative for more than a thousand nights. Yet the tale’s framework remains the same: in that, the vizier’s daughter, Scheherazade, cures the sultan Schahriar from his murderous madness through her narratives lasting nearly three years. The Thousand and One Nights are thus the outcome of a stable framework (storyteller confronting the king) and a variable principle: tell a story to save a life or gain survival. Their combination allows for further variations according to taste and period. Yet, the work’s anonymity, differing levels of language, and the importance it grants to fiction, set it well apart from classical Arabic literature, based on very different criteria.

At the dawn of the 18th century, the journey continues westward thanks to Antoine Galland. Former envoy in the East, this learned and scrupulous scholar begins translating the adventures of Sinbad that do not belong to the Thousand and One Nights, but will be incorporated therein by him. He continues apace with tales of the Nights themselves, to entertain his vigils, relying on several manuscripts, including the incomplete one, in three volumes, which today bears his name. When these run out, he completes his collection working on summaries of tales narrated by Hanna Dyab, a Maronite Christian from Aleppo, among which are two of the most famous, Aladdin and Ali Baba. Compiled thus between East and West, the Nights gain a new vigour. The twelve-volume Galland version (1704-1717), originally entrusted to Barbin, the bookseller, encounters the fashion of fairy tales that the same Barbin promoted. Finally acclimatizing the Arabic collection in the West, this provokes a genuine craze, giving birth to the oriental tale genre, as shown by Galland’s numerous competitors and successors, such as François Pétis de La Croix with The Thousand and One Days (1710-1712), Thomas-Simon Gueullette and his Thousand and One Quarters of Hour, Tartarian Tales (1715), Jacques Cazotte and Dom Chavis with A Continuation of the Arabian Nights (1788-1789). Parody corroborating success is proven, amongst others, by Jacques Cazotte’s A Thousand and One Follies (literally Twaddles), Cock-and-Bull Stories (1742).

Galland’s version is a landmark for several reasons. His complex exertions correspond to the initial composition of the Thousand and One Nights, where translation, adaptation, compilation and invention convene. Far more than just a translator, Galland instigates and remodels a work that, without him, would probably never have come to light. He restores the prestige of a collection considered with suspicion as frivolous, firmly establishing it in both West and East. In so doing, he modifies a genre that supposedly represented Arabic literature: to poetry, privileged hitherto, he substitutes narrative fiction. Moreover, in the 18th and 19th centuries, Galland’s version works as a template: The Thousand and One Nights are translated from his French, not from Arabic, into main European languages. And even when translations from the Arabic compete with it, as in Great Britain, it is the English translation of Galland that readers long favour. Last, but not least, his elliptical, cautious, evasive text turns the Orient into a colourful and voluptuous myth.

Many Galland reprints contribute to the collection’s notoriety. Images further enhance their popularity. Some, like the Bourdin edition (1838-1840) in three volumes, with an introduction by the orientalist Antoine-Isaac Silvestre de Sacy, are even profusely illustrated. The first, skilfully illustrated, version of Gautier’s The Thousand and Second Night competes with Bourdin.

Galland’s popularity is further strengthened by a variety of adaptations for a wider range of audiences. Ali Baba and Aladdin, although an addition to the Nights, are the most valued.

Ali Baba, or the Forty Thieves, an entertaining melodrama by René-Charles Guilbert de Pixerécourt, met with honourable success at the Parisian Gaîté theatre in 1822. However, two of the most striking scenes in the tale, the sewing-up of Cassim's corpse and the dagger dance, had been discarded in favour of snares and conspiracies, typical of melodrama, as well as feminine cunning. As the tale of a scallywag’s education, Aladdin lends itself to the children's book: the publisher Charles Letaille introduced the tale, along with Ali Baba, in his "Library for the Young or Amusing Readings", with cut-out standing props printed in sepia, to complement reading with images. But he abridged the text and introduced a religious significance, making the lamp a symbol of the divine light itself (p. 122-124). Reading for mere pleasure was not entirely discarded : The Thousand and One Nights told to Baby by Theodore Lefèvre (1833-1904), who published the collection "The Baby’s Library" under the feminine pseudonym of Mrs Doudet, managed to bid in 48 pages under a cardboard cover seven tales of the Thousand and One Nights severely abridged, but illustrated by many artists’ colourful stencils.

"Who would do away with illusion?", asked Ernest Laboulaye, keen to listen to tales for two thousand nights. This politician and law historian, professor at the Collège de France, hardly gave Arab fiction the cold shoulder. His Abdallah or The Four-Leaf Clover (1859), which inspired the Swede Frank Heller with a ‘Thousand and Second Night’ (Den tusen och andra natten, en arabesk, 1923), was often reprinted, sometimes enlarged by other Nights tales.

In a nutshell, from these journeys arises a varied library, bearing on the Galland version. Having delighted readers for two centuries, it was eclipsed by Dr Joseph-Charles Mardrus’s The Book of the Thousand Nights and One Night (1898-1904) that also initiated a major orientalist cultural episode in the West.