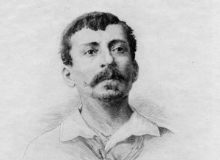 It was in Stamboul, the old heart of an ancient empire, that Pierre Loti, the final epigone of romanticism, was to have an experience that would radically alter his life and give it an aspect that is still familiar to us: that of a travel-writer, and a unique, multiple man.

Even if what is remembered now are a few of his novels (Aziyadé, Pêcheur d’Islande, Madame Chrysanthème), thus reducing Pierre Loti (Rochefort, 1850-Hendaye, 1923) to an author of clichés – which are in fact part of the narrative devices in his writings – this writer published a good forty books. Loti was firstly an officer: his career in the navy determined and orientated his literary career, but while Loti travelled across the world, it was the Ottoman Empire that became his second home.

On 3rd May 1876, Loti left Toulon for Salonica. While he had stayed briefly in Smyrna and Marmaris in October 1869, this initial trip had not been decisive in determining his relationship with the Middle East. This time, he met and fell in love with a young married Turkish woman, Hakidjé, the model for Aziyadé. He published articles in Le Monde illustré: his texts and drawings appearing in this weekly periodical in the inside pages, then on the cover. From 1st August to 17th March 1877, he stayed in Stamboul, where he was joined by his lover. He then lived in turn in Pera, Hasköy, and Eyüp, gradually melting into the crowd, adopting the country’s clothes and costumes, while observing it closely. The next summer, when back in France, he read to some of his friends his “Turkish diary”: their enthusiasm convinced him to write a novel, which was published anonymously by Calmann-Lévy on 20th January 1879: Aziyadé (Stamboul 1876-1877). This novel was a failure and it was only later, after the still-anonymous publication of Le Mariage de Loti, that he acquired a reputation, and then a name: in the Monde illustré, an article was signed by “M. Loti”; this pseudonym only became confirmed in 1882, on the cover of Le Roman d’un Spahi, after Le Figaro had revealed the author’s identity.

After Aziyadé, the Ottoman world became the focus of a large number of visits and expeditions. For example, he stayed from September to November 1880 in Ragusa and Montenegro (Fleurs d’ennui, 1882). However, he did not return to Stamboul until 1887, while on leave. From Rumania where Queen Elisabeth (Carmen Sylva), his German translator, had invited him, he went to Constantinople: during a stay of just three days, he heard of the death of Hakidjé and of Memet (Achmet) and sought out their graves. The result was Fantôme d’Orient (February 1892), the sepulchral counterpart of an already funereal initial novel: they thus form a diptych. In March 1892, he published a text entitled “Constantinople” in Les Capitales du monde (Hachette), which later reappeared in L’Exilée (May 1893).

On leave from February to May 1894, he visited the Holy Land. From Egypt, he crossed the Sinai before reaching Galilee and Jerusalem, and then Damascus and Baalbek. It was a quest for God that had inspired this journey, which was to be a journey to Damascus lacking in any revelation. This crossing of arid or desert lands became a trilogy: Le Désert (January), Jérusalem (March) and La Galilée (October 1895). On the way back, Loti visited Constantinople, but this was only a stopover: he really returned to this city only in 1903. On 9th September, he took up command of the aviso Vautour, the embassy’s stationary vessel. Among the officers on board was Claude Farrère, who published a book of memoirs in 1929. During this stay in Stamboul, Loti had one of his strangest experiences. On 16th April 1904, he met three women from the Turkish high society who claimed to be his admirers. One of them was the journalist Marie Léra, alias Marc Hélys, who instigated a confidence trick that went even further than she had intended. The friendship between the writer and these women grew, until his departure, on 30th March 1905, and then continued by letter; finally, a novel came out: Les Désenchantées (July 1906). This hoax was revealed by its originator only in 1924, in L’Envers d’un roman: le Secret des Désenchantées. The journalist’s account greatly contributed to the decline of Loti, who turned into the “idiot” of the Surrealists, alongside Barrès the “traitor” and France the “cop”.

In 1907, Loti went to Egypt, as the guest of the nationalist leader Mustafa Kamel. From January to May, he travelled through the country: La Mort de Philae came out in January 1909. Just as in his narrative L’Inde (sans les Anglais), Loti rejected the colonial presence, while wiping out the “Cooks” and “Cookesses” of rising modern tourism, while focusing just on the country’s civilisation and population: already in 1883, in three striking articles in the Figaro, Loti had criticised colonisation. After retiring, he travelled less. However, he did return to Constantinople from 15th August to 23rd October 1910, before publishing Turquie agonisante in January 1913: in it, he took up the defence of this country, and never reneged on his commitment to a land he felt deeply attached to, and whose future dismemberment, as desired by the western powers, he saw as the end of a civilisation. Loti went back once more to Stamboul in 1913, from August to September, and thus witnessed the Second Balkan War. In Stamboul, as in the rest of the country, he was now seen as a national hero.