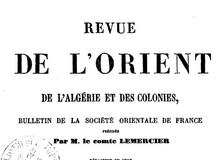 The first newspapers to appear in the Middle East came from foreign and not local initiatives. As of the end of the 18th century, in the context of a propaganda effort from the revolutionary government, the French published the first gazettes, in French.

In 1795 a Bulletin des Nouvelles appeared from the press of the French embassy in Constantinople, soon to be followed by the Gazette française de Constantinople. These were the first newspapers to be printed in the Middle East.

The occupation of Egypt put an end to the publication of the French press in Istanbul, but Bonaparte took two printing presses equipped with Arabic, Greek and Latin characters to Cairo. On 12 Fructidor, year VI (29th August, 1798), the French printed the first issue of Le Courrier d’Égypte which, published every five years, reported on local and sometimes European news. In all, a hundred and sixteen issues appeared. This bulletin, as well as La Décade égyptienne, were entirely written in French. In 1800, the first newspaper in Arabic, Al-Tanbîh (the Warning) came out, but its lifespan was short.

The first periodical to come out regularly was an official gazette, Al Waqaye‘ al Misriya (Egyptian Events) the first issue of which appeared in Cairo on 20th November 1828. Its Ottoman equivalent, Takvim-i Vekâyi, was launched in 1831. This was the only newspaper in Turkish, until an Englishman, William Churchill founded, in 1840, the first non-official newspaper in the form of a weekly bulletin, the Djeride-i havadis (or Gazette of Events).

Alongside a large number of titles in French (Journal de Constantinople, 1830; Courrier de Constantinople, 1845; Stamboul, 1865; or Phare du Bosphore, 1870), in English (Levant Herald, 1856; Le sphinx égyptien, 1859; or The Egyptian Messenger, 1870), in Italian (above all in Alexandria), sometimes appearing in bilingual editions, papers were published by the various Greek, Armenian and Jewish communities.

There then gradually appeared an “opinion press”, the best known titles of which are, respectively, for Turkish: Vakit (The Time, 1875), Terdjuman-i Hakikat (Interpreter of the Truth, 1878), and for the Egyptians: Al Ahram (The Pyramids, 1875). A humoristic press also developed in the 1850s, with periodicals in Armenian, and in the early 1870s for the Turkish and Egyptian press. These satirical sheets, written in the colloquial language and illustrated by numerous caricatures, were extremely successful.

The first illustrated periodicals were born at the same time and, for the general grand public, there appeared illustrated magazines such as the highly official Musavver Malumat (Illustrated Knowledge, 1895) which tried to play the role of the French review L’Illustration. There was also a genuine women’s press, which had a real influence of the emancipation of women.

In the early 20th century, a genuine explosion of the press occurred. Between 1907 and 1909, the number of periodicals rose from 120 to 730 throughout the Ottoman Empire, and from 52 to 377 in Istanbul. In Cairo, in 1937, there seem to have been 200 periodicals in Arabic and 65 in foreign languages, including 45 in French; in Alexandria, of the 31 foreign titles, 20 were French. Egypt thus had over 300 periodicals, written in a dozen languages.

The Suez canal
The francophone press of Egypt