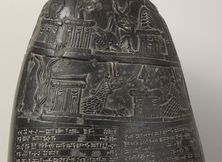 1842 marked the beginning of the French archaeological adventure in Iraq, when the French Consul Paul-Emile Botta opened the first excavation site in Nineva. In 1843, he started the digs in Khorsabad that in 1847 led to the foundation of the first Assyrian museum in the West.

The first French excavations in Mesopotamia started when, in December 1842, Paul-Émile Botta set about exploring Tell Kouyunjik. This vast field of ruins, which was already thought to be where the famous Nineveh was hidden, lay on the opposite side of the Tigris in Mosul, where he had just been appointed Consul. Disappointed by the initial discoveries, he soon directed his efforts towards the site of Khorsabad, at a distance of about fifteen kilometres. There he discovered the palace that the Assyrian King Sargon II (721-705) had built in his new city, Dur-Šarrukin. He explored just a tiny part of this sumptuous edifice, which is the largest known Assyrian palace –it covers over 10 hectares and contains over 300 rooms – but the importance of these discoveries incited the French authorities to open an Assyrian Museum at the Louvre in 184.

In 1851, two new missions were mandated in Mesopotamia. Victor Place was to continue the exploration of Assyrian sites, while Fulgence Fresnel, assisted by the epigraphist Jules Oppert and the architect Félix Thomas, was put in charge of the Expédition Scientifique et Artistique de Médie et de Mésopotamie. In 1852, Jules Oppert inaugurated the excavations of the former site of Babylon. Meanwhile, Victor Place carried on the examination of Dur-Šarrukin. He was helped by Felix Thomas, whose surveys are marked out by their elegance and precision, and by Gabriel Tranchand who, for the first time, photographed an ongoing excavation. The material discovered by these two was grouped together in a convoy, that went down the Tigris to reach the Persian Gulf. At the time, the South of Iraq was in full tribal rebellion, and the ships were attacked near Gurna. Of the 235 crates in the load, only 26 reached the Louvre. But, fortunately enough, one of the bulls that decked gate n°3 of Dur-Šarrukin was later fished up and exhibited.

It was only in 1877 that French excavations started again, under the direction of Ernest de Sarzec, the last of the “consul-archaeologists” to explore a site in the south of Mesopotamia, Tello, thus bringing to light the first Sumerian city. In 1881, the arrival of the first antiquities from Tello, including the Stele of the Vultures, and diorite statues of King Gudea (circa 2,120 BCE.), encouraged the creation in the Louvre of a department of Oriental Antiquities.

In 1933, André Parrot opened up a new site in Larsa, in the south of Iraq, which he soon abandoned after an initial series of promising excavations. No other French missions were to work in Iraq until the revival of the excavations in Larsa in 1967.

After the First Gulf War, work slowed down considerably. But since 2009, archaeology in Iraq has experienced a genuine boom with the opening of the autonomous region of Kurdistan (KRG), where six French missions are currently working, two in the region of Erbil (O. Rouault and M.G. Masetti-Rouault; L. Marti) and four in the province of Sulaymaniyah (V. Deroche, J. Giraud, A. Tenu and R. Vallet). The launch of new research programmes in this region, which was hitherto almost unexplored, has opened up new perspectives. This revival of French archaeological activity has been accompanied by the inauguration of a section of Institut du Proche-Orient (IFPO) in Erbil in 2010.