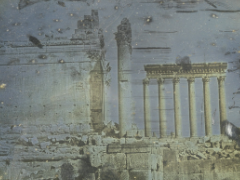 Lebanon’s main sites have never been forgotten. However, it was necessary to wait for the second half of the 19th century to witness the real beginnings of a scholarly exploration of the country, with the Phoenician mission directed by E. Renan, preceded by travellers who had brought back drawings, accounts, photos, as well as the first surveys and plans.

Lebanon’s main sites have never been forgotten, the continuity of the toponymy (Berytus – Beirut; Sidon – Saïda) and their occupation since Antiquity being a good explanation.

However, it was necessary to wait for the second half of the 19th century to witness the real beginnings of a scholarly exploration of the country, with the Phoenician mission directed by E. Renan, which published the first synthesis of the archaeology of the cities on the Phoenician coast (1864-1874), and provided the Louvre with one of its richest collections of Levantine objects.

Ever since the Middle Ages, what had come first were travellers, who had brought back drawings (L.-F. Cassas, Voyage pittoresque de la Syrie…, concerning a journey made in 1784-1786), accounts (Jean de Laroque, Voyage en Syrie et au mont Liban, published in 1722; tales of Journeys to the Orient by various writers, such as Nerval or Lamartine), then photos (Girault de Prangey, 1843-1844) as well as the first surveys and plans (J. de Bertou, Essai sur la topographie de Tyr, 1843).

At least since 1840, the presence in the Middle East of consular agents and merchants, associated with an interest in classical or pre-classical Antiquity, explained the establishment of a fruitful trade in ancient monuments. Some of the characters that stand out are Aimé Péretié, dragoman-chancellor of the French consulate in Beirut and discover of the sarcophagus of Eshmunazor (1855), or else the Durighello family who, between the 1850s and the 1920, stocked the Louvre, as well as other collections, such as that of Louis de Clercq (1836-1901), subsequently acquired by the Louvre.

Before long, Ottoman authorities sought to control this trade and organise the excavations, such as the one in Sidon (Th. Macridy Bey), while enriching the archaeological museum in Constantinople. They also issued permissions for excavations: in Baalbek, where Th. Wiegand directed the German mission and published the first synthesis of the site of ancient Heliopolis (1898-1905); or Sidon, where G. Contenau continued the exploration of the city’s necropolises (1914).

After the First World War, the management of antiquities began, firstly under the French Mandate, then within the borders of Lebanon (Ch. Virolleaud, H. Seyrig). A national museum inaugurated in 1942 brought these collections together, while the extremely active trade in antiquities continued until the 1970s, long after independence in 1943.

The mid-war excavations — by M. Dunand in Byblos — as well as the major explorations carried out by H. Seyrig in Baalbek, were followed after 1945 by large-scale work in Sidon (M. Dunand) and Tyr, where the major excavation of Emir M. Chéhab has been a major, ongoing project of the Direction Générale des Antiquités. Since the end of the Lebanese Civil War in 1990, there have been a large amount of emergency excavations in the centre of Beirut, before its reconstruction (since 1994), as has also been the case in other sites.