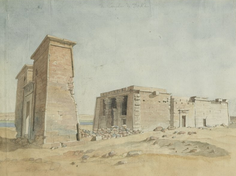 The Expedition to Egypt offered a point of anchorage in the construction of Egyptian archaeology which developed under a strong French influence: the decipherment of hieroglyphs by Champollion, the direction of Le Service des Antiquités de l’Égypte between 1858 and 1952, and the creation of a scientific school based in Cairo in 1880, the future Institut français d’archéologie orientale.

In the 16th and 17th centuries, pilgrims, merchants and travellers returned from the Middle East and Egypt, the land of the pharaohs mentioned in the Bible[1], with more or less fantastical tales and curiosities, mummies, and objects inscribed with hieroglyphs. For the French, Egypt was also one of the “Echelles du Levant”, with the presence of a little colony since the 16th century. Connections with the members of the Échelle in Egypt, ship captains, curious travellers, followed by explorers commissioned by the royal court, allowed several collections to be built up. However, until the 18th century, Egypt remained an Egypt of cabinets (for example the collections of Foucault and Caylus).

The Expedition to Egypt marked the departure point in the construction of Egyptian archaeology. It lay down the foundations of a discipline that did not yet exist [2], thanks to cartography and the identification of sites, the notes that were collected[3] but also its political consequences. The influence of France in the birth of Egyptian archaeological institutions, on the invitation of Mohammed Ali, can also be indirectly attached to it.

The collections of Egyptian antiquities of the Bibliothèque nationale de France included papyri and objects coming from, or identified during, the Expedition, such as le Livre des Morts de Ouahibrê and the Papyrus Cadet, the zodiac of Dendara[4], or else the antiquities brought back by the expedition of Cailliaud, undertaken in the steps of Bonaparte’s scholars.

Egyptian archaeology established itself in France with the enrichment of the national collections and the establishment of an Egyptian section at the Musée du Louvre. Champollion took it over in 1827 and suggested a revolutionary museography using a scientific and typological approach. He thus worked towards the acquisition of the obelisk of Luxor. After the Franco-Tuscan Expedition, Champollion, accompanied by Rossellini and Nestor l'Hôte, wrote a paper to attract attention to the demolitions and suggest a formalisation of the excavations, a request which was also expressed by Rifa’a al-Tahtawi.

In 1829, Emile Prisse d'Avennes was made the civil engineer of Mohammed Ali. He undertook the study and collection of ancient objects, motifs and Arab art, including the papyri now conserved in the BnF.

In 1850, Auguste Mariette, after the failure of his mission to gather Coptic and Syriac manuscripts, put together an archaeological expedition to Saqqara, where he exhumed the Serapeum. In 1858, Said Pasha made him the first director of the Service des Antiquités égyptiennes. He opened up a good thirty excavation sites including Abydos, Tanis, and Medinet Habu, and in 1863 set up a museum which was open to the public in Bulaq. In 1880, France, concerned about Mariette’s health and the possibility that the post of director of Antiquities would not be given back to a Frenchman, decided to affirm the French influence in the field of archaeology, in a context of competition with the British, especially W. Fl. Petrie (1853-1942)[5], and the Germans, such as K.R. Lepsius (1810-1884) and H. Brugsch (1827-1894). So Jules Ferry gave Gaston Maspero the task of planning a new scholarly Oriental school based in Cairo, the future Institut français d'archéologie orientale. Maspero took over from Mariette and opened its excavations to international cooperation. He strengthened the protection of Antiquities and empowered excavation missions with a new law, passed in 1912. He tried to raise awareness in Europe of the threat which the Asswan dam, built in 1898, posed for the temple of Philae and other monuments in the region. He pursued archaeological explorations, especially in Deir el-Bahari, Edfu and Abydos. In Saqqara, his excavations of the royal pyramids led to the discovery of the Texts of the Pyramids, published in 1894.

Meanwhile, in 1892, Jacques de Morgan, now director of Antiquities, updated Egyptian Prehistory, transcending the discoveries of Petrie in this field.

Alongside pharaonic archaeology, Maspero encouraged the exploration of important sites from the Byzantine period and vestiges left by the Copts, the first Egyptian Christians, such as Antinopolis with the work of Albert Gayet (1898-1908), at Bawit, or else monasteries, whose murals were analysed only much later, starting in 1969, with Pierre Laferrière.

In 1904, the Société française de fouilles archéologiques, founded by the director of the Cabinet des Médailles, E. Babelon, gathered private funding and supported the excavations in Egypt. It financed the work of A. Gayet, A. Reinach and R. Weill in Qift, and of the IFAO in the Thebes region. Thanks to G. Bénédite, the Louvre became associated with the IFAO to undertake excavations, especially on the sites of Medamud (1925-1933) and Tod (1933-1950).

The end of the 19th and the beginning of the 20th centuries were marked by major discoveries: the treasure of the princesses of Dahshur by Morgan in 1895, the court of the cachette in Karnak by Georges Legrain (1903-1907), delivering tens of thousands of objects, the discovery of the tomb of Tutankhamun by Howard Carter in 1922 or else the royal treasures of Tanis by Pierre Montet in 1939.

Since 1953, after almost a century of French direction, the Service has been run by Egyptian directors

[2] The appearance of the term “Egyptologist” can be dated to 1827 and “Egyptology” even later. The chair at the Collège de France held by Champollion was a chair of Oriental Archaeology; the chair of Egyptian Philology and Archaeology was decreed only on 8th February 1860 (S. Aufrère, Autour de l'émergence de l'Égyptologie, 2017, p. 29).

[3] We are not unaware of the essential role played by Pierre de Rosette in the decipherment of hieroglyphs and the vital contribution of J.-Fr. Champollion in the establishment of this discipline.

[4]It is currently at the Musée du Louvre, like most of the Egyptian lapidary collection in the Cabinet des Médailles.

[5]He founded the Egypt Exploration Society in London in 1883 and in 1894 the Egyptian Research Account (the future British School of Archaeology in Egypt).