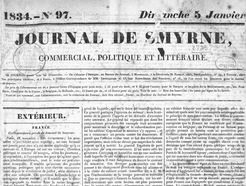 Francophone press in the Ottoman Empire
Lorans Tanatar Baruh / Sara Yontan Musnik, associate director of research and programmes at SALT / curator in charge of the Turkish collections at the BnF
Access to documents

This corpus of periodical publications with over 100 titles from the turn of the 20th century is a perfect illustration of the transformation of Ottoman society, which awakened to notions of modernism that were experienced in the interior and inspired from the exterior.

Throughout the 19th century, and at the turn of the 20th century, French was used as a means of communication in Constantinople, Salonica, Smyrna, Beirut and in most of the towns of the Eastern Mediterranean where trade and exchanges flourished. The French language became established in the newly created institutions in the wake of the reforms and a francophone community, which was French, Levantine or Ottoman, was born. In the words of Gustave Couturier, the owner of the Journal de Constantinople, the French language acted as a neutral territory “where people can meet without fear, a kind of common currency [...] for an exchange of Eastern and Western knowledge”.

As of 1795, when the first newspaper was founded, over 700 titles of periodicals, written either partly or entirely in French, were published on Ottoman soil. This figure is based on the work of G. Groc and İ. Çağlar, who surveyed the francophone press in Turkey from 1839 to 1980. About 400 titles were published in the Ottoman period. The authors had access to only 234 of them, preserved in libraries, the remaining being mentioned in books, reviews or press advertisements. This survey covered the entire Ottoman territory, including Egypt, which alone boasted 131 titles. The publications of opponents, in exile during the era of Sultan Abdul Hamid II, and that of the Young Turks, are also a part of these titles. In the Ottoman era, two thirds of those in the Groc and Çağlar’s catalogue were entirely in French, the rest being published in bilingual or even multilingual editions where French rubbed shoulders with Turkish, English, Arabic, Armenian, German, Hebrew, Bulgarian, Russian or Syriac.

The francophone Ottoman press was above all a press for French industrialists and tradesmen with interests in the Orient, and thus close relations with the Ottoman Empire. L’Annuaire oriental (Constantinople, 1880-1929), is a particular witness to this period with thousands of pages of information and advertisements in each issue.  The term also refers to a press published within the frontiers of current Turkey (especially in Istanbul and Smyrna, today's Izmir) but also in many countries under Ottoman domination, from Macedonia to Palestine. The francophone Ottoman press also belonged to the Levantine, Jewish, Greek and Armenian communities, which was thus also Jewish, Greek and Armenian. It was either hostile or loyal to the powers that be, as can be seen in two “Armenian” titles, La Patrie (1908-1913), an anti-separatist and deeply Ottoman weekly, and Pro-Arménia (1900-1914), a fortnightly organ for “Armenian claims”. Finally, it should not be forgotten that this press, published in Paris or Constantinople by Ottoman subjects or French citizens, was in turn that of the exiles and opponents to the Sultan, who hoped to heighten awareness of their cause in the West, and that of the existing power which barely dissimulated its political strategy aimed at reducing this opposition.

While the early titles are exemple of the French press in the Ottoman Empire, a more regular and lasting francophone press emerged after 1824 with such periodicals as, the Spectateur oriental and its successive titles, Le courrier de Smyrne and Journal de Smyrne (Izmir, 1824-1842). The 1850-1875 period, which was particularly favourable for this press, was followed by a long period of disturbances because of heavy censorship (1876-1908) but, paradoxically, also turned out to be prolific in terms of the number of titles, despite their uncertain life spans. So it was that, just for Turkish newspapers in French, 94 new publication authorisations were recorded in the space of just two years. Following the 1918 armistice and during the occupation of the Ottoman Empire, the French press benefited from a favourable regime, and endured long after the declaration of the Republic in 1923.  After the regime change, many Turkish titles also had a French edition to communicate the new westernised Turkey, forged by Kemalist reforms.  The decline of the francophone press started in the 1930s, and continued over the next two decades.

United under the heading “Franco-Ottoman Press”, this digital corpus of over a 100 titles is the fruit of a collaboration between the Bibliothèque nationale de France, the Institut français d’études anatoliennes, SALT Research and the Atatürk Library of Istanbul. It provides access to collections scattered between over 100 libraries and private collections. With the exception of Egypt, the entirety of the Empire has been covered, including the Ottoman press published in Europe. When it comes to the chronology, the period in question covers the 1920s before the republican regime was consolidated. This decade witnessed a transitional period marked by a free-market economic model and the presence of a large francophone community, whose decline had nevertheless begun at the end of the First World War. The francophone press would continue to occupy a significant place in Turkish media, until the end of the Second World War.