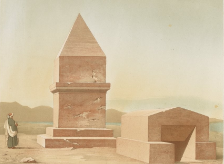 In the context of the scientific missions of the Second Empire, Ernest Renan led an archaeological expedition to the Lebanon, Syria and Palestine, on the tracks of the ancient Phoenicians.

On 9 October 1857, Ernest Renan presented at the Académie des Inscriptions et Belles-Lettres (where he had been elected the previous year, to the chair previously held by Augustin Thierry), a Mémoire sur l’origine et le caractère véritable de l’histoire phénicienne qui porte le nom de Sanchoniathon (Essay on the Origin and True Character of the Phoenician Story that Bears the Name Sanchuniathon). In a note to this display of erudition, he expressed the hope that the excavations of the sites of the ancient Phoenician religion might one day shed light on the epigraphic traces of the ancient cosmogonies of the land of Canaan, as could be glimpsed in the work of Sanchuniathon.

Three years later, thanks to the mediation of Hortense Cornu (a childhood friend of the Emperor and sponsor of the Second Empire’s scientific projects), Napoleon III put the young scholar in charge of an archaeological mission to seek out vestiges of ancient Phoenicia.

Accompanied by his sister Henriette, who acted as his secretary, Ernest Renan arrived in Beirut on 21 October 1860. During the first six months, he organised four series of excavations in the main centres of the Phoenician civilisation: Jubayl (Byblos), Tartus and the island of Arwad (Arados), Saïda (Sidon) and Sour (Tyre). The team was put together by Charles Gaillardot, a French doctor, long-established in Syria, and who directed the excavation and drew the maps; the journalist Edouard Lockroy, who took care of the photographs; and the architect-inspector of the Bibliothèque Impériale M. Thobois, who was in charge of drawing up the plans. The French expeditionary corps, sent by Napoleon III to protect Christians in the Orient after the massacres of 1860, provided precious logistical and material support.

In April, Renan and Henriette left on a trip to Palestine: they visited Mount Carmel, Haifa, Nablus, Jerusalem, Hebron, Jaffa, Nazareth, and Tiberias. They also visited Upper Lebanon, going up the Adonis valley, as far as Baalbek, the former Heliopolis.

This journey through the birthplace of Christianity was a great source of inspiration for Life of Jesus, which Renan started to write as soon as he returned to Ghazir, a village in the hinterland between Beirut and Jubayl where he stayed for over a month. As he wrote to his friend Marcellin Berthelot :

“I have succeeded in giving all this an organic motion, which is totally lacking from the gospels. I think that we shall as a result have living beings before our eyes, and not those pale, lifeless phantoms that are Jesus, Mary, Peter, etc., who have shifted to an abstract state and become completely typified. I have tried, as in the vibration of sounding plates, to provide the stroke of a bow that puts grains of sand into natural waves.”

The departure of the French troops during the summer of 1861 forced Renan to stop his excavations and prepare the dispatching of the archaeological findings. In July, his sister Henriette caught malarial fever, from which she was never to recover: she died on 24 September. Renan, affected by the same illness, was repatriated urgently on 10 October.

The material results of the excavations were far inferior to his expectations, in part because of the events that had shortened his mission: very few Phoenician inscriptions, a few Greek and Egyptian ones, some sarcophagi, tablets and reliefs which were nearly all anepigraphic. But among the major discoveries were the sanctuary and necropolis of Amrit, near Tartus.

A voluminous publication from the Imprimerie Impériale – two volumes published in instalments from 1864 to 1874 – an in-folio of 884 pages and a large in-folio of 70 plates – gathered together the mission’s results. Despite a certain “hellenocentrism”, which often led Renan to undervalue Phoenician art (“imitative art”, “above all industrial”, which “never rose, for their greatest public monuments, to a style that was at once elegant and lasting”), this work was to lay down the basis for future explorations and was to remain, for over half a century, “the main treatise on Phoenician archaeology” (René Dussaud).