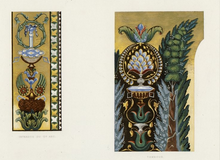 Palestine
Jean-Sylvain Caillou, co-director of the Franco-Palestinian archaeological mission of Samaria-Sebastia, the French Institute of the Middle East
Access to documents

The first scientific excavations in Palestine were initiated over a 150 years ago by French scholars. Because of the special status of the Holy Land, archaeology there has always involved specific issues.

When the Emperor Constantine set about finding Jesus’s tomb, in 325 CE, in a sense he launched archaeology in Palestine. However, such searches for relics were unscientific.

The first at least approximately critical and reasoned approaches appeared in the first half of the 19th century, above all in Chateaubriand’s Itinéraire de Paris à Jérusalem or E. Robinson’s Biblical Researches in Palestine. At the same time, architectural drawings gradually left behind the world of illustrations of pilgrims’ tales, and became scientific documentation thanks to L.-F. Cassas or L. de Laborde.

However, it was only at the beginning of the second half of the 19th century that archaeology really developed in Palestine. Until then, legislation forbad any excavations or intrusions into the Noble Sanctuary, the former Temple Mount, which was the main subject of debates about ancient Jerusalem. The removal of legal constraints, as well as the establishment of religious communities and western consulates, favoured research and the founding of minor museums. The enthusiasm was all the greater given that this archaeology’s objective was to check Biblical history, which had recently been brought into doubt by Darwin’s theory of the evolution of species, as well as Boucher de Perthes’s theory about the age of prehistoric man.

French scholars were the real pioneers of archaeology in Palestine, before their British counterparts started playing a predominant role. During his expeditions between 1851 and 1863, F. de Saulcy made some exceptional initial excavations. In particular, he examined the Tombs of the Kings, the greatest funereal monument in Jerusalem, which he wrongly attributed to David and Solomon. He was also recognised for his numismatic research. M. de Vogüé studied the architecture of the Eglises de la Terre sainte and the Temple de Jérusalem, which was then studied by Ch. Wilson and Ch. Warren. The first systematic prospections were conducted by V. Guérin, then by Cl. R. Conder and H. H. Kitchener. Finally, Ch. Clermont-Ganneau became famous thanks not only to his epigraphic discoveries, but also by unmasking the first objects made by counterfeiters.

Archaeological institutions gradually started appearing, firstly the Palestine Exploration Fund (1865), then French (1890), American (1900) and German (1990) schools. In the early 20th century, several large-scale, long-term excavation started in Gezer, Megiddo, Samaria and Jericho. This dynamic grew under the British Mandate between the two World Wars, with the founding of the Rockefeller Museum of Palestinian antiquities, while excavations continued and multiplied, some of them conducted by local archaeologists. This period was thus characterised by the growing activity of prehistorians, such as the Frenchman R. Neuvillle, as well as the beginnings of Islamic archaeology (excavations of Hisham in Jericho).

As of the end of the 19th century, French archaeology, mainly active in Egypt, Syria and Lebanon, was represented in Palestine by the Dominicans of the Ecole biblique de Jérusalem, above all Pères Lagrange, Vincent and Abel, who obtained international recognition thanks to the excellence of their work, conducted with limited means (it was only after the Second World War that France financed major excavations).