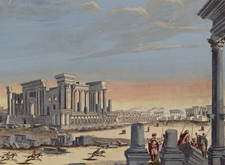 The scientific study of Palmyra only took off in the second half of the 19th century, when beginning in the 1860s, scholars replaced adventurers and started to come and work in Palmyra.

Even though the rediscovery of Palmyra at the end of the 17th century was thanks to English merchants coming from Aleppo in 1678, and that the first “successful” publication was that of the British “traveller-antiquarians” R. Wood and J. Dawkins (with the Italian draughtsman G. B. Borra) in 1751, at least two Frenchmen, Giraud and Sautet, had visited the town as early as 1705, followed in 1736 by Claude Granger. None of them left behind an account, but Giraud did produce a fine panorama of the ruins, which is now lost, but a copy of it by the engraver P. J. Mariette has been conserved at the library of the Institute. This view is at least as good as the one made by the Dutchman G. Hofstede van Essen in 1691. In 1785, another Frenchman, L.-Fr. Cassas (1756-1827), a talented draughtsman, spent several weeks in Palmyra and made there hundreds of drawings and watercolours in which his imagination sometimes led him to prettify reality somewhat. The French also played a considerable part in the scientific research that was then making its first steps. In 1754, at the same time as the English pastor J. Swinton, Abbé J.-J. Barthélemy (1716-1795) managed to decipher the Palmyrene language, showing that it was an Aramaic dialect. The many Greek and Palmyrene texts on the site thus became exploitable for writing its history. In 1758, J. Jouve (1701-1758), a Jesuit from Lyon, produced the first history of Zenobia, now freed from all the legends that were endlessly repeated on the basis of the novelist narrative in the Histoire Auguste, by using newly discovered inscriptions and coins.

Despite this, the scientific study of Palmyra only took off in the second half of the 19th century, when, beginning in the 1860s, scholars replaced adventurers and started to come and work in Palmyra. This was not a question of excavations, but a few opportunistic clearances, as discoveries were gradually made. An interest had already arisen a few years before in funerary portraits from tombs, thus taking over from the mummies that had hitherto attracted all of the attention, and peopling both private collections and museums. In 1891, the great bilingual inscription called the “Palmyrene Tariff” came to light, which established the rules of the municipal customs house. Presented as a gift to the Russian Prince A. Lazarev by Sultan Abdul Hamid II, this slab, cut into four pieces, was sent to Saint-Petersburg in 1901. German scholars (O. Puchstein, M. Sobernheim, Th. Wiegand) and a few Frenchmen played an important role in such discoveries and the publication of the town’s inscriptions, in Aramaic or Greek: W. H. Waddington in 1861 for the Greek epigraphs, R. Savignac and his colleagues from the École Biblique de Jérusalem in 1914, while J.-B. Chabot (1860-1946), without ever going to Palmyra, affirmed himself as a master of Palmyrene epigraphy.

Strangely enough, the multiplication of copies of inscriptions and summary archaeological revelations barely led to any progress in the knowledge of the history of Palmyra. Of course, no one questioned the interest of the site, but, while its traits taken from the Greco-Roman art of the Mediterranean were not denied, there was an insistence on the importance of indigenous traditions and the Greco-Roman culture was judged to be “superficial”. This analysis was backed up by the fact that no one really examined the status of the town, which was perceived as being a client-kingdom buffer state between Rome and the Mesopotamia of the Parthians and then the Persians. However, no one doubted that Zenobia had been “Queen of Palmyra”, even though no ancient text gave her this title and coins quite clearly designated herself as being Empress of Rome (which is confirmed in the Histoire Auguste which places her biography, however fantastical it might be, among those of the Roman Emperors).

With the establishment of the French Mandate over Syria and the establishment of a Service des Antiquités in 1920, the scale of archaeological research changed, with Palmyra being one of the main beneficiaries. Hasty explorations, often with no follow-up, were replaced by the introduction of genuine programmes for work on the town’s main buildings. So it was that the great colonnade was raised from the sand, as well as the great arch situated between sectors A and B of the colonnade. The (late) ramparts of the town were studied in detail by A. Gabriel, and in 1929 the Service des Antiquités, under the aegis of Henri Seyrig, seconded by Robert Amy, set about freeing the Temple of Bel and its enclosure from the dwellings that obscured it. A monumental publication of these projects, with which Ernest Will was associated after the war, appeared between 1975 and 1982. At the same time, there was an exploration of the necropolises, from which a large number of busts and inscriptions were taken. There were so many of the latter that J. Cantineau launched an Inventaire des inscriptions de Palmyre of which he published, on his own, nine fascicules from 1930 to 1933. Abbé J. Starcky, appointed priest in Palmyra (where a French garrison was stationed), continued Cantineau’s work in the late 1930s.

The mandatary power played an essential role, but projects were also entrusted to foreign missions, in Palmyra and elsewhere in Syria. In the 1920s the Dane H. Ingholt led three excavations in Palmyra, exploring over 50 tombs with M. Dunand in 1924, with A. Gabriel in 1925, and with a Danish architect in 1929, before excavating, in the mid-1930s the tomb of Malku Son of Malku in the South-West necropolis. He greatly contributed to enriching the Ny Carlsberg Glyptotek in Copenhagen, in particular donating to it the “Beauty of Palmyra”, a female bust found in the so-called Qasr al-Abyad grave, in the valley of the tombs. This same scholar was also associated with the publication of the tesserae of Palmyra, which was concluded only in the mid-1950s.

This archaeological work was accompanied by a re-evaluation of Palmyra’s historical importance, even if progress was slow in this field, perhaps because expect for a few rare scholars, such as H. Seyrig, who had a general knowledge of the Greco-Roman world, the interior of Syria was the concern of a few highly specialised linguists and archaeologists. While Seyrig had no doubts about the entry of Palmyra into the Roman Empire, D. Schlumberger established the basis of an analysis of the town’s institutions in a typically Greek institutional context. Even more interestingly, this same Schlumberger later placed the art of Palmyra in a broader setting, in a fundamental article on “The Non-Mediterranean Descendants of Greek Art”, published in 1960. Meanwhile, for many, Palmyra remained a kingdom on the margins, with an uncertain status, more interesting for what was spectacular about it than for its own history.

With the end of the mandate and the independence of Syria, work increased, both with large-scale restorations and excavations (the temple of Bel, the temple of Nabu). Missions from the entire world worked in Palmyra, more and more often in association with the DGAM of Syria: the Swiss in the temple of Baalshamin, the Poles on Diocletian’s Camp, the temple of Allat, the tomb of Marona, in the houses to the north of the great colonnade and the churches; the French in the agora, and the tomb of the Three Brothers; the Japanese in the South-East and North necropolises; the American at the Efqa source; Germans on tomb 36 and the so-called “Hellenistic” quarter, as well as the quarries to the north of the town; Italians in the South-West quarter of the town; and Norwegians in the north-eastern jebels.

The points in question constantly became enriched and modified as discoveries were made, and above all with the preoccupations of contemporary society, which had long been deformed by the legends associated with Zenobia, Oriental stereotypes and a romantic vision of the desert. The multicultural nature of this ancient city speaks to our modern societies, and we are now far from the period when we measured the degree of “civilisation” of indigenous societies by how “Hellenised” they were. Instead, Palmyra now seems to us to be a good example of a society which succeeded in adopting what suited it from Greco-Roman influences, while remaining deeply itself. Of course, many legends about Palmyra are still in vogue, as well as many stereotypes against which historians’ work can do very little. From western Orientalist traditions, extreme nationalism has inherited a Zenobia who is a prefiguration of the anti-colonial struggle, even though, far from presenting herself as the sovereign of a hypothetical “kingdom of Palmyra”, she quite clearly proclaimed herself as being Empress of Rome. It now also seems clear that those who want to see the Greco-Roman elements of Palmyrene culture – which was certainly composite, and even cosmopolitan – as a superficial varnish are working in the same direction, with a kind of “modernist” posture, as if the decision to decorate your tomb or house with paintings or mosaics with themes from Greek mythology, used at the same era by neo-Platonic philosophers, were simply a question of fashion, a superficiality of appearances, with a concern for social distinction. If a superficial varnish can be found anywhere, then it is above all in this type of global analysis, which limits all individuals to having identical motivations, without paying attention to each person’s inner feelings. Palmyra’s rich and lively society cannot be reduced to such caricatures, and its variety and originality still have a lot to teach us.