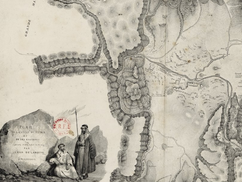 Jordan
Laurent Tholbecq, professor at the Université Libre de Bruxelles and director of the French archaeological mission at Petra
Access to documents

The scholarly French presence on the territory of the current kingdom of Hachemite Jordan goes back to 1828, with the pioneer exploration of Petra by the engineer L. M. Linant de Bellefonds and the young Léon de Laborde. Their account was published in 1830 under the title Voyage de l’Arabie Pétrée.

The scholarly French presence on the current on the territory of the current kingdom of Hachemite Jordan goes back to 1828, with the pioneer exploration of Petra by the engineer Louis Maurice Linant de Bellefonds (1798-1883) and the young Léon de Laborde (1807-1869). After leaving Cairo, the two of them reached Petra from the south, after crossing the Sinai; they drew a map of the site, recording a few rock-cut tombs, while L. de Laborde made a good thirty drawings evoking the main monuments of the site; the account of this journey was published in Paris in 1830 in a large, remarkably well illustrated folio, which was to remain the reference book on Petra during the entire 19th century. In the spirit of the campaign in Egypt (1798-1801), the travellers gathered a large amount of information about the fauna and the flora of Arabia Petrea, even putting together a collection of plants; it was published in 1833 by Alire Raffeneau-Delile (1778–1850), an eminent botanist who had taken part in Bonaparte’s expedition 35 years earlier, and who had published a Flore d’Égypte in 1813.

The future emirate of Transjordan (1920-1936), which belonged at the time to Ottoman Syria, also appeared in the account of a journey made in 1826 from Asia Minor by L. de Laborde and his father, from Antioche to Jerusalem, via Palmyra. So it was that, in 1837, an illustrated description of the ruins of Jerash and Amman, the kingdom’s current capita, appeared. The region, situated on the margins of the main intellectual centres of the Levant, did not receive a systematic exploration during the 19th century, but its proximity with the Holy Land did still favour the presence of visitors. This was the case above all for the Dead Sea, which was explored early on, or the archaeological sites of the Transjordan Highlands that overlook it. So it was that the Hellenistic palace of Hyrcan at Iraq al-Amir was visited in 1862 by Melchior de Vogüé, then in 1863 by Félicien de Saulcy, who made the first map of it, while those of the citadel of Amman and the site of Hesban were drawn up during the same journey in which the Byzantine remains of Madaba and Mount Nebo were also visited.

In 1867, Ernest Renan took the initiative to create, under the aegis of the Académie des Inscriptions et Belles Lettres (Paris), a Corpus Inscriptionum Semiticarum (C.I.S.), a collection aimed at bringing together all of the Phoenician, Punic and Neo-Punic, Aramaic, Palmyrenian, Nabataean, Hebrew and ancient Southern Arabic inscriptions. This initiative established Paris as an Orientalist research centre, at the time bringing in several European scholars (e.g. the German Jules Euting, or the British Charles Doughty…), thus supporting the birth of a French school of philology in this field, which is still alive today.

The founding in 1890 of the École biblique et archéologique française de Jérusalem by the Dominican Father Marie-Joseph Lagrange (1855-1938) stands as a major step forwards in the development of French research in Transjordan; it created the opportunity for new philological, archaeological and ethnologic explorations, which now made use of photography. Thanks to them, the EBAF today conserves, alongside one of the most remarkable Middle-Eastern libraries, an exceptional collection of between 15,000 and 18,000 glass plates going back to this pioneer work, almost three quarters of the shots being produced by the Fathers Antonin Jaussen (1871-1962) and Raphaël Savignac (1874-1951). These explorations, which provide us with an extraordinary record of the management of this region by the Ottoman authorities at the end of the 19th century, its colonisation by Caucasian communities and its progressive modernisation during the British mandate, also focused on the construction by the Ottoman authorities of the Hejaz railway, thus easing the travel of scholars and access to sites which had hitherto been difficult.