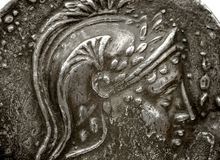 The Latakia trove is a collection of silver coins dating from the 2nd century BCE which was discovered in 1759, buried in a vase on the Syrian coast, near Latakia. The exact number of the coins that it contained is unknown: probably over a hundred.

This trove is currently conserved at the Département des Monnaies, Médailles et Antiques of the Bibliothèque Nationale de France. Its interest is twofold. On the one hand, it bears witness to the monetary circulation on the coasts of the Levant during an agitated period of its history. On the other, it was the first batch of coins to have been studied in a scholarly and systematic way, in the mid 18th century.

The interest in such troves does not of course date from yesterday. The first scholarly examination dates back to 1765, in a volume entitled Mélange de diverses médailles, pour servir de supplément aux Recueils des médailles de rois et de villes, Paris, 1765. This was the work of Joseph Pellerin, an enthusiastic collector who brought together a good 35,500 Greek coins, and drafted a catalogue. This collection was then purchased in full by the Cabinet du Roi, the ancestor of the Département des Monnaies, Médailles et Antiques at the Bibliothèque Nationale de France. The presentation made by J. Pellerin of this discovery is astoundingly precise and brings out his scholarly qualities. The geographical origin of the trove is established quite precisely thanks to information provided by the person who sold it in Latakia before disappearing: for this trove was purchased for Joseph Pellerin by one of his contacts in Syria, without any other middleman. The physical appearance of these coins, which Joseph Pellerin called “médaillons”, is described quite delightfully, giving a clear idea of what the trove looked like when the researcher acquired it, and before the pieces had been cleaned:

“They were as black as old lead, and most of them so covered with stubborn earth sticking to their material that no one would ever have taken them for silver, had some of them not been broken on the site and before buying them. The earth was attached, and practically incorporated into them, to such an extent that it was only thanks to a great effort and patience that we managed to cleanse them. It is thought that there had been a fire in the place where they had been stocked, with several of them having marks apparently coming from undergoing a violent blaze. Otherwise, most of them are extremely beautiful and intact.”

In the 18th century, Joseph Pellerin’s find was introduced into the general collection of the Département des Monnaies, Médailles et Antiques, but without being labelled specifically. It has been necessary to make a particularly attentive and thorough analysis of the engravings in the Recueil to identify a few of them. Those that currently identifiable bear the traces of a rather disrespectful cleansing that has left deep scratches in the metal. J. Pellerin stated that “these medals […] number over one hundred”, without being any more specific. The rest of the description is above all focused on the rarity of these coins, but without drawing up a list of them, as would have been done today. Instead, it analyses each of the coins that are judged to be interesting, while making an historical commentary, whenever this is possible. This discussion focuses on the workshops and dates, based on the local calendars, the marks of control placed on the coins, the varieties, the portraits of the kings and the history of the kingdoms and cities, as well as dating the trove. They were coins of the kings who succeeded Alexander the Great in the East (Alexander himself, Lysimachus, the Seleucid kings, Mithridrates III), or else from the cities of Asia Minor (the Ilian confederation, Alabanda, Side) and the Levant (Arwad). They were buried in about 169 BCE.

The discussion is conducted with a quite admirable erudition and perspicacity. What should be emphasised is the new approach of Joseph Pellerin who, in this examination, opened the doors of modern numismatics: the provenance, content, number of specimens and their physical state were described carefully in detail. Three plates illustrate the most important coins, whose production sites had been identified thanks to great perspicacity. For the first time in history, Joseph Pellerin examined the burial date of a trove. And, for the first time, he considered a trove to be an archaeological find which, in his opinion, could be the trace of a merchant’s travels. In fact, these silver coins had travelled during the wars between Hellenistic kingdoms, probably to pay the armies.

Joseph Pellerin limited his examination to novelties: “After discussing the medals of Mithridates and those of Alexander, coming from the batch discovered near Latakia, there is little to say concerning the medals from other kings that were found there: they feature nothing that is unknown”. He thus had the spirit of an 18th-century collector, trying to fill in the gaps of an already familiar set, rather than with a view to building up copies, with a view to carrying out a quantitative study. But the main point has already been stated. Joseph Pellerin raised the big questions which we are still attempting to answer when analysing such troves.