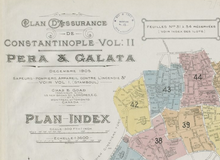 The fire insurance maps of Istanbul by Ch. E. Goad and J. Pervititch
Jean-François Pérouse, director of the IFEA, agrégé des universités, doctor of geography and lecturer in Turkish at INALCO
Access to documents

The map collection of the Institut Français d’Etudes Anatoliennes (IFEA) in Istanbul includes two series of fire insurance maps of the greatest interest for the social and economic history of the East Mediterranean. One dates from the start of the 20th century and the other from the period 1920-1945.

They both stand as fascinating sources of reference, and are highly sought-after and often consulted for the wealth of information they contain. This is because their objective was to map out the fire risk for the insurance companies that commissioned them, by providing as much data as possible about buildings’ characteristics and sources of vulnerability. Thus, the scale of the Goad plans is 1/600th (and 1/3600th for the global plans); the Pervititch maps are even finer, varying from 1/250th to 1/1000th (except for a few plates of the Anatolian bank and the index and global plates). The production of these maps was directly connected to the emergence of an insurance economy at the end of the Ottoman Empire, which was itself an expression of the weight of Western and European interests in the region. This is the reason why the zones represented by Goad and Pervititch (to a lesser degree) are very targeted and carefully selected according to a request coming only from particular milieus. The image of the urban spaces which is suggested by these documents is thus rather partial. But it is still precious.

The civil engineer Ch. E. Goad (born in 1848 in London) was a genuine cartographic entrepreneur; from 1881, he was at the head of a specialised company (Insurance Society) established initially in Canada, then also in the UK; it subsequently operated in North America and in Europe (including France), then, as of 1895, throughout the entire world, without forgetting the Ottoman Empire.

His life and considerable output are well known [1], even if the conditions of his stay and work in the Ottoman capital are less so.

In comparison, the topographical engineer Jacques Pervititch was a more modest, local and artisanal cartographer, but who nevertheless set himself in the heritage of Goad, since he made explicit reference to him in his maps. Although working, like Goad, for the “Syndicate of Fire Insurance Companies Operating in Constantinople[2]”, a union set up in 1900, he still remains very little known and was little recognised in his time (all we know is that his proposals to work with the Western urbanists then operating in Turkey were turned down). He was a Levantine, a Catholic of Serbian origins, born in Constantinople circa 1878, and he then took his secondary education with the Lassallians of Saint-Joseph in Moda (he graduated in 1895). As an independent producer, he seems only to have worked in Turkey - in Istanbul, Izmir, Trabzon, as well as the Dardanelles and Bursa (Prussa) – in a close relationship with the Lassallian and Assumptionist milieus of the time. After 1940, the engineer’s name was Turkified into “Pervitiç” and the French language vanished from his plates.

The Ch. E. Goad series includes four lots of unequal dimensions: 3 “volumes” covering Constantinople; and one for Izmir (Smyrna). The Istanbul volumes are divided as follows: 20 plates for “Stamboul”, the term used in the early 20th century to describe the historical peninsula (or the Byzantine-Ottoman city); 18 plates for “Pera-Galata, that is to say the quarters situated on the other bank of the Golden Horn; and 14 plates for Kadıköy, the former Chalcedon, on the Anatolian bank of the Bosporus. Finally, the “Smyrna” volume – which portrays the harbour town before the great fire of 1922 – contains 11 plates. Each lot is accompanied by a global index plate.

[2] Which became the “Central Office of Insurers in Turkey” at the end of the 1930s.