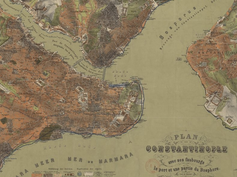 Maps and plans of Istanbul
Ségolène Débarre, lecturer at the University of Paris 1and associated researcher with IFEA
Access the documents

The collections of the French Institute of Anatolian Studies and of the Bibliothèque Nationale de France.

The maps and plans of Istanbul in the collections of the Institut Français d’Études Anatoliennes (IFEA) and the Bibliothèque Nationale de France (BnF) covering the period 1800-1930 mainly include maps of French or Ottoman-Turkish origins, and secondarily German. Their contents principally concern two registers: historical cartography and strategic cartography. The collection of the Institut Français d’Études Anatoliennes (IFEA) features around thirty maps in the former register, including a dozen specifically for Istanbul, and over 200 sheets of military cartography, of which a good thirty focus on Istanbul and its outskirts.

As a model of the former genre, the cartography of Jean-Denis Barbié du Bocage (1760-1825), Jean-Baptiste Bourguignon d’Anville’s last student, was used throughout the 19th century in French schools. His maps of Constantinople and the Turkish straits above all provided the illustrations for Jean-Jacques Barthélemy’s Voyage du Jeune Anacharsis en Grèce, published for the first time in 1788. At the time, the French ambassador in Constantinople, Count Choiseul-Gouffier, ordered fresh surveys to be made of the Ottoman capital, which were carried out by the engineer François Kauffer (1751-1801). He also produced an original triangulation of the Bosporus in 1786 and a precise topography of the Ottoman capital. His work was continued in 1812-1814 by Lieutenant-General Antoine-François Andréossy (1761-1828) who conducted research into the hydrographic network of the region of Istanbul, before Russian and British cartographers replaced the French during the first half of the 19th century.

During the second half of the 19th century, printed cartography became common Istanbul: plans of the city accompanied the travel guides that targeted the increasingly numerous European tourists in the Ottoman capital. For example, the Prussian officer Carl Stolpe made plans of Constantinople in the 1860s. Their second edition, published in Istanbul by Lorentz & Otto Keil, was accompanied by explanations in French and German, with plentiful information about the historic sites. Different colours clearly distinguished the town’s various quarters, “according to their religious composition”, as well as their cemeteries. In later editions, blue lines indicated the urban and interurban railways. As proof of their success, Stolpe’s plans went through numerous editions until the end of the century.

The aim of strategic cartography, the second register in the collection, was to gain knowledge of the territory, so as to defend vulnerable sites. Cartographic production thus increased during and after each conflict, in particular during the Crimean War (1853-1856). The “theatre of war maps”, published at the time, indicated the movements of armies, the systems of defence, as well as resources and commanding positions. The Bibliothèque Nationale de France preserves several examples, showing the curiosity of the European public for distant wars of unusual amplitude.

The strategic maps of Istanbul grew more precise at the turn of the century. Charged with an educational mission to the Ottoman Empire during the 1880s-1890s, the German officer Colmar von der Goltz directed the surveys for a new map of the city and its outskirts [1]. Published at a scale of 1/100 000, this map includes the forestry and rural hinterland, while highlighting the axes of communication and the water courses that supplied Istanbul from the borders of the forests. Aware of the gaps in its cartography, the Ottoman government authorised the calculation of a geodetic baseline in 1896, in the region of Eskişehir. As a patriotic project, a cartographic commission was set up after the Revolution in 1908, with the mission of mapping the entire territory at a scale of 1 / 25 000, starting with a measurement of a geodetic baseline in Bakırköy, on the western edge of Istanbul. When the Balkan Wars broke out, and then the First World War, the priority became the mapping of the most strategic and vulnerable regions: the region of Istanbul and, in 1914, the frontier region with Bulgaria (Edirne-Kırklareli) on the one hand — in all 1,000km², mapped on 8 sheets — and the Dardanelles (in particular Seddülbahir and Kocadere/Kurucadere) — on the other, a peninsula covered by 10 sheets at a scale of 1 / 25 000 in 1914 and 36 sheets in 1915.

The production of this topographical series by the army continued until the early 1930s, as can be seen in the collection of the Institut Français d’Études Anatoliennes which covers the entirety of the period. These topographical maps, in Turkish, are extremely precious when it comes to following the territorial and toponymical evolution at the end of the Ottoman Empire, and during the beginnings of the Republic, at a time when there was much, major social upheaval, whether it be in the arrival of refugees from the Balkans, the Armenian genocide or else the exchanges of the Greek-Turkish population, and their territorial consequences.

Maps and plans of Alexandria
Alexandria : the “Tram” symbol of modernity