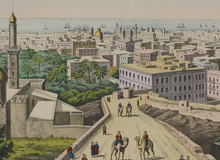 At the end of the 18th century, Alexandria seemed to be a declining city, in comparison with its former glory, and the members of the expedition to Egypt described nothing but ruins and desolation.

It is difficult to estimate its population at the time – a reasonable approximation would be around 15,000 inhabitants – on the other hand, its commercial and military role remained important: as the commercial outlet of Egypt and its distant hinterland (Arabian Peninsula, India and the Far East), it was one of the main sources for food supplies (corn, rice), military materials (ropes, tow, caulking) and the exotic products of the Ottoman Empire.

The documentation drawn up by the members of the expedition to Egypt provides us with a vision of a city separated into two unities: on the one hand, the Ottoman town founded in 1517 on the tombolo situated between the island of Pharos and the continent, and, on the other, the old town, surrounded by the Tulunid wall, with a few inhabited zones, but above all orchards and fields of ruins. Three ancient monuments caught the attention of scholars, just as they had the travellers of previous centuries: the catacombs of the Necropolis, the so-called Pompey’s Pillar, erected in honour of Diocletian in 297 inside the temple of Sarapis, and “Cleopatra’s Needles”, obelisks of Thutmose III, which Augustus had brought from Heliopolis in 13 BCE, and which signalled the arrival of the imperial cult in the temple.

The brief French occupation certainly led to the reinforcement of the city’s fortifications and an improvement of the houses in the “free” quarter. After the troubled years that resulted in Mohamed Ali eventually seizing power, the city experienced a revival in both its commercial and municipal activities. The digging of the Mahmudieh Canal, under the direction of the architect P. Coste (1818-1821) provided a regular water supply, while connecting the port with the rest of Egypt, and inciting the extension of farmland and rural housing. The fortifications were modified under the direction of P. Coste, then during a 2nd phase (1840-1860) under the Colonel of Engineers B. Gallice. The expansion and development of the port and arsenal (1835-1840), thanks to L.Ch. Lefébure de Cerizy and D.E. Mougel, also played a considerable role. In this military port-town, near the East Harbour, which was the only one available to them until 1830, the “free” tradesmen and European consuls developed a new, airier quarter, around the former Place d’Armes, which in 1855 became Place des Consuls, and then in 1867, Place Mohamed Ali (it was here that in 1872 an equestrian statue of Ali was erected by Henri Jacquemart). Shippers and dealers in exportable products, tradesmen opened their counters in Minet el-Bassal (the onion harbour) at the mouth of the Mahmudieh Canal.

The production and trading of cotton, encouraged by the introduction into Egypt of a long-stalked species by L.A. Jumel in 1823, experienced a boom in the 1860s, because of the absence of supplies from the USA, during the Civil War. At the same time, under the reigns of Abbas, and then of Ismail, the modernisation of the means of transport (high-tonnage steamships, railways between Cairo, Alexandria and the rest of Egypt), telecommunications and the harbour of Alexandria itself, placed the city in the worldwide economic domain. Far from endangering Alexandria’s trade, the opening of the Suez Canal favoured it, by confirming its predominance over Egyptian traffic. This period witnessed the arrival of foreigners (European subjects or from protectorates and Ottoman subjects), rising from 11% of the population (104,189 inhabitants) in 1848, to about 20% of the population (232,000 inhabitants) in 1882.

The confrontation between the European powers and the Egyptian nationalist movement, which led to the bombardment of Alexandria by the Royal Navy in July 1882, resulted in the installation of British colonial economy and control. The European quarter was rebuilt, with renovations of Mohamed Ali Square and the French gardens, extending towards the East, Cairo station and the Rosetta Gate. The 1882-1890 period witnessed the birth of the Municipality of Alexandria, whose Egyptian and European members, from the wealthy upper-middle or business classes, saw their mission to be the management of the urban environment, from the roads, water and lighting, to sanitary services. Their language of communication was French, which had replaced Italian in the 1860s.

Up until the First World War, these Mediterranean notables – Levantine, Greek or Jewish – who were very well established in Egypt, incontestably dominated the city, which had about 400,000 inhabitants in 1907. They brought in all the elements of a European city: a stock exchange, insurance companies aimed at protecting their warehouses and main residences, trams, a cornice by the sea thanks to an embankment, cultural and sporting establishments with in particular the Graeco-Roman Museum, the San Stefano casino in the resort of Ramleh, or later on the stadium of Alexandria, as well as religious, educative and charitable establishments for each of their communities.

During the First World War, Alexandria was the rear base of the Eastern Front and, in 1917, during the invasion of the Dardanelles, it was transformed into a hospital town, with camps for the allies, the interned and prisoners.

The nationalist movements of 1919, the Egyptian nationality act of 1926 and the Montreux Convention in 1937, which put an end to the system of Capitulations, contributed to the difficulties of the British order, the autonomy of the Levantine bourgeoisie and the free-trade economic model, but it was only much later, in 1952 and 1961, that the divorce was to be consummated between the communities that had now become minorities, and the indigenous population that had now become full Egyptian citizens.

The Thousand and One Nights
Constantinople / Istanbul