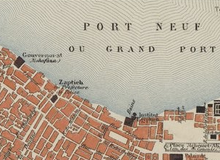 As of the second half of the 19th century, at the same time as the development of Alexandria, maps multiplied to answer to a varied clientele – state bodies, business establishments, the general public and tourists – constituting with previous maps and plans, for travellers or scientists, a particularly rich corpus.

The first depictions of Alexandria are oblique projections – the oldest one going back to the second half of the 15th century – and nautical charts. At the end of the 17th century there appeared the first geometrical plans of the city, made by Étienne Gravier d’Ortière and Razaud, a military engineer.

The first modern plans of the city, produced by scholars with the expedition to Egypt (1798-1801) mark a decisive step in Alexandrine cartography, both in terms of the degree of detail and in the precision of the reproduction. Despite its military origins, this topography also took an interest in the historical aspects of the city. For Alexandria, the work of the various engineer corps led to three essential maps published in the volumes of the Description de l’Égypte.

Comparison of the 1806 plan by Henry Salt (1780-1827), with that of Charles Müller made in 1855, shows up the large-scale work that had been carried out by the Viceroy Mohammed Ali, including the new route of the canal, then called the Mahmoudieh Canal, and the urbanisation of the south of the isthmus, with the demolition of the North-West wall. There then arose the European quarter, developed around the “Grande Place” – later called “Place Mohammed Ali” or “Place des Consuls” – as well as the renovation of the quarter of Ras El Tin around the Palace, the emergence of the quarter of Minet el Bassal with warehouses and stores, and the initial facilities in the West Port.

In 1865, Mahmud Bey El Falaki (1815-1885) drew up a map, which is extraordinary in its precision and the quantity of details that had been noted and reproduced. The wealth of this documentation was heightened by the presence of a list of 855 toponyms. In 1866, a Map of the Outskirts of Alexandria and a plan reconstituting ancient Alexandria also appeared. One of the first reconstitutions of the old town was published in 1731 by P.-N. Bonamy (1694-1770), but the one by Mahmud Bey El Falaki, being a genuine precursor on this topic, lay at the origin of many other later maps. This type of cartography relies on elements that have not just been observed, but also supposed, and unites synthetically archaeological results and historical hypotheses, as can be seen in the restitution of antique monuments on the modern grid, as drawn by Mariano Bartocci (1881-1929) and published in 1914 by Evaristo Breccia.

The guides and directories of Egypt, which boomed after the 1860s-1870s, provide another cartographic source, as some of them were accompanied by plans of Alexandria. They include such famous tourist guidebooks as Baedeker, Joanne, Murray, Cook, but also directories published by J. Millie or E. François-Levernay.

The large corpus of insurance plans (almost 150 documents made by six contributors) show that Alexandria witnessed a real market for this type of plan, between 1880 and 1950, intrinsically linked to the cotton trade. These plans mainly cover the quarter of Minet el Bassal, where could be found the cotton warehouses (chunahs), on a strategic site: on both sides of the Mahmoudieh Canal for the arrival of cultivated cotton from all of Egypt, and on the edge of the West Port for its exportation. The elements gathered together on these plans are particularly rich. The codification and the updating system are typical of this kind of plan, so as better to gauge fire risks. The inter-indexation between documents by different authors is indicative of the great competition that existed in Alexandria in this field. The authors, such as C. Marchettini, lived in Egypt, with the exception of Charles Edward Goad (1848-1910), who developed his activities in the production of insurance plans above all in Great Britain and Canada. But, during the same period, he also produced insurance plans of Cairo, as well as of cities in Turkey (Istanbul, Izmir).

After a bilingual Arabic/French plan of Alexandria had been made in 1887 by the Tanzim (the urban road network department), other administrations produced plans during the early 20th century: for example, there are numerous maps, on various scales, in the Survey of Egypt, as well as that of the Alexandria Municipality in 1902. In 1919, the head engineer of the Municipality, William H. MacLean, suggested producing an urban planning scheme, published in 1921. Alongside these institutions, private publishers marketed plans of the city, such as Alexandre Nicohosoff, whose two maps made in the 1930s, of Alexandria and Ramleh (then a holiday suburb to the east of Alexandria), also pay witness to the rampant urbanisation of the city.