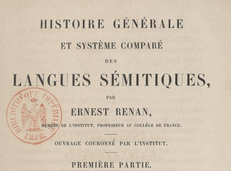 The general history and comparative system of the Semitic languages, by Ernest Renan. 1863
Domenico Paone, EPHE PhD, director of the Renan Group in ITEM (UMR 8132 CNRS / ENS)
Access to document

Influenced by German philology, Ernest Renan’s early work was based on linguistics (“De l’origine du langage” was published in 1848). L’Histoire des langues sémitiques (1855) remains his most representative work in this field, and also the most controversial.

In 1847, the jury of Prix Volney at the Institut de France awarded its gold medal to an Essai historique et théorique sur les langues sémitiques en général et sur la langue hébraïque en particulier. Its twenty-four-year-old author, Ernest Renan, had set about doing “for the Semitic languages what M. Bopp has done for the Indo-European ones”. In other words, the objective of this thesis – whose manuscript can today be found in four notebooks conserved at the library of the Institut de France – was to draw up a comparative grammar of Semitic languages, following the lead of the famous German philologist and linguist, who in 1833 had started to publish his Vergleichende Grammatik des Sanskrit, Zend, Griechischen, Lateinischen, Litthauischen, Gothischen und Deutschen, of which the sixth and final volume appeared in 1852.

Renan published his essay in 1855, with a title that displayed more clearly the scholarly current in which he wanted to place his work: Histoire générale et système comparé des langues sémitiques. However, in the preface, he did still acknowledge that the general historic introduction, when the thesis was turned into a book, had grown increasingly large, until it had become “half the book itself”. He then decided to divide the book into two parts, one historical, the other theoretical, and to publish the latter part later. But this second theoretical volume, which was to contain the “comparative system of Semitic languages”, despite being announced in the prefaces to the second (1858) and third (1863) editions, never saw the light of day. In a form of anticipatory justification, Renan declared in his 1855 preface: “Since languages are an immediate product of human consciousness, they constantly change with it and, in a sense, a real theory of languages is nothing other than their history”.

Books II, III and IV of the work retrace the three periods of the development of Semitic languages (Hebrew, Aramaic and Arabic, with their subdivisions in branches). But it was above all books I and V, “Questions of Origin” and “Conclusions”, in which Renan constructed a genuine theory of “Semitic peoples”, which, doubtlessly without any intention on the part of its author, was to have a significant posterity in the scholarly anti-Semitism of the 19th and 20th centuries. By following romantic German theories, according to which languages are closely bound to the spirit of each people, Renan transposed a series of linguistic considerations into an ethno-cultural issue. So it was that the Semites only recognised themselves “in negative terms”, given that they had no mythology, science, philosophy, curiosity, objectivity, sense of nuance, visual arts, epic, political life, organisation, or variety. “The Semitic race,” wrote Renan, “compared to the Indo-European race genuinely represents an inferior combination of human nature”. A single quality, the religious instinct, is the exclusive privilege of the Semites: “MONOTHEISM sums up and explains all of their characteristics”.

Renan was to specify and clarify in his later works, above all after 1870, his positions concerning the “sensitive” questions of race and anti-Semitism, while enriching his arguments with a depth and nuance that were clearly missing from his Histoire des langues sémitiques. However, the idea that monotheism was a sudden and immediate intuition among the Semitic peoples (a characteristic that Renan also considered to be of capital importance for the progress of humanity) was for ever to remain the driving force of his life’s work. This theory was to lead to long controversies with other scholars, including some of his colleagues from the Société Asiatique, who on numerous occasions blamed him for his dogmatic refusal to admit the proofs, coming from Phoenician epigraphy or research into Assyrian, of the historical evolution– from polytheism to monotheism – of Semitic religions.