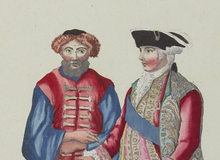 In the Échelles of Levant, because of the language barrier, the dragomans, or interpreters, were an indispensable cog in the wheel in the relationships between the French who had moved there and the Ottoman authorities.

The lack of reliable indigenous dragomans led Colbert to set up the École des Enfants de Langues in 1669. The students were initially trained in Paris at Collège Louis-Le-Grand, run by Jesuits. At the age of twenty, this training was then concluded in Istanbul, still under the direction of the Jesuits. Access to this training was open to the sons of merchants or dragomans. So it was that real dynasties of dragomans arose. In 1762, the expulsion of the Jesuits resulted in the collapse of the level of teaching, to such an extent that, at the end of the Ancien Régime, there were plans to close the school. It then vegetated during the Revolution and the Empire. However, thanks to the presence of renowned teachers, its prestige rose again between 1820 and 1830. It then lived on until 1893. The founding of the École des Langues Orientales in 1795, and the quality of its teaching proved fatal to it.

Some dragomans, such as Venture de Paradis, had remarkable careers. Pierre-Jean-Marie Ruffin belonged to this group. He was the son of a dragoman killed in the service of French interests. Born in 1742, he entered the École des Enfants de Langues in Paris in 1750 then left for Istanbul in 1758. In 1767,  he was made dragoman for the Crimea by Vergennes and accompanied Baron de Tott on his mission in the region, and followed the campaigns during the Russo-Turkish War. After returning to France, Ruffin went back to Istanbul as the first unofficial French dragoman, as he was still officially a dragoman in Crimea, and negotiated with the Porte under the orders of Saint-Priest. After being summoned to France, he became secretary-interpreter of the King and was in charge of all the correspondence with the Orient. In 1784, he was appointed professor at the Collège Royal, a post which he kept until 1822. He was ennobled and decorated with the Cordon de Saint Michel for his services. He got into difficulties during the Terror, but in 1793 he was named the premier secretary of the French legation and first interpreter. Ruffin was accompanied by his son-in-law and daughter. With her as his intermediary, he entered into contact with the harem, which had a great influence on the sultan. Ruffin obtained various advantages, such as the protection of France for Catholics in the Orient. During the Egyptian Expedition, he was imprisoned in the Fortress of Seven Towers, like other Frenchmen, and liberated after the evacuation of Egypt. France then regained all its rights, thanks to Ruffin. He was highly esteemed by the Ottoman dignitaries and other foreign diplomats. For this reason, he received the Légion d’Honneur in 1804. In 1806, he convinced the Sultan to recognise Napoleon’s title of Emperor. In 1807, Turkey resisted the British ultimatums. In 1814, the restored monarchy considered recalling him to France, after the episode of the Hundred Days. In 1819, Louis XVIII confirmed his membership of the Order of Saint Michel and his functions as secretary-interpreter of the King and councillor to the embassy of France in Istanbul, where he remained until his death in 1824. He was buried with full honours by the Ottoman authorities and the other foreign legations.

Jean-Michel de Venture de Paradis was born on 8th May 1739 in Marseille in a family of diplomats and soldiers. After studying at Collège Louis le Grand and taking a course in Istanbul, he occupied several posts in Syria, Egypt, Morocco, Tunisia and Algeria. He was also the interpreter of Baron de Tott during his inspection of the Échelles. Finally, he was secretary-interpreter of the embassy of France to the Porte. In 1797, he was in Paris having been appointed to the chair of Turkish at the École des Langues Orientales. After becoming the military interpreter of the Armée d’Orient in Egypt, he died in Acre or Nazareth, of the plague or dysentery in Avril or May 1799, no one knows.

Most dragomans had far less prestigious careers than Ruffin or Venture de Paradis. However, their interventions were indispensable for the smooth running of the French community in an Échelle. The dragoman was the indispensable intermediary between the Ottoman authorities and the consul. Not only did he act as a translator, but he also assisted French subjects before the cadi during a trial. He could also investigate outside the consulate to verify the grounds of a complaint against a pasha. The dragomans were the first victims of violence from angry pashas and this was not always feigned. Some dragomans were beaten and even thrown into gaol. But the convergent interests of France and the Ottoman Empire, as well as the quality of the French dragomans, favoured the rise of Francophilia in the Ottoman Empire, especially in the administration during the Tanzimat.