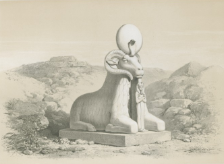 As a skilful draughtsman and tireless polygraph, Émile Prisse d’Avennes was the author of a protean body of work about the ancient and medieval monuments of Egypt, discovered thanks to his recruitment in 1827 from the Egyptian military school, after training as an engineer at Arts et Métiers.

As part of the category of “men of art”, coming to the sciences of the antiquity after starting out in civil engineering or architecture, this amateur archaeologist left his job in Egypt in 1836 to commit himself totally to research set at the crossroads of art and history. The entire chronology of Egypt interested him, from the remains of the ancient Egyptians to the material culture of modern Egypt. As an autodidact with a steamy temperament, a man in the field rather than the study, he left behind an extremely varied bibliography. He was also known as Edris-Effendi, while sometimes also using the pseudonym P. du Boulery

Thanks to his technical training, Prisse first started studying the “Egypt of monuments” (the overall title initially given to his work) with genuine advantages. He was an excellent copyist, with an “elegant and faithful pencil”. The years spent in the service of the Egyptian government gave him an unrivalled knowledge of the country, its language and customs; wearing the local costume, he was capable when necessary of passing himself off as a Muslim, even though nothing actually shows that he really converted to Islam. He turned this familiarity into a method: “It is by entering body and soul into the lives of Muslims, by speaking their language, by respecting their religion, and by espousing their prejudices that I have managed to enter as best I can into the habits and customs of the Arabs of yesteryear,” he wrote in his notes, as preserved in the department of manuscripts at the Bibliothèque Nationale de France.

While living in Luxor, from 1839 to 1843, Prisse familiarised himself with hieroglyphs, by examining at the ruins and thanks to determined efforts; he also led prospections and excavations at his own expense in the region. In order to determine the succession of reigns and the order of the builders of the temples, he investigated all the inscriptions that concerned the royal chronology. As an excellent observer, he identified the Karnak King List in the Festival Hall of Thutmose III, with its walls listing sixty-one rulers, which he had removed and taken to Paris, because of the threat posed by the vandalism of the times. After entering the Bibliothèque Royale, this piece entered the Louvre in 1917. He also provided the Prisse Papyrus, one of the best conserved literary manuscripts from ancient Egypt.

His curiosity for ancient recycling, which is extremely abundant in Islamic architecture, led him into a large number of sanctuaries; he became an excellent connoisseur of their architecture and decor, and made many drawings and stamps of them. Obsessed with detail, Prisse applied to the sites of Cairo “the chronological and methodical study” which he had used in Egyptian temples, without abandoning an artistic viewpoint: “The farther I go in my study of the monuments of Cairo, the more I delightfully admire Arab artists,” he noted.  From the seventeen years he spent in Egypt, Prisse brought back observations on the administration of the country, the Nile’s peasant population, and everyday objects. An initial series of publications illustrated by an Egyptological, ethnographic or political approach was the result.

In 1858, Prisse obtained public financing for a return to Egypt, this time with the draughtsman Famars Testas and the photographer Jarrot. He was one of the first people to use photography systematically for the recording of sites. During two entire years, the three men drew, made stamps and photographs, in sometimes trying conditions, of sites in Cairo, and then in the Nile Valley. This new harvest allowed him to finish off his great Egyptological work and gave life to his final publishing project: a major atlas of Arab art. Almost ten years of determined work were required to round off this luxurious enterprise, with 200 lithograph plates, 175 in colour. A volume of erudite texts rounded off the whole in 1877. The archaeologist died two years later in Paris in a mood of general indifference.

However, his work was not entirely forgotten, mainly for iconographic reasons. Used by a series of publishers once they had entered the public domain, his illustrations were frequently reproduced, but rarely with the accompanying text. None of the republications of L’Art arabe… (the most recent one dating from 2010) has been a critical work, the plates being simply reproduced, with their out-dated captions. Many of them have been used by ornamental artists as models for interior design. Prisse himself predicted that his atlas would remain “a progress in the sciences, despite it all”.
Image caption : Sculpture. Béliers. Temples de Mauth et Khons. XVIIIe dynastie
Louis Vignes (1831-1896)
Arthur-Ali Rhoné (1836-1910)