On 3rd September 1783, in Paris and Versailles, several peace treaties were signed by the American Congress of Representatives, Great Britain, France and Spain, putting an end to the American War of Independence. A fourth and final treaty was signed on 20th May 1784 between Great Britain and the Provinces. This corpus of texts makes up what is called the “Peace of Paris”.

After the capitulation of the British forces in Yorktown on 19th October 1781 and the fall of Lord North’s cabinet on 22nd March 1782, it became obvious to London that diplomacy was the only way to end this conflict. Negotiations were clearly complex given how the allies’ war objectives were divergent or even opposed. The Congress of the Confederation or the United States in Congress Assembled demanded the independence of the Thirteen Colonies in a broadened territorial context close to the situation that emerged from the Treaty of Paris of 1763, thus without the highly favourable modifications conceded to Canada by the Quebec Act of 1774. It did not want to lose the trade advantages that the colony benefited from, in particular with Great Britain, so as to develop the incredible economic potential of the new state. France also desired there to be a setting-up of an independent state in America, but without it being more powerful than before the conflict. It was thus opposed to any territorial extension to the detriment of Canada, as reclaimed by the American plenipotentiaries. It should be highlighted that at no time did France plan to claim the restitution of the North-American territories which had been lost under the Paris Treaty of 1763. Above all it wanted to establish exclusive trade relations with the future USA, so as to be able to enrich itself to the detriment of Great Britain. Finally, Spain wanted above to recover Gibraltar which had been lost to Britain under the Treaty of Utrecht in 1713. It also had its eyes on Florida which it had occupied in part after the victory of Pensacola 1781. The French State Secretary of Foreign Affairs, Charles Gravier de Vergennes, was thus convinced that negotiations should be carried out in a more general way, to avoid Great Britain ceding rapidly to the demands of one party or another, so as to shatter the alliance.

London wanted above all to make the most of the divergences between the French and Americans so as to obtain a more advantageous agreement and thus start up secret negotiations with the plenipotentiaries of the Congress of the Confederation. At the same time, there was the official opening of talks between all the belligerents which started in May 1782. The territorial negotiations were bitter, with the British being very close to giving up Gibraltar rapidly so as to divide the French and the Spanish. Furthermore, France was opposed to the claims of the Congress when it came to the acquisition of the Great Lakes region, the Ohio valley and Illinois (which Vergennes even described as “craziness”, in a letter to the diplomat Anne César de La Luzerne), while he wanted to confine the future state within the limitations as fixed by the Quebec Act of 1774. Yet, Vergennes knew that he needed to compromise if he wanted to get an overall agreement rapidly. Especially as the exchanges between the British and the Americans ended with the signature of a preliminary treaty on 30th November 1782, while the French knew nothing about its contents. It sorted out the border question, as well as the paying-off of loyalists, the refunding of American debts to the UK, or else the sharing of fishing grounds. When finally informed, Vergennes was furious and did not refrain from telling Benjamin Franklin that this signature contravened not only diplomatic rules but also the regulations of Congress (as an answer, several French allegories celebrated peace by presenting all the nations together, most with a victorious France). On 20th January 1783, the preliminary articles between Spain, France and Great Britain were finally signed and on 4th February a general armistice was declared. On 2nd September, a preliminary treaty was signed between Great Britain and the United Provinces putting an end to the fourth Anglo-Dutch War which broke out in 1780 when London learned of a projected trade treaty between the city of Amsterdam and the American insurgents, thus pushing the United Provinces into the camp of France and Spain.

The Treaty of Paris

On 3rd September 1783, there was firstly signed the Treaty of Paris between the Congress of the Confederation and the British crown. The latter recognised the independence of the USA, whose frontiers were set as the Great Lakes to the north, the Mississippi to the west and the 31st parallel to the south. Fishing rights were given to the Americans around the Great Banks, Newfoundland and the Gulf of Saint Laurent. Navigation on the Mississippi became open for both nations. Mutually contracted debts were to be paid. The Congress of the Confederation was to recommend to each state to watch out for the restitution of all the loyalists’ belongings. That same day, agreements were signed in Versailles between France and Great Britain (at the Hôtel des Affaires étrangères now the Bibliothèque Municipale) as well as between Great Britain and Spain. France recovered its full control over Dunkirk, recovered or had confirmed its ownership of the Saint-Pierre and Miquelon Islands, the islands of Santa Lucia and Tobago, Gorée Island and the Senegal River, as well as the Indian “comptoirs”. Meanwhile it ceded the islands of Grenada, Grenadines, Saint Vincent, Dominica, Saint Kitts, Nevis and Montserrat. On the banks of Newfoundland, it gave up its fishing rights from Cape Bonavista up to Saint-Jean Cape-Ferrat, but obtained in return the same rights from Cape Saint-Jean to Cape Raye. The British crown ceded to Spain Minorca and Florida, while  receiving in return Providencia and the Bahamas. Finally, in a treaty dated 20th May 1784, signed in Paris, Great Britain agreed to give back almost all of its captured Dutch possessions in the East Indies, while keeping Negapattinam on the Indian coast.

France coming out of the war

It is often thought that this French military victory re-established its honour and stands as a revenge for the disastrous Treaty of Paris in 1763. It gave back to France its role as an arbiter of European diplomacy. And yet this 1783 treaty changed nothing about France’s territorial or trade situation. Furthermore, the virtual monopoly of Great Britain over its former colonies survived American independence. Vergennes’s strategy of striking a decisive blow against British trade power thus turned out to be a crushing failure. Finally, France, like Great Britain too, emerged financially exhausted from this conflict with bottomless debts. In many people’s eyes, France’s human and financial sacrifices aided only Spain and the USA (several critical works were published, such as that of Abbé Raynal, which he was to disown in 1785). For the French people, and Paris in particular, a proclamation of peace is always a source of joy. This could be seen in this case in major festivities (distribution of victuals, fireworks) given in Paris on 14th December 1783.

Political Boundaries of North America after the 1783 Treaty of Paris 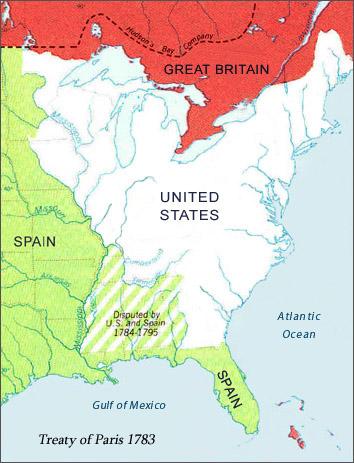