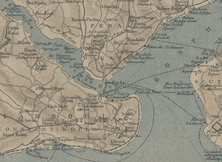 Travelling to Constantinople and the rise of tourism: maritime routes (the Danube and the Mediterranean), railways (the Orient-Express and Simplon-Orient-Express), travel agencies and the first airline (CIDNA).

It was necessary to await the second half of the 19th century for Constantinople to become accessible to a growing number of travellers, as means of transport developed with steamships and railways. Previously, this journey, which required lots of money, time and diplomatic support, had been reserved to a privileged, cultivated elite.

The communication axis, which connected Vienna to the Ottoman capital via Budapest, Belgrade, Bucharest and the Black Sea, remained the most often-used route to Constantinople, until the 1870s. However, the Danube circuit, whose enthusiasts vaunted its superb landscapes (“the banks of Austria, Hungary, Serbia, Moldavia, Wallachia and Bulgaria, bathed by the waters of this majestic river”) was soon rivalled by sea companies providing regular liaisons via the Mediterranean. Leaving from Marseille, travellers had the choice between a liner of the Messageries Maritimes (the first great maritime company founded in France, in 1851, ten years before the famous “Transat”) or ships from less prestigious, but often less expensive companies: Fraissinet, Fabre and N. Paquet. Travellers could also go to Trieste and there take the liners of the Austrian Lloyd. The Germans had the Norddeutscher Lloyd and the British the Peninsular and Oriental Steam Navigation Company whose priority nevertheless remained the passage to India.

While, as early 1853, the guide to the post-ships of the Levant opened to advise pleasure trippers, this title should not be taken at face value: the vast majority of passengers travelled from professional or familial necessity (tradesmen, government officials, diplomats, soldiers and priests) and the primary objective of maritime companies was to carry post, while calling in at ports according to a fixed itinerary. Actual cruises (an irregular voyage, following an established itinerary, punctuated by ports of call, on a liner full of passengers who had made reservations) were to appear only progressively, at the end of the 19the century. In France, they saw the day thanks to the initiative of the director of the Revue générale des Sciences pures et appliquées, seconded by an impressive research and patronage committee, with as its flagship destinations Greece and the Ottoman Empire. Several agencies also provided them, including Lubin (founded in Paris in 1874), Duchemin, or else Cook (founded in 1851, and a pioneer in the field of tourism, publishing a monthly magazine, The Excursionist, which was translated into several languages, as well as countless brochures and circuits).

Although both travellers and tourist guides constantly repeated that Constantinople was a city that should be discovered from the sea, the land route won out with the development of railway tourism. In 1889, the Orient-Express connected, without any load changes, Paris to Constantinople in under 68 hours, thus saving an extraordinary amount of time, in the greatest comfort (berths, a restaurant car, a smoking-room and library, a boudoir for ladies). To welcome these travellers, new, larger and more luxurious hotels opened their doors, including the famous Pera Palace, financed by the Compagnie Internationale des Wagons-Lits. The reduction in travel time led to a shortening of the stays, especially as a trip on board “this palace on rails”, which soon inspired both artists and novelists, was as important as the destination. While at the time of Gérard de Nerval, the average stay in the Ottoman capital had been three months, a few days were now enough.

After the First World War, the Orient-Express, replaced during the conflict by the Balkanzug (which connected Berlin to Sofia), re-adopted its initial route (Paris-Strasbourg-Vienna-Budapest) while the Simplon-Orient-Express took a more southern itinerary (Milan-Venice-Belgrade-Sofia). Inaugurated in 1930, the Taurus-Express, an extension of the Simplon-Orient-Express, after a ferry trip between the stations of Sirkeci and Haydarpaşa, took travellers either to Ankara, or to Aleppo and Cairo (though with the requirement of car transport between Tripoli and Haifa), or else to Bagdad and Basra (once more by road).

In 1923, the year of the proclamation of the Turkish Republic, a French-Rumanian air company started to fly to Constantinople, which had lost its status as a capital. Four years later, this became the CIDNA (Compagnie Internationale de Navigation Aérienne) and completed the circuit of the Balkans by reaching the airport of Istanbul (Yeşilköy) on a plane baptised “la Flèche d’Orient” (The Arrow of the Orient), to which Paul Morand devoted a novel of the same name in 1932. Aboard, there were at most ten passengers who set off from Le Bourget at 4 o’clock in the morning, before arriving, seven stopovers later, in Bucharest at 8 pm, then in Istanbul at noon the next day. However, as General Duval, the director of the CIDNA predicted: “The dream of the Orient has been eternal and the true international route will be by air.”

Caption of the image: Constantinople by L. Thuillier. From the Guides Joanne. 1916