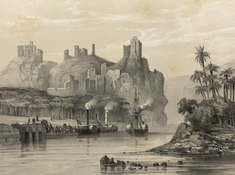 Editorial by Henry Laurens
Henry Laurens, professor at the Collège de France, chair of the Modern History of the Arab World

Behind political confrontations, there have always been exchanges and interactions for, despite certain claims to the contrary, the East and West are condemned to encounter one another constantly.

Quite clearly, the period between 1800 and 1945 can be defined as being imperial, or else “imperialistic”, even if these terms only became current at the end of the 19th century. The particularity of this region was the maintenance of a particular form of the state, the Ottoman Empire, and then the League of Nations mandates.

Both the exercise of foreign political and economic domination, as well as the will to resist, contributed to the constitution of the modern State, and its corresponding society. In other words, the change came as much from the exterior as it did from the interior, and produced massive transformations of societies. The desire to put together a nation state can thus go so far as genocide, and the First World War was deeply ravaging in this respect, as opposed to its successor.

The crucial change occurred with the advent of printing. There was then a shift from the timid beginnings devoted to administrative and military needs, the institutions that buoyed up modernity, with a tend towards a catching-up that included the publication of books, newspapers and periodicals. At the end of the 19th century, the great reviews combined literature and essays, and were the driving force of a literary renaissance that elaborated a new language of communication intended to combine clarity with elegance.

Printing obviously cannot be dissociated from a huge educational effort thanks to new schools. The modern State made a priority of establishments aimed at satisfying its most urgent needs when it came to the army, administration and services. European missionaries started up a vibrant competition between mostly francophone Catholics and Anglophone Protestants, ranging from primary education to the first universities. Afraid of being outstripped, Orthodox Christians and Muslims followed this movement.

Thus, a new group of intellectuals appeared, taking in charge the project of reforming society, and even religion. This renaissance was not just literary, it included the various redefinitions of both religious and national identities. Retrospectively, this era, which was initially judged harshly for its compromises with imperialism, was later to be seen as a kind of lost golden age. The nostalgia for a Levantine era was also that of a globalisation, dominated by Europe, but allowing for the freest circulation of people to this day.

Domination without knowledge is impossible. Obviously, there are discourses aimed at legitimising domination via the civilising mission of Europe, but it would have been ineffective without knowledge. There is thus an entire European literature concerning the Orient, which of course includes the description of its present state. Diplomatic correspondences fed into the writings of essayists, both in generalist reviews and specialised periodicals. Yet, Orientalism cannot be reduced to such circumstantial productions.

In its initial scholarly form, it was intended to save a culture in danger of disappearing, because of the rise of modernity. Its conservatism aimed at preserving a heritage, in particular via the publication of texts that had hitherto remained in manuscript form. This desire for Oriental conservation tends towards the past, but also gives the East an essentialist image, hence the paradoxical affirmation that Oriental modernity is nothing more than the artificial face of an eternal East.

In its second, scholarly approach, Orientalism combined the two powerful methodological instruments of philology and archaeology. The latter brought to light texts which the former deciphered, thus giving a voice to hitherto silent vestiges. Every twenty years, entire stretches of a previously unsuspected millennial history were thus revealed: so it was that the 1820s witnessed the deciphering of hieroglyphs and the birth of scholarly Egyptology, while the 1840s saw the deciphering of cuneiform and the establishment of Assyriology in the broad sense of the term, the 1860s then brought in the discovery of Phoenicia and biblical archaeology, then with the 1880s came the emergence of the Sumerians and Hittites, before the 1900s turned into the moment for Minoan Crete.

These long stretches of history raised again the question of the beginnings, and the origins of civilisations. By using philology, Europe invented an “Indo-European” origin, which was opposed to the “Semitic” East, but which was in reality just the transposition of a 19th-century situation into the distant past. For Oriental peoples, the emergence of these new millennia of history created a need for the writing of fresh narratives on which new nationalisms were based: Pharaonism in Egypt, Phoenicianism in Lebanon, and Syrianism. The early Arab nationalists thus attempted to integrate a Semitism, of which Arabs were just the current expression.

In this context, knowledge and ability are inexorably linked, but without being the monopoly of any particular camp. The glorification of an Eastern past by Orientalists was taken on by national movements as an instrument of liberation and promise for the future. While the East was condemned to being westernised, the West was becoming orientalised in travel writing to the Orient starting with Chateaubriand, in orientalist painting, with its refusal of industrial modernity, in music that borrowed “Oriental themes”, but also in the discovery of Oriental literatures which now went back several thousand years. Behind political confrontations, there have always been exchanges and interactions for, despite certain claims to the contrary, the East and West are condemned to encounter one another constantly, as the Saint-Simonians had already stated in the 1830s.